Danny Danon, Israel's Ambassador to the UN, welcomed Haley upon her arrival. 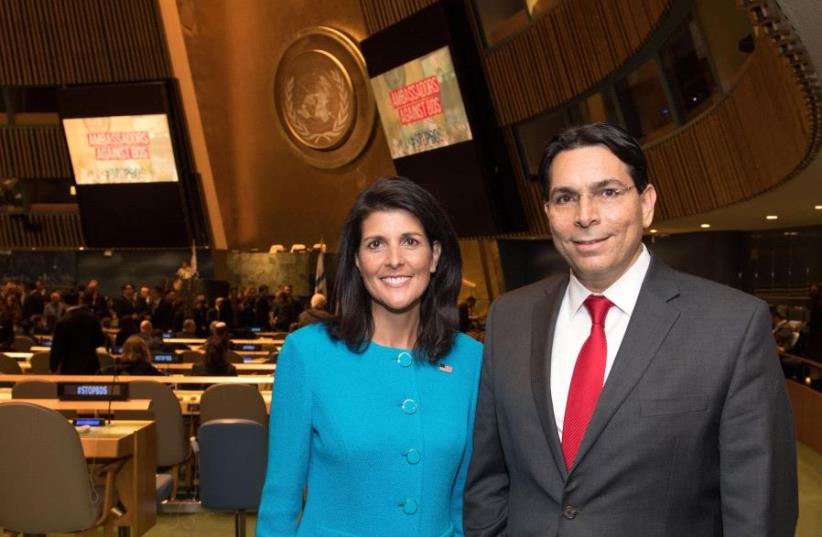 Ambassador Danny Danon and Ambassador Nikki Haley entering the UN General Assembly Hall
(photo credit: SHAHAR AZRAN)
Advertisement
US Ambassador to the United Nations Nikki Haley landed at Israel's Ben-Gurion Airport early Wednesday morning. Danny Danon, Israel's Ambassador to the UN, welcomed Haley on her arrival and will accompany the Trump envoy throughout her visit."The citizens of Israel are delighted to welcome you today in our country and thank you for standing strongly alongside us," said Danon. "We are hoping to introduce you to Israel in the coming days and further deepen the cooperation between us." Ambassador Haley is due to meet Wednesday with Prime Minister Benjamin Netanyahu and President Reuven Rivlin. During her three-day trip, Haley is expected to tour Yad Vashem and Jerusalem's Old City. The ambassador will also receive a security briefing from military officials on Israel's northern border. Haley will conclude her visit with meetings with senior figures from the Palestinian Authority.
Nikki Haley blasts UN rights forum for "chronic anti-Israel bias" (credit: REUTERS)
Before leaving for Israel, Haley on Tuesday threatened that America may leave the United Nations Human Rights Council unless it stops its "chronic anti-Israel bias."The United States is increasingly suspicious that the UNHRC “is not a good investment of our time, money and national prestige,” Haley said in a evening speech to the Graduate Institute in Geneva.“If the Human Rights Council is going to be an organization we entrust to protect and promote human rights, it must change. If it fails to change, then we must pursue the advancement of human rights outside of the council.”Tovah Lazaroff contributed to this report.