By JPOST.COM STAFF
FEBRUARY 14, 2013 08:25
Demonstrators wave Iran's flag
(photo credit: REUTERS/Raheb Homavandi)
Advertisement
Iran is seeking a major expansion of its nuclear capacity, as is evidenced by an attempt to purchase 100,000 magnets used in centrifuge machines, according to report released Wednesday by Institute for Science and International Security (ISIS).“They are positioning themselves to make a lot of nuclear progress quickly,” the Washington Post quoted an unnamed European diplomat as saying following the publication of the ISIS report, “Each step forward makes the situation potentially more dangerous.”Purchase orders obtained by the Washington-based ISIS show Iran's attempt to purchase the highly specialized magnets from China in late 2011, in spite of a UN ban on export of these materials to Iran. "This large potential order by Iran in late 2011 for 100,000 ring magnets ready for use in IR-1 centrifuges implies an Iranian intention to greatly expand its number of these centrifuges," the report stated. The ISIS called on the international community to be vigilant of  Iranian companies attempting to evade sanctions, and urged the United Nations to take measures against the Jahan Tech Rooyan Pars company, as well as M. Tahmouresi, mentioned in the purchase order.The report was authored by David Albright, a former United Nations IAEA nuclear inspector, and current founder and head of the ISIS. 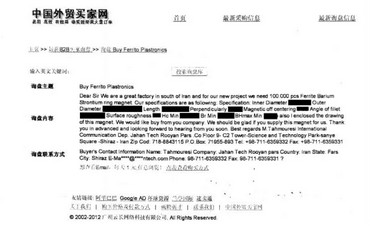 Purchase order
Click on the image to see a larger version of the purchase orderThe publication of the order came as Iran announced it had started installing a new generation of uranium enrichment machines at its Natanz nuclear site.The International Atomic Energy Agency has told its member states that Iran had announced plans to install and operate advanced uranium enrichment machines, in what would be a technological leap allowing it to significantly speed up activity that the West fears could be used to develop a nuclear weapon.Prime Minister Binyamin Netanyahu said Monday that Iran is shortening by one-third the time it will take to produce “one nuclear bomb’s worth of highly enriched uranium” by installing the newer centrifuges.

Click here for full Jpost coverage of the Iranian threat“I drew a line at the UN, they haven’t crossed that line, but what they are doing is shortening the time it will take them to cross that line,” he said.According to the Post, the specific dimensions in the order match those of the IR-1, a machine that spins at supersonic speeds to purify uranium gas into an enriched form that can be used in nuclear power plants - to a fraction.Meanwhile on Thursday, the UN nuclear watchdog said it had again failed to clinch a deal in talks with Iran this week on investigating the country's nuclear program.
Advertisement
Subscribe for our daily newsletter