By HERB KEINON, HILARY LEILA KRIEGER
Ahmadinejad nuclear unveiling 390
(photo credit: REUTERS)
Advertisement
US National Security Adviser Tom Donilon is scheduled to meet Prime Minister Binyamin Netanyahu in Jerusalem Sunday evening for talks on Iran, a day after the head of the US military said an Israeli attack now would not be “prudent.”This will be Donilon’s first visit here as US President Barack Obama’s national security adviser, having replaced James Jones in October 2010.Jones was the last national security adviser to visit Israel, doing so in January 2010 for talks that also centered on Iran.The White House issued a statement saying Donilon will be in Israel from Saturday to Monday for consultations with senior officials about a range of issues, including “Iran, Syria and other regional security issues.” The statement said Donilon’s visit was the “latest in a series of regular, high-level consultations between the United States and Israel, consistent with our strong bilateral partnership and part of our unshakeable commitment to Israel’s security.” 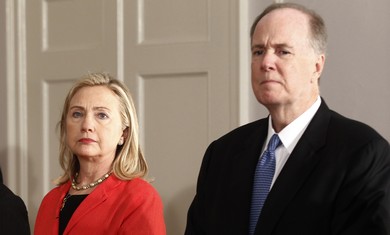 Israeli government officials did not provide any more details regarding the visit by the national security adviser, which, while not rare, is also not routine.Donilon is the latest in a parade of high-level visitors to both country’s capitals in recent weeks, including Foreign Minister Avigdor Liberman, Defense Minister Ehud Barak and Mossad head Tamir Pardo in Washington, and a visit here last month by the chairman of the US Joint Chiefs of Staff, Gen. Martin Dempsey.Dempsey, in a CNN interview to be broadcast on Sunday, said an Israeli attack on Iran would be “destabilizing.”“It’s not prudent at this point to decide to attack Iran,” he said, according to an emailed transcript. The US government is confident that Israelis “understand our concerns.“A strike at this time would be destabilizing and wouldn’t achieve their long-term objectives,” Dempsey said of the Israeli leadership. “I wouldn’t suggest, sitting here today, that we’ve persuaded them that our view is the correct view and that they are acting in an ill-advised fashion.”He said the economic sanctions imposed on Iran and international pressure are beginning to have an effect, without elaborating.“We are of the opinion that Iran is a rational actor,” Dempsey said. “We also know, or we believe we know, that the Iranian regime has not decided” to make a nuclear weapon, he said.

Click here for full Jpost coverage of the Iranian threat
Netanyahu, during a visit to Cyprus on Thursday, said that while he hoped the international sanctions work, “so far they have not.” The prime minister said that Iranian President Mahmoud Ahmadinejad’s high-profile “guided tour” last week of the country’s “centrifuge hall” was evidence that Tehran remained committed to continuing its nuclear program.Donilon’s visit follows Iran’s indication on Friday that it was willing to return to talks, after the world powers leading the negotiations received a formal letter from Tehran to do so.“We think this is an important step and we welcome the letter,” US Secretary of State Hillary Clinton said following a meeting with EU foreign policy chief Catherine Ashton.Clinton described the Iranian letter as appearing to accept that its nuclear program would be a subject of talks, whereas it has refused to broach the topic in earlier rounds of negotiations.Ashton, who appeared alongside Clinton at a US State Department press conference, also described the letter as having “no preconditions and a recognition of what we’ll be talking about,” but said that it must be possible to “sustain” new negotiations. Therefore, she said the world powers – the US, Britain, France, Germany, China and Russia – “need to set in train the process whereby we can be clear what it is we mean to achieve and what we’re expecting from the Iranians.”Both leaders said they were still evaluating the letter and formulating their formal response.Iran’s letter to Ashton, which was obtained by Reuters on Thursday, proposed resuming the stalled talks and said Tehran would have “new initiatives” to bring to the table.But the brief letter, which responded to a letter Ashton sent to her Iranian counterpart in October, offered no specific proposals, leaving a question mark over Tehran’s willingness to enter substantive negotiations on its nuclear work.State Department spokeswoman Victoria Nuland said Washington and its allies would be on guard against any more “false starts” to the negotiation process.“We’ve had negotiations that started and fizzled, or negotiations that ate up a lot of time and didn’t go where they needed to go,” Nuland said.“We want to make sure... if we go forward, and a decision has not been made, that it is well-planned, well-coordinated among us and that we’re absolutely clear as a unified group about our expectations.”French Foreign Minister Alain Juppé said on Thursday that a visit to Iran on Monday and Tuesday by top UN nuclear watchdog officials would help determine whether Tehran was serious about tackling international concerns.The UN team, led by the International Atomic Energy Agency’s chief inspector, will again try to extract Iranian explanations, after three years of stonewalling, for an IAEA investigation driven by intelligence reports that suggest Tehran has researched sophisticated ways to build atomic bombs.Following an IAEA report in November that cast new doubts over Iran’s nuclear work, the United States and the EU adopted sanctions meant to shut down Iran’s oil export industry, the world’s fifth-largest.The clampdown on Iranian oil is to take full effect in July, and to join an escalating range of UN and unilateral sanctions that Western officials say are putting unprecedented pressure on the Islamic Republic’s economy.Ashton said the world powers, known as the P5+1, made no headway in their last talks with Iran on the nuclear issue in Istanbul in January 2011.“The next question really is to look at, then, where we left off in Istanbul,” Ashton said, noting a series of suggested confidence-building measures such as greater scope for inspections.“We also said at that time they could come forward with their own ideas about what they wanted to do, so that this was a genuine, open process,” she said.Clinton, however, stressed that “we must be assured that, if we make a decision to go forward, we see a sustained effort by Iran to come to the table, to work until we have reached an outcome that has Iran coming back into compliance with their international obligations.”Reuters and Bloomberg contributed to this report.