The scooters were donated by Sheldon and Miriam Adelson through the Friends of the IDF Disabled Veterans Organization. 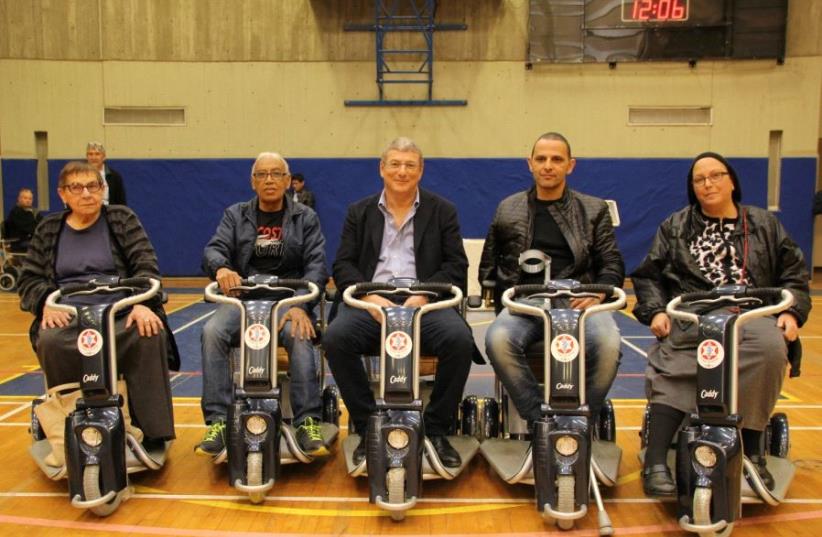 Disabled IDF veterans with their newly donated scooters
(photo credit: GOLSAR PRODUCTION HOUSE)
Advertisement
Some 160 mobility scooters were donated to disabled Israel Defense Forces veterans by philanthropists Sheldon and Miriam Adelson through the Friends of the IDF Disabled Veterans Organization.Uri Ehrenfeld, 63, was among those who received one of the devices. Ehrenfeld was taken captive on the eighth day of the Yom Kippur War after being severely wounded and held captive for two-and-a-half months.Ehrenfeld worked for the government for more than 20 years but had to retire following severe medical problems about 15 years ago.“Due to the fact that I was severely wounded, I need to walk with a cane or crutches,” he told The Jerusalem Post. “Without those I can hardly walk. I heard about the possibility to get the gift and it’s given me the freedom to walk, it’s given me the freedom to access places with my family that I couldn’t go before.”“It gives me the ability to be more free, to be more independent. It’s a great help, for all of us,” Ehrenfeld added.Nissim Ben Shabat, 53, who was wounded during the 1982 First Lebanon War in a building collapse in the city of Tyre, was another veteran who was grateful for the donations.“This scooter is my legs,” he said. “It will enable me, after many difficult years, to be mobile with ease over long distances. This is something that until today was almost impossible for me to do.”Another veteran to receive a scooter was former border policeman Ronny Goslan, 43, who lost both his legs when he threw himself on a suicide bomber in Jerusalem in 2002.“Finally, we can go for a walk in the park with our grandchildren,” said the wife of one disabled veteran who was wounded in the Yom Kippur War. “We’ll surprise them this Saturday.”The youngest veteran to receive a scooter was 38 and the eldest was 90.The scooters were donated by the Adelsons after they visited the Beit Halochem Rehabilitation Center in Tel Aviv Beit six months ago.Elyezer Shkedy, a former major-general who heads the IDF Disabled Veterans Organization, called the Adelsons “true friends of the wounded soldiers” and emphasized that their contribution will greatly improve veterans’ daily lives.The Friends of IDF Disabled Veterans Organization works in cooperation with the Zahal Disabled Veterans Organization, providing for the needs of more than 51,000 disabled veterans during their rehabilitation.