About 30,000 travelers brought campgrounds to full occupancy at the various INPA sites around the country, the authority said. 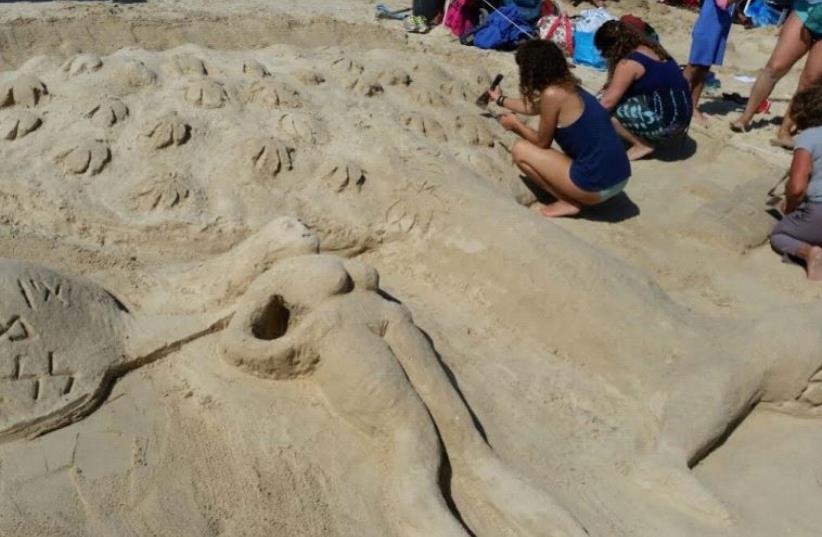 Beit yannay sand sculpting contest, held for the 20th year
(photo credit: AMIT LEVKOV/ISRAEL NATURE AND PARKS AUTHORITY)
Advertisement
From Succot through Simhat Torah, nearly 2 million people headed to the country’s national parks, nature reserves and forests to picnic and hike outdoors during the holiday week.The Israel Nature and Parks Authority reported more than a million visitors to its parks and nature reserves, while Keren Kayemeth LeIsrael- Jewish National Fund said that about 850,000 people came to the organization’s parks and forests – all in all a slight decrease from last year’s numbers. Although happy to find Israelis enjoying nature during their time off from work, parks officials lamented that all too often, the travelers left their fun behind them, in the form of garbage on the nation’s land.“We were pleased to see so many hikers walking on trails, enjoying the springs, crawling through caves, climbing in crevices and watching migrating birds or blossoming crocuses throughout the country, while meticulously following correct hiking rules,” said Raya Shurki, INPA’s community director.“Unfortunately, we are still experiencing symptoms of waste left behind on the ground, despite the distribution of bags for visitors and extensive explanations on the subject,” she continued.“INPA workers removed thousands of trash bags from rivers and parking lots. We are grateful to the many Israeli households who chose to hike on this holiday in the reserves and parks and enjoyed the landscape and heritage of our country.”Among the most popularly visited INPA attractions were Caesarea National Park, the Eilat Coral Beach Nature Reserve, Yarkon-Tel Afek National Park, Beit Guvrin National Park, Ein Gedi Nature Reserve, Herodion National Park, Nahal Prat Nature Reserve, Zippori National Park and Beit She’an National Park – the last of which housed special evening activities.Due to the pleasantly warm weather throughout the week, the INPA’s water parks and reserves also received many travelers at its water sites, such as the Majrasa Nature Reserve, Hurshat Tal National Park, Nahal Kziv Nature Reserve, the Banyas Nature Reserve, Tel Dan Nature Reserve and Einot Tzukim Nature Reserve.The INPA reported heavy traffic at its national parks along the coastline, particularly at Beit Yannai National Park (Nahal Alexander), Ashkelon National Park, Achziv National Park and Palmahim National Park – many of which hosted activities for the whole family, like the sand sculpting events at Palmahim and Beit Yannai.About 30,000 travelers brought campgrounds to full occupancy at the various INPA sites around the country, the authority said.Rescue, monitoring and enforcement personnel were also on high alert in the parks throughout the holiday week, with about 20 flights observing hikers as they enjoyed the orders, according to the INPA. After catching three hunters who were in possession of a deer, inspectors confiscated their weapons and opened an investigation against them.Officials also opened an investigation against suspects caught spray-painting their names on the walls of the fortress at Migdal Tzedek, and cited 20 people for driving on the country’s beaches.Over the course of the holiday, the INPA deployed rescue units to help treat and extract travelers from various places, including an injured girl and her father at Nahal Arugot, the authority added.In cooperation with firefighting crews, INPA workers also helped handle a number of fires that broke out throughout the country.KKL-JNF’s 850,000 visitors likewise headed to a wide array of destinations throughout the country, with cycling trails and forests particularly popular.Each morning, tens of thousands of cyclists headed out to the wooded trails, including the trails in Beit Keshet Forest, Zippori Forest, Switzerland Forest, Ben Shemen Forest, Independence Park, Bar Bahar in the Jerusalem mountains, Shikma, Lahav Forest and Beeri Forest.Hundreds of thousands of families picnicked at KKL-JNF parks and forests, while about 42,000 visited Hula Lake in the North – a lake that is currently hosting about 20,000 migrating cranes, the organization said. Olive harvesting activities also proved popular throughout the intermediate days of the holiday.Among KKL-JNF’s most popular sites were Biriya Forest, Keren Hacarmel Forest, Adamit Park, Beit Keshet Forest, Ilanot Forest, Eshtaol Forest, British Park, Canada Park, Ben-Shemen Forest, the Jerusalem forests, Yatir Forest, Lahav Park, Yeroham Park, Ben-Gurion Park in Dimona, Golda Park and Hamalachim-Shahariya Forest.While INPA officials said that garbage was left behind at many of their sites, KKLJNF foresters reported that most of their woods and parks were left clean.