300,000 good deeds contribute to dedication of Torah in Jerusalem school

The new Torah scroll was written within the framework of Jerusalem50, a unique project initiated conjunctively by the Afikim Foundation and Orot. 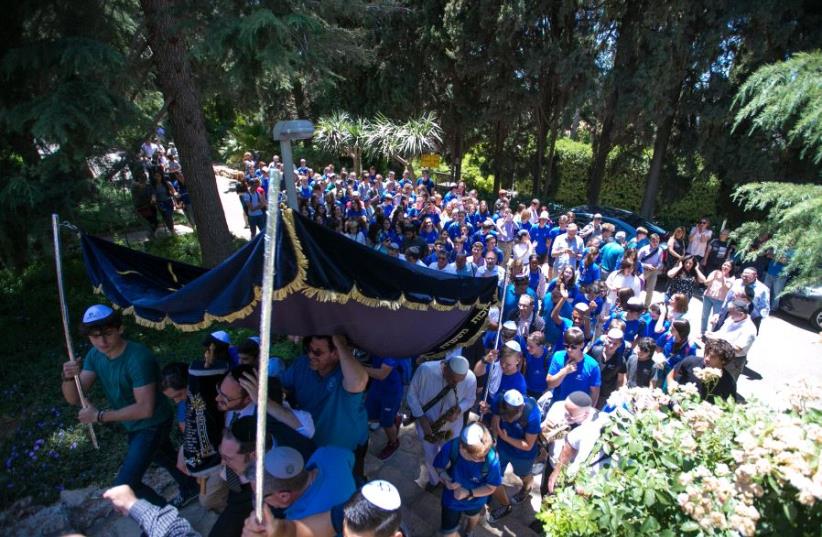 The Israel Goldstein Youth Village (Havat Ha'Noar Ha’Tzioni) celebrating the inauguration of a Torah scroll written thanks to over 300,000 good deeds of Jews from Israel and abroad
(photo credit: YECHEZKEL ITKIN)
Advertisement
The Israel Goldstein Youth Village (Havat Ha'Noar Ha’Tzioni) celebrated this week the inauguration of a Torah scroll written thanks to over 300,000 good deeds of Jews from Israel and abroad, and was dedicated in honor of the 50th Anniversary of Jerusalem's reunification. The idea behind the initiative was for anyone who performed a good deed to report it on a website designated especially for this purpose and for every good deed reported, a letter was added to the Torah scroll.The Youth Village was founded by the Israeli Progressive Party which was active from the 1950s until the late 1980s, with platforms promoting freedom of religion, pluralism, and a liberal economic agenda. Initially, the Youth Village was established as a school for new immigrants, and even today many young immigrants from France, Ukraine, Australia, the USA and study at the school, rated as one of the top secular schools in Jerusalem.The inauguration of the Torah scroll was attended by hundreds of male and female students who inscribed the last letters of the scroll. Former Chief Rabbi of Israel and current Chief Rabbi of Jerusalem Shlomo Amar attended the ceremony and addressed the audience, relating a lesson from the Talmud about the importance of dedicating a Torah scroll“It is an honor for this school that we are all here together completing this unique Torah scroll, written entirely through good deeds,” said Amar. “The message for everyone here is to increase your Torah study and charitable endeavors.” The new Torah scroll was written within the framework of Jerusalem50, a unique project initiated conjunctively by the Afikim Foundation and Orot, two organizations that actively endorse Jewish education in Israel and the Jewish world. Both organizations are directed by Haredi rabbis; Rabbi Raphael Butler manages Afikim, and Rabbi Yehuda Polishuk directs Orot. The decision to complete the writing of the Torah and mark the celebration in honor of 50 years of a unified Jerusalem is a unique phenomenon in the Haredi world as well.Since the entire Torah scroll was written through good deeds, Rabbis Butler and Polishuk determined that it would be most appropriate to culminate the project and dedicate the scroll in a manner that would likewise promote charity and generosity. The Hachnassat Sefer Torah therefore ended at the offices of Zaka, an organization that assists bereaved families, and the plan is to lend this Torah scroll to houses of mourning as needed.Rabbi Yehuda Polishuk remarked that "The Torah belongs to all parts of the Jewish nation and cannot be seen as belonging to one group or another. It is our mission to make the Torah accessible to all parts of the Jewish people and to intensify the feeling that the Torah is, indeed, relevant to all the Jewish people, a sentiment that, unfortunately, has been somewhat lost over the past years.”Deputy Executive Director of Israel Goldstein Youth Village Mr. Danny Haim lauded the diversity of the school. “You can find today in the audience people with a black kippah, a knitted Dati Leumi one, a white kippah or bare head. Speaking about our Jewish identity draws from our sincere respect toward everyone. Here, there is mutual respect that enables both differences and sharing.”