According to the Embassy of India in Tel Aviv, Israel is home to approximately 85,000 Jews of Indian-origin, the majority of whom made Israel their home in the 1950s and 1960s. 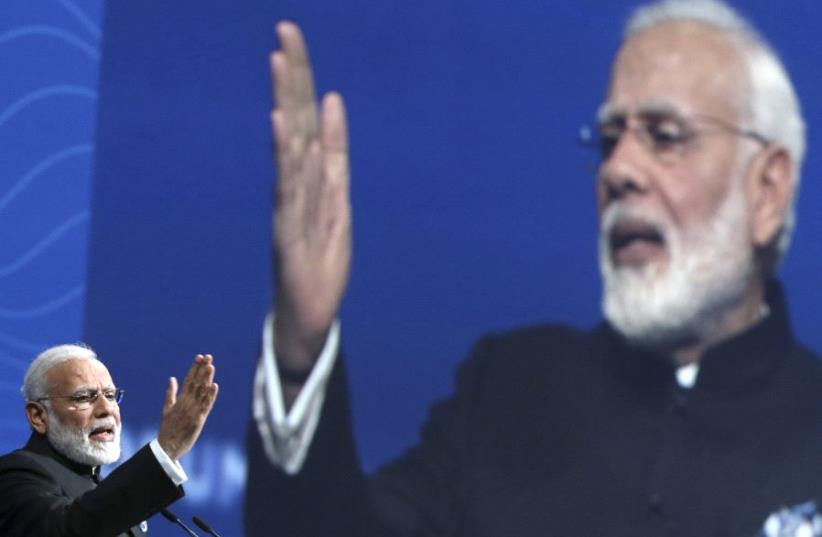 Indian Prime Minister Narendra Modi delivers a speech during a session of the St. Petersburg International Economic Forum (SPIEF), Russia, June 2, 2017.
(photo credit: REUTERS/VALERY SHARIFULIN/TASS/HOST PHOTO AGENCY/POOL)
Advertisement
Approximately 4,000 Jews of Indian origin, now residing in Israel, are expected to attend a keynote event hosted by Indian Prime Minister Narendra Modi during his three-day visit to the Jewish state in July.According to Indian newspaper The Economic Times, preparations for the large community event, due to take place on July 5 in Tel Aviv, are in their final stages. Organizers are hopeful that Israeli Prime Minister Benjamin Netanyahu will attend. “We expect a crowd of around 4,000 Indian Jews, who migrated to Israel, to attend the program,” India's foreign policy department head Vijay Chauthaiwale told the newspaper.The event at Tel Aviv's Convention Center is similar to Modi addresses during previous foreign visits, aimed at local residents of Indian origin. In a November 2015 visit to the United Kingdom, Modi appeared before an impressive audience of 60,000 at London's Wembley Stadium. Similarly large gatherings have been held in the US and South Africa. According to the Embassy of India in Tel Aviv, Israel is home to approximately 85,000 Jews of Indian-origin, the majority of whom made Israel their home in the 1950s and 1960s. A further 10,000 Indian citizens, primarily caregivers, work in Israel. Modi's historic, greatly anticipated visit to Israel will be the first ever by an Indian prime minister. Since Modi’s election in 2014, there have been considerable efforts to raise the profile of Israel-India ties.His visit, which significantly will not include a trip to the West Bank and Gaza Strip, follows the visit to Israel last January by Indian Foreign Minister Shushma Swaraj.On Monday, the head of the India’s navy, Admiral Sunil Lanba, arrived in Israel for four days of talks aimed at boosting bilateral military cooperation.In April, Israel Aerospace Industries was awarded a $2 billion Indian military hardware deal, considered to be “the largest defense contract in Israel’s defense industries’ history.”The following month, Israel Aerospace Industries signed a $630 million deal with the Indian state-owned aerospace and defense company Bharat Electronics Limited to provide India with the naval version of the aerial defense system Barak 8.Modi is expected to sign additional deals during his visit. Anna Ahronheim contributed to this article.