Poll: Ahead of Independence Day, 84% are proud to be Israeli

Independence Day poll finds Israelis love their falafel, aren’t very happy with politicians and would like to share a beer with Shimon Peres. 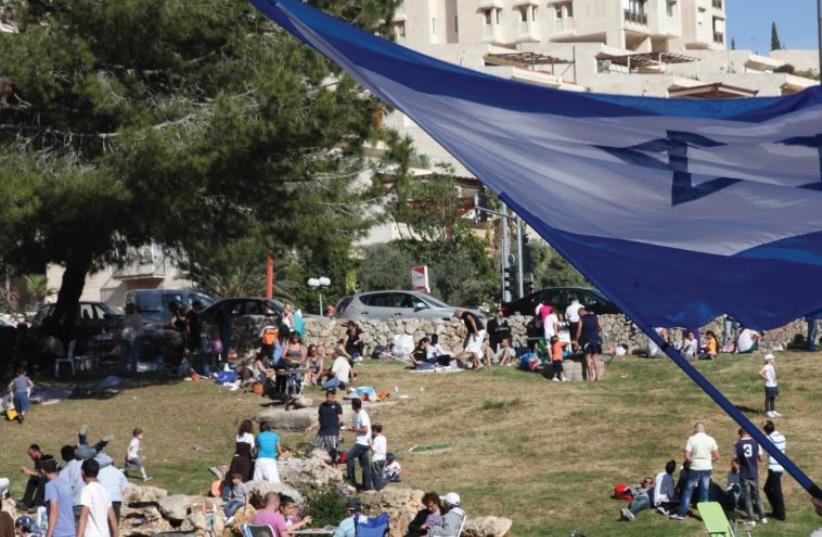 Israelis enjoy an Independence Day barbecue in Jerusalem’s Gan Sacher last year
(photo credit: MARC ISRAEL SELLEM)
Advertisement
Israelis are happy with life in Israel and most would not consider leaving, a poll conducted by Panels Politics for The Jerusalem Post found Tuesday.Asked if they’re proud to be Israeli, 84 percent of the 501 adults polled responded “Yes” in varying degrees.Over three-quarters (76%) of respondents said Israel is a good place to live. Asked how satisfied they were with life in Israel on a scale of one to 10, 10 being the most satisfied, the average response was seven.The majority of Israelis – 69% – said they would not consider emigrating, while 28% would, and 3% did not know. Of those considering leaving, most (63%) said it was because of their economic status. The secondmost common reason was “the danger to democracy,” with 10%.The things that keep Israelis in Israel are family (39%), followed by history (21%) and the Bible (21%). Among haredim, 74% cited the Bible as their reason, whereas most secular Israelis (58%) said family.The poll also found that Israelis feel secure the country will continue to exist, with 73% saying Israel is an “existing fact,” compared to 21% who thought “Israel’s existence is in real danger.”At the same time, 63% were concerned to some degree that there will be a war in the short term, and 54% were pessimistic that Israel’s security situation would improve in the next decade.Despite the concern over a future war, a plurality of Israelis polled (27%) felt that the country’s most urgent problem is the cost of living and economic gaps. Only 18% were most concerned by the Palestinian wave of terrorism, followed by 15% who said the biggest problem is external security threats such as Hamas and Hezbollah.Most Israelis (64%) were not concerned about diplomatic isolation or boycotts.Politicians did not do very well in their voters’ eyes, with Prime Minister Benjamin Netanyahu scoring 4.7, and ministers and MKs in general scoring 4.4 on a scale of one to 10, with one being terrible and 10 being excellent. National-religious people and haredim gave Netanyahu the highest scores, of 6 and 6.1, respectively, whereas secular people ranked Netanyahu at 3.6.Perhaps that is why, when asked which politician they would most like to join for lunch or a beer, the most popular answer was someone no longer in office, former president Shimon Peres, at 12%. Netanyahu was tied with Yesh Atid chairman Yair Lapid for second place, with 10%, and Education Minister Naftali Bennett came in third, with 8%.Among the Israeli politicians and public figures who attracted the fewest number of votes were ministers Yuval Steinitz, Yariv Levin, Ze’ev Elkin, Ofir Akunis, and Uri Ariel.Just one percent of respondents said they’d like to have lunch with Joint List MK Ahmad Tibi, while Defense Minister Moshe Ya’alon doesn’t fare much better – two percent said they’d like to dine with him.The low opinion of politicians may also explain why corruption is the thing that annoys Israelis most about life in the Jewish state, getting 23% of the vote. Next on the list is lack of mutual respect (20%) and economic gaps (14%).What Israelis like most about their fellow Israelis is their mutual responsibility (44%) followed by being “sahbak,” a slang term meaning casual friendliness (18%), and gracious hosts (13%).The most Israeli foods are, unsurprisingly, falafel (54%) and hummus (18%).The poll was conducted online on Sunday, among 501 Israelis making up a representative sample of Israelis over age 18, with a margin of error of 4.3%.Of the respondents, 56% defined themselves as right wing, 28% as centrist, and 16% as left-wing. Jews made up 85% and Arabs 15% of the respondents.Of Jewish Israelis polled, 19% said they’re totally secular, 34% secular with a connection to traditions, 22% traditional, 14% religious and 11% haredi.