A day defined by unity

June 3, 2015, was the first Global Unity Day and its popularity exceeded even the most optimistic expectations. 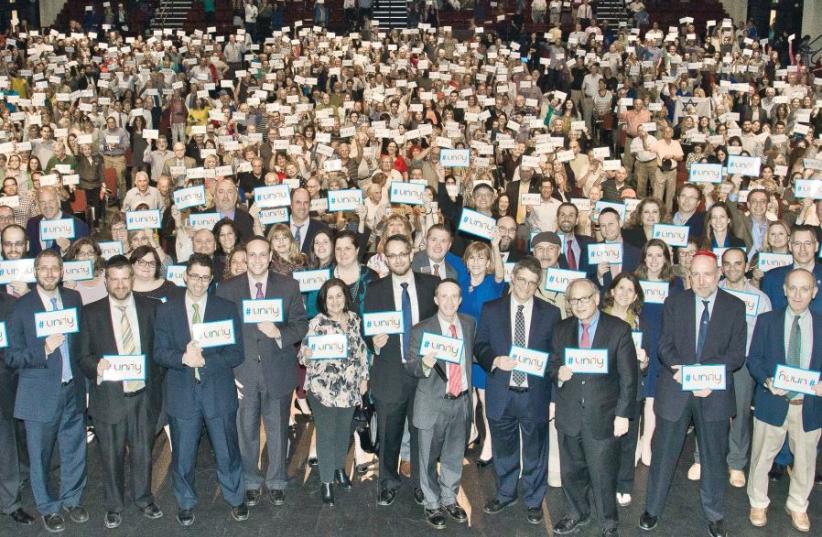 The Jerusalem Unity Prize
(photo credit: JEFFREY THOLL)
Advertisement
What began as a modest idea to offer tribute to the memories of three boys – Gil-Ad, Eyal and Naftali – has since grown into an international phenomenon attracting the participation of millions of people and dozens of communities across the globe.It all began during the shiva period in the summer of 2014 when Jerusalem Mayor Nir Barkat visited the Fraenkel, Shaer and Yifrach families, whose sons had been kidnapped and murdered. He briefly spoke of an initial idea to name an award in their memories and salute the remarkable spirit of global Jewish unity that defined the 18 days when the boys’ fates remained unknown.While the idea was presented to each family separately, all three families soon agreed that this would be an appropriate tribute and the Jerusalem Unity Prize was born. The mayor partnered with Gesher, the organization working to bridge gaps within Israeli society, and soon after it was announced, nominees poured in from all over the world.It was quickly recognized that there was a communal thirst for such an idea – that Jewish unity is an ideal that is spoken of mainly when it is missing, but too rarely celebrated when it succeeds.The organizers of the prize, led by the parents of the three boys, decided that the day when the prize was awarded deserved to be far more than just a local ceremony, but rather demanded a far larger and more ambitious approach to educate on the power of communal unity.With that vision, Unity Day was born.The plan was developed for an annual day, on or close to the memorial anniversary of the three boys, when communities across Israel and around the globe would come together to find that common ground. It would be a day when we would be willing to honestly confront the differences within our greater community while asking the tough yet necessary questions of how to overcome those divides.June 3, 2015, was the first Global Unity Day and its popularity exceeded even the most optimistic expectations.Hundreds of thousands of students from around the world participated.Programs ranged in size from largescale gatherings in community centers and synagogues to casual conversations on street corners and parks, where people of different backgrounds welcomed the chance to get to know each other. Reports began to trickle in from Jewish communities all over the map. Israel was clearly the epicenter of the day, with hundreds of thousands participating through the Education Ministry and partnerships with the IDF and the local councils.But communities as far away as Finland, Hong Kong and even Jamaica participated with no less passion.No limits were put on how to commemorate the day. Only a vision to reach out to others and promote a lessdivided world.The result were products like “Unity Soup” where peoples of different backgrounds brought different ingredients to create a new item on the menu. A viral effort around Unity Day reinvigorated the “Hug a Jew” campaign with people all over the world posting videos and photos.In 2016, Unity Day programs gained even greater popularity while embracing new approaches. Together with the UJA Federation of New York, a leading sponsor of the Jerusalem Unity Prize and Unity Day, special Shabbat events were held in Riverdale and White Plains, New York with the participation of Avi and Rachelle Fraenkel, parents of Naftali.In what was described as the first program of its kind, Reform, Orthodox and Conservative communities came together in the local Reform synagogue.Even while each denomination had its own prayer service, a communal meal highlighted the theme that there is far more that unites than divides. Speaking before an audience of hundreds at the event in White Plains, Rachelle conveyed a message that she has shared countless times before and after.She stressed that she doesn’t need the world to remember Naftali. That would be the job of his family and friends.What she does want is for the world to remember how the global community behaved during those 18 days of uncertainty and to always remember the power we have as a people when we choose unity over division.Unity Day 2017 programs are now being finalized for communities across Israel and around the world. To find out more visit www.unityprize.org. To further the goals of Unity Day and allow it to reach a broader audience, a crowdfunding campaign has recently been launched inviting the support of those who share the vision of the families and the founders of the prize.

Visit www.causematch.com/en/projects/ unityday/ to find out more
Advertisement
Subscribe for our daily newsletter