From Obama to Trump, a change in tone and substance

Trump’s refraining from clearly saying that two states is the only way, while endorsing a wider regional approach, is a significant reset of the entire diplomatic process with the Palestinians. 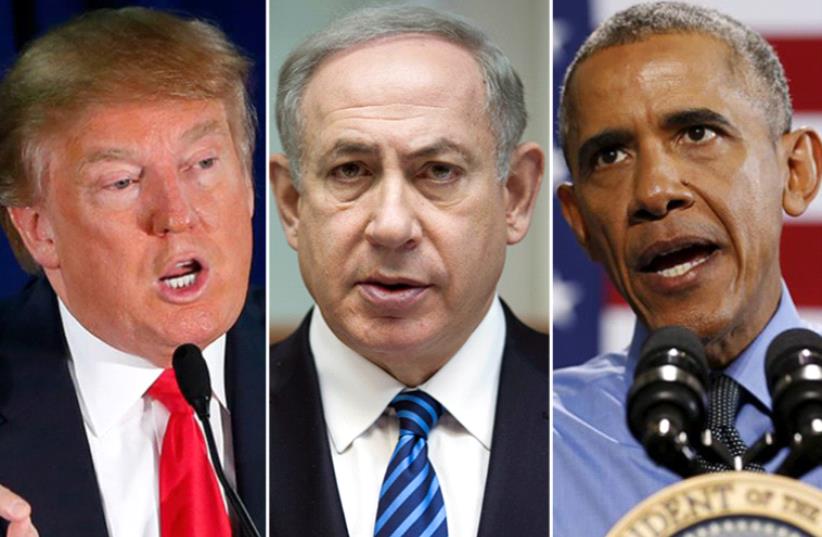 Trump, Netanyahu and Obama
(photo credit: REUTERS)
Advertisement
Eight years ago, when Prime Minister Benjamin Netanyahu met then-president Barack Obama in the Oval Office, this is what the new president had to say about the settlements: “Now Israel is going to have to take some difficult steps as well, and I shared with the prime minister the fact that, under the road map and under Annapolis, that there’s a clear understanding that we have to make progress on settlements. Settlements have to be stopped in order for us to move forward. That’s a difficult issue. I recognize that, but it’s an important one and it has to be addressed.”And here is how new President Donald Trump addressed the very same issue before his first meeting with Netanyahu in the Oval Office: “As far as settlements, I’d like to see you hold back on settlements for a little bit, we’ll work something out. I would like to see a deal being made, I think a deal will be made.”The message wasn’t that significantly different, but there was a great difference in how it was delivered.And that is one of the three major takeaways from the Trump-Netanyahu press conference on Wednesday in the White House: There will be differences between the two men because they are leaders of different countries, whose interests do not always intersect, but the differences will be dealt with very differently – as among friends, not rivals.Obama’s tone, his demeanor at his first meeting, was almost that of a teacher telling a pupil what he has to do. Trump’s tone was friendlier, lighter.
Trump on the two state solution for Israel and Palestinians during meet with Trump , Feb. 15, 2017 (credit: REUTERS)
“Bibi and I have known each other a long time,” Trump said. “A smart man, a great negotiator, and I think we are going to make a deal. It might be a bigger and better deal than people in this room even understand.”When Netanyahu responded with a curt “All right,” Trump joked that “doesn’t sound too optimistic,” and Netanyahu shot back in reference to a book Trump once wrote, “That’s the art of the deal.”That jocular tone was significantly different from the heavy, tense tone of most of the Obama-Netanyahu meetings, even their first. Tone cannot paper over differences, but a good tone can make those differences easier to deal with.The second major takeaway from the press conference was one of substance: Trump’s refusal to unequivocally endorse the two-state solution, US policy since president George W. Bush announced support for a Palestinian state in 2002.“So I’m looking at two states and one state, and I like the one that both parties like,” Trump said, as Netanyahu laughed.“I’m very happy with the one that both parties like. I can live with either one. I thought for a while that the two states looked like the easier of the two, but honestly, if Israel and the Palestinians are happy, I’m happy with the one they like the best.”That is a significant shift from what has become axiomatic, that the only solution is a two-state solution. Trump is essentially saying that he is open to entertaining ideas and approaches to the diplomatic process other than the ones that have been tried – and have failed – since the Oslo process began in 1993.The third major takeaway is this administration’s endorsement of looking at a wider regional diplomatic process, as Netanyahu has been advocating for a number of years.According to this idea, the sands in the Middle East have shifted fundamentally, and it will now be easier for Israel to reach understandings with the pragmatic Sunni states in the region – Egypt, Jordan, the Saudis and the United Arab Emirates. Once those understandings are reached, those countries will then nudge the Palestinians to be more flexible, which will make an Israeli-Palestinian deal more likely.Former US secretary of state John Kerry dismissed this out of hand as unrealistic, saying the Arabs would never go for it. Not Trump; he wants to give the ideal a whirl.“It is actually a much bigger deal. A much more important deal, in a sense; it would take in many, many countries, and cover a very large territory,” he said. “I think we have some pretty good cooperation from people who in the past would never, ever have thought about doing this.”Much has been written in the last few days about how this first Trump-Netanyahu meeting – and the new, friendlier tone between the two leaders – will reset Israel-US relations after the rocky Obama years.But more than a reset of Israel-US ties, Trump’s refraining from clearly saying that two states is the only way, while endorsing a wider regional approach, is a significant reset of the entire diplomatic process with the Palestinians.