Just over a week in office, Trump has already significantly altered the tone toward Israel. 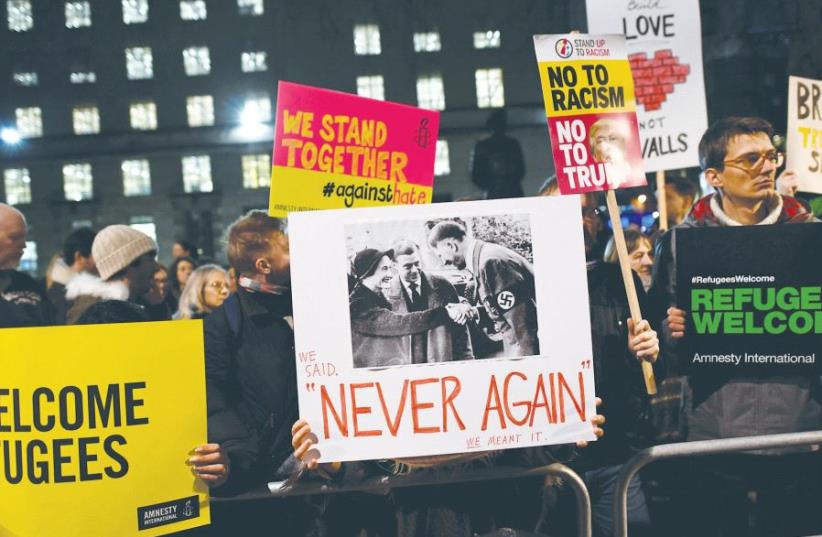 DEMONSTRATORS IN LONDON hold a protest rally yesterday against US President Donald Trump’s executive order banning refugees from seven Muslim countries from entering the US
(photo credit: REUTERS)
Advertisement
On June 5, 2009, then US president Barack Obama paid a visit to Buchenwald. There, the new president spoke briefly but eloquently about the Holocaust, the pernicious nature of Holocaust denial and the resilience of the Jewish people. He was accompanied by Elie Wiesel.Among US Jews, that visit was a powerful and poignant moment: the new president, whom most of them supported, speaking as only he could about the Holocaust.It made less of an impact on Israeli Jews.In Israel, many were stinging over what was perceived as a snub by the US president. Because the day before he went to Buchenwald, Obama stood at Cairo University and delivered his landmark address to the Arab world.That speech, though it did contain some favorable elements toward Israel, rubbed many Israelis the wrong way. One of the reasons was because he failed to mention any Jewish historical attachment to Israel, framing the Jews’ return to the country solely within the context of the Holocaust and tragic Jewish history, and appearing to argue that the legitimacy of the Jewish state stemmed from the Holocaust.This unfortunate “framing” could have been overlooked by those Israelis who wanted to judge the new president charitably, but he compounded that misstep by another – he didn’t make a brief stopover in Israel.Obama, who just two months earlier had visited Turkey, and who was just a brief flight away from Tel Aviv, couldn’t be bothered to stop over for a quick visit. But, his supporters would defend him saying, he did go to Buchenwald on the way back home.And therein lies the rub.The trip to Buchenwald made a big impression on many American Jews, a community for whom the Holocaust is a critical ingredient of their religious identity. But it made much less of an impact on Israeli Jews, whose identity is also tied up with the Holocaust, but for whom their judgment of whether a president is good or bad for them is not centered on whether he acknowledges the Holocaust properly or has a Passover seder in the White House, but rather how he treats Israel.Following his Cairo speech and trip to Buchenwald, Obama’s polling numbers in Israel reached an all time low, with only four percent of Israeli Jews at the time saying he was pro-Israeli.The early period of Obama’s tenure, as illustrated by the above, could be summed up as follows: strong on Holocaust remembrance, weak on Israel. For US President Donald Trump, the early days of his presidency can be characterized as the opposite: weak on Holocaust remembrance, strong on Israel.First regarding being strong on Israel.Just over a week in office, Trump has already significantly altered the tone toward Israel. Gone are the days when every new announcement of building over the Green Line would elicit a strong reprimand from Washington.Last week Israel announced plans to build some 550 new housing units beyond the Green Line in Jerusalem, and another 2,500 in the settlements. The White House did not blink, or condemn Jerusalem for placing obstacles in front of a two-state solution. That is a significant change of tone from what came before.After weeks and even months of anxiety in Jerusalem over whether the US would allow a resolution to pass the UN Security Council that would lay down parameters of a two-state solution that would likely answer Palestinian needs, but not Israeli ones, that particular anxiety has disappeared. That is also a significant change of tone.Granted, Trump has not moved on his campaign promise to transfer the US Embassy to Jerusalem, but the very fact that this matter is seriously under consideration is a marked change from any of his predecessors.That, too, is a significant change of tone.That is the “strong on Israel” part of the equation.The weak on Holocaust remembrance part was glaringly evident in the White House statement issued Friday on International Holocaust Remembrance Day, that omitted any mention of Jews or antisemitism.“It is with a heavy heart and sombre mind that we remember and honor the victims, survivors, heroes of the Holocaust,” the statement read. “It is impossible to fully fathom the depravity and horror inflicted on innocent people by Nazi terror. Yet, we know that in the darkest hours of humanity, light shines the brightest. As we remember those who died, we are deeply grateful to those who risked their lives to save the innocent.”That universalization of the Holocaust is as jarring to the ear as was Obama’s comment in Cairo that Israel’s legitimacy flowed from the Holocaust. But just as Obama’s words did not make him an antisemite, as some at the time – and afterward – have unfairly claimed, nor does Trump’s omission of the Jews in a statement on the Holocaust make him one, or a Holocaust denier, as some are now charging.Indeed, we have traveled down this exact same route with a new leader very recently. Last year, on the same International Holocaust Remembrance Day, Justin Trudeau, who just two months earlier took the world by storm and won Canada’s prime ministerial election, issued a statement to mark the day that also oddly forgot the Jews.“The Holocaust is a stark reminder of the dangers and risks of allowing hate, prejudice, and discrimination to spread unchallenged. It also reminds us that silence must never be an option when humanity is threatened,” that statement read. It too was highly criticized for its strange omission.This year’s statement by Trudeau, by contrast, made mention of the Jews. “Today, on the 72nd anniversary of the liberation of Auschwitz-Birkenau, we remember the more than six million Jews murdered during the Holocaust and the countless other victims of Nazi brutality,” it stated.Trudeau learned. Trump might do so as well.