Israeli-Arab leaders met with President Reuven Rivlin during Ramadan to discuss crime and violence within their own communities. 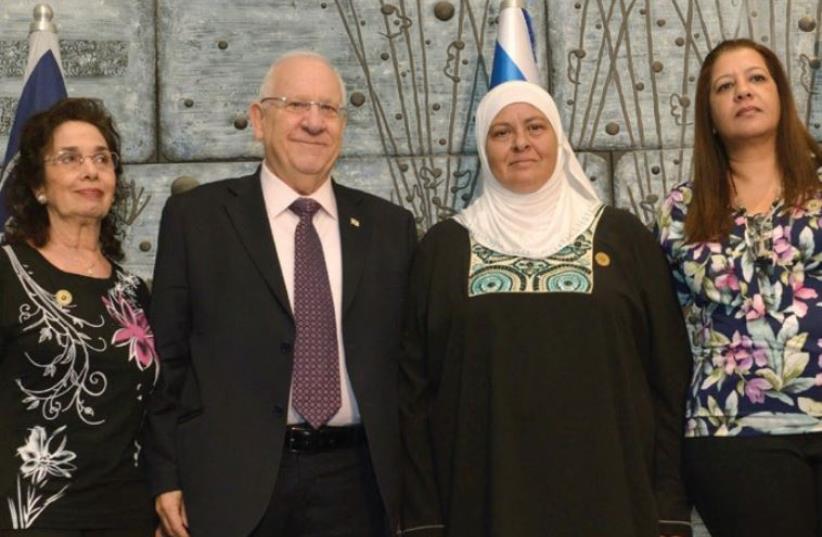 President Reuven Rivlin stands with family members of organ donors at an ADI - National Organ Transplant Center ceremony, May, 2015
(photo credit: MARK NAYMAN)
Advertisement
Escalating violence in Arab towns and villages will erupt like a plague throughout the country, Arab leaders warned on Monday night at the Iftar dinner hosted at the President’s Residence by President Reuven Rivlin.Kadi Iyad Zahalka – head of the High Sharia Court in Jerusalem – and Arara Council head Mudar Yunis, who chairs the Forum of Local Arab Authorities, each spoke of the acute need to curb the violence that is making innocent Arab citizens fearful for their safety.The annual Iftar gathering at the President’s Residence symbolizes equality, dignity, security and the rule of law, said Zahalka, “but this is not the reality.”There is so much violence and crime that Arab citizens do not feel safe, and feel that they can easily fall victim, he stated.“Arab society is bleeding, and the innocent are screaming ‘save us,’” he declared.Even though Zahalka acknowledged that there are now many more Arabs in the police force, he lamented that, “crime and violence continue unchecked.”Citing the deaths in the past year of 22 Arab men and six Arab women that were killed by Arabs, Zahalka called for the establishment of an interministerial committee, headed by a representative from the Prime Minister’s Office, in order to establish an emergency program geared toward the elimination of violence.Such a committee should also determine provisions to be made for widows, children, injured persons and people suffering from the traumatic effects of violence, he insisted.Arabs are not criminals by nature, commented Yunis, who pointed to circumstances that made some of them engage in criminal activity. For instance, those who built homes without first acquiring a permit had their homes taken down by the authorities. What they did was illegal, he said, but he implied that the unlicensed construction was because Arabs are so frequently denied a permit when they apply.An Arab doctor under threat buys a gun for his own safety, but Arabs are not supposed to have guns. This makes him a criminal, Yunis explained, adding that mayors who want to make plans for the communities that they lead always have to take into account that their plans will be thwarted by criminal elements.“Only the government can bring about change, because we don’t have the resources,” he stressed.He admitted that the police were trying to improve the situation, “but they’re not doing what they should be doing.”Rivlin said there had been no need this year to remind him of Ramadan, because he was constantly witness to cooperation and coexistence among the Jewish and Arab physicians and nurses who were caring for his wife Nechama, who is recuperating from a lung transplant at the Rabin Medical Center-Beilinson campus.Things here happen so quickly, said Rivlin, that it was easy to forget how recently elections had taken place. He and others whose loved ones were the recipients of the most professional nursing care during Ramadan – when Muslim physicians and nurses were fasting – were extremely appreciative of their devotion to duty, he said.Relating to the elections, the president lashed out against those who had sought to delegitimize the Arab parties, adding that he was also concerned about the low voting ratio in the Arab community. “Not voting is a privilege that we cannot afford to give ourselves,” he said, and cautioned that this should be remembered in the event of another election in the near future.He also declared that any form of discrimination against Arabs is a danger to democracy.Eliminating crime, violence and discrimination was a national mission to be equally shared by all citizens, he said, emphasizing the “all.”The president added that he was aware of how much law-abiding Arabs are hurt by violence, crime and discrimination.“We want to live together, but first we want to live,” said Rivlin.