Australians, New Zealanders, and Israelis commemorate the Battle of Beersheba

Former enemies who are now friends joined together on Friday in paying tribute to courageous soldiers who fought and fell. 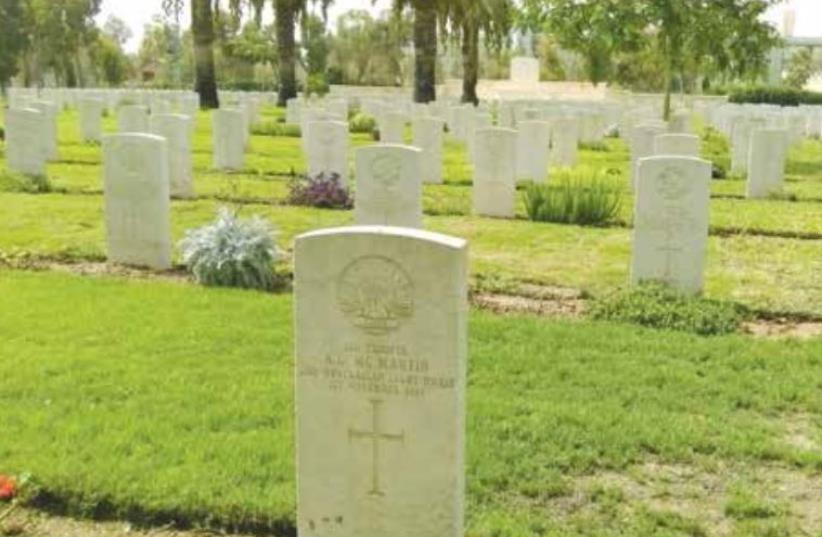 THE COMMONWEALTH WAR CEMETERY in Beersheba contains 1,241 graves of commonwealth soldiers killed in the First World War, 67 of them unidentified
(photo credit: EITAN BEN NUN)
Advertisement
Former enemies who are now friends joined together on Friday in paying tribute to courageous soldiers who fought and fell in the Battle of Beersheba and in other campaigns during the First World War.In a series of ceremonies organized by the Australian and Turkish embassies in conjunction with the municipality of Beersheba, the heroism of Australian, New Zealand, Turkish, and German soldiers who paid the supreme sacrifice in this and other campaigns was saluted by Australian Ambassador Dave Sharma, New Zealand Ambassador Jonathan Curr, Turkish Charge d’Affaires Cem Utkan, Beersheba Mayor Ruvik Danilovich, and Beersheba Deputy Mayor Heftsi Zohar.Australian and New Zealand expats, representatives of Australian Zionist Youth groups from all over the country, diplomats, military attaches, and two Australian delegations currently in Israel were amongst those present.Both Sharma and Curr gave brief descriptions of the battle, with Curr focusing more on the capture of Tel el-Saba, which was an important vantage point, and Sharma on the actual Battle for Beersheba and the saving of its wells from destruction by Ottoman forces.“The Light Horse men took less than an hour to overrun the trenches and enter Beersheba,” said Sharma, adding that some 750 Turkish and German soldiers were taken prisoner.The Turkish stronghold of Gaza fell a week later, he said, and allied troops then went on to capture Jerusalem, Jericho, Damascus, and Aleppo.In October 1917, explained Sharma, the outcome of the First World War still hung in the balance. “We tend to forget this now, and blessed with hindsight imagine an Allied victory to be preordained. In fact, in October 1917, it looked anything but. At that time the Ottoman Empire, the Austro-Hungarian empire and Germany were holding firm.”Sharma went on to note that the failure of the Dardanelles campaign, a military catastrophe in Mesopotamia, and setbacks on the Western Front had greatly damaged Allied morale.Two earlier attempts to break the Turkish defensive line running from Gaza on the coast to Beersheba, 43 kilometers inland, had failed, and this third attempt, a spontaneous charge, succeeded.“The Ottoman Empire’s control of the Middle East was shattered irrevocably, setting the stage for the post-war settlement that still exists under varying degrees of strain in the Middle East today,” Sharma said.What was most important from a Jewish perspective was what Sharma called the “asymmetry of history.”On the same day as the Battle of Beersheba, on October 31, 1917, the British war cabinet in London approved the text for what would become the Balfour Declaration, a declaration of sympathy for Zionist aspirations, said Sharma.“Together, these two developments, the Balfour Declaration and the Battle of Beersheba, would set off a chain of events that would eventually lead to the creation of the modern state of Israel in 1948.”Sharma said that, “For most New Zealanders and Australians, and for those who know a little about this event, the battle is defined by the astonishing mounted charge of the 4th Australian Light Horse Brigade. It was both a dramatic and a decisive event – unplanned, hasty, yet victorious; reliant on the daring and bravery of those soldiers commanded to charge...directly on the town. At about 4:30 p.m., some 500 riders charged, bayonets in hand because they did not have swords.”Curr quoted James McCaroll, a member of the New Zealand Mounted Rifles Brigade, who had observed the charge from the vantage point of Tel el-Saba, which had been captured shortly before by New Zealand troops.“A great sight suddenly sprung up on our left, lines and lines of horsemen moving. The Turks were on the run and the Australian Division was after them. We could see the horses jumping the trenches, dust everywhere.”The charge of the Australian Light Horse became essential. Had it not taken place, Beersheba might not have been captured before the last light, when the Ottomans would have destroyed the water wells before withdrawing under cover of nightfall, said Curr.He stressed the importance of remembering that New Zealand and Australian mounted riflemen, and soldiers of many other nations under the umbrella of the British and Ottoman Empires, did fight here nearly a century ago.“For New Zealand and Australia, it would mark the beginning of military engagement in this region that continues to present day peacekeeping roles in missions such as UNTSO and the MFO,” said Curr.The Battle of Beersheba, and the wider campaign in which it was fought, he added, “is the one where lasting peace has proved to be the most elusive. Although not directly connected to the battles of nearly 100 years ago, we still work and pray for an end to conflicts affecting Israelis, Palestinians, Jordanians, Lebanese, Syrians and Egyptians. As we remember and salute our fallen from the past, may we not forget those who suffer the effects of conflict and terror in the present, and continue to work toward a region where all who call these places home may live in peace and security, hope and prosperity.”