Bayit Yehudi politicians under fire for not standing strong on settlements

One activists shouted that Deputy Defense Minister Ben-Dahan was deceiving them. “You are just throwing sand in our eyes.”

By TOVAH LAZAROFF
SEPTEMBER 22, 2016 10:52
Bayit Yehudi MK Bezalel Smotrich defends party's support for settlements‏
Advertisement
A special “solidarity” meeting in Amona between settlers and members of the Bayit Yehudi Party on Wednesday night displayed all the solidarity of exploded firecrackers.The right-wing party is under fire for not taking a tough enough stand in support of West Bank settlements. Activists heckled Deputy Defense Minister Eli Ben-Dahan (Bayit Yehudi) until he was forced to leave the podium halfway through his speech.The minister tried to assure the audience by saying he and his party “made an enormous effort” to find a way save the Amona outpost, but the more he talked the angrier they grew.One activist shouted that Ben-Dahan was deceiving them. “You are just throwing sand in our eyes,” he said.In return, Ben-Dahan insisted, “I will not give up. I am certain a solution can be found to allow Amona to remain where it is.”
(Deputy Defense Minister Eli Ben-Dahan. Picture courtesy of: Bayit Yehudi)Last-minute attempts by the party to build bridges with settler leaders and activists have – needless to say – not met with much success.One activist compared Ben-Dahan to former prime minister Ariel Sharon, who was initially known as the “father” of the settlement movement.During his premiership in 2005, however, Sharon led the withdrawal from 21 Jewish communities in Gaza, and another four in the West Bank.Ben-Dahan told the audience, “Amona is very dear to us.”An activist shot back, “Sharon used to say that.”The political dispute was sparked by efforts to relocate 40 families from the Amona outpost, which is slated for demolition by December 25. The High Court of Justice has ruled that the small community, located on the outskirts of the Ofra settlement in the Binyamin region, must be demolished because it was illegally built on privately owned Palestinian land.Since 2013, Bayit Yehudi and the Likud have battled for the same right-wing voting bloc, with Bayit Yehudi positioning itself as the champion of the settlement movement.The pending demolition of Amona and the legislative push to legalize some 2,000 unauthorized settler homes in Judea and Samaria has brought that struggle to a head.A number of Bayit Yehudi politicians have been very active on the issue; chief among them Agriculture Minister Uri Ariel, parliamentarians Bezalel Smotrich, Shuli Moalem-Refaeli and Moti Yogev.Smotrich has even threatened that his party would not support the budget, which is expected to be voted on in the upcoming Knesset session, unless the Regulations Act passes in that session as well.But his threat has not drawn any support from his party head, Education Minister Naftali Bennett, who has stated that there is no need for such ultimatums.Twenty-four of the Likud’s 30 parliamentarians have signed a petition calling for the passage of a “regulations act,” a bill that would retroactively legalize the 2,000 homes, including those in the Amona outpost. Another three Likud parliamentarians have spoken in support of it.Only Likud parliamentarians Bennie Begin and Anat Berko have opposed the legislation.Prime Minister Benjamin Netanyahu, who has blocked similar legislative drives in the past, has yet to state his opinion on the matter.Amona residents have taken exception to private comments reportedly made by Education Minister Naftali Bennett and Justice Minister Ayelet Shaked (also of the Bayit Yehudi Party), that Amona would be evacuated, because the regulations act had no chance of passing. 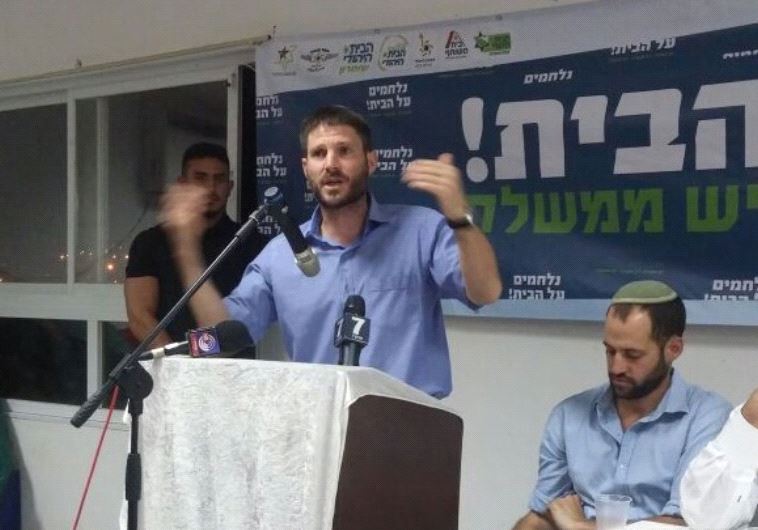 (Bayit Yehudi MK Bezalel Smotrich. Picture courtesy of: Bayit Yehudi)They wrote a letter to the two ministers canceling a scheduled meeting, although they noted they would be happy to meet with either of them in Amona itself.Such a meeting in Amona, they said, is something that has not happened since the current government was sworn in last year.Neither politician was at the party’s meeting in Amona.Among the stumbling blocs to the bill’s passage is an assessment by Attorney-General Avichai Mandelblit that the legislation is unconstitutional.“We are weighing many other options, aside from this law,” Shaked said, adding that many politicians who were standing with Amona have not stated the truth when it came to the outpost’s future.The regulations act, Bennett said, is only one option by which the 2,000 homes can be legalized. “Our goal is to bring forward a strategic plan and then to stand by it politically,” he said.That option could be the regulations act, according to Bennett. He noted that when similar legislation was brought forward four years ago, the Bayit Yehudi party supported it only to have Netanyahu block its passage in the Knesset.“The Bayit Yehudi advanced it and Netanyahu toppled it,” Bennett said.Both he and Shaked stated that they preferred to solve the issue of Amona through a plan put forward by Defense Minister Avigdor Liberman to relocate the 40 families there to abandoned property lots located right next to the outpost.In the last few weeks, Palestinians have submitted objections to the plan to the Civil Administration, claiming ownership over 29 of the 35 property lots.Many of those who supported the relocation plan now hold that it would be difficult to build a viable community on the remaining lots.Smotrich told the Amona residents on Wednesday night that his party’s entire faction, including Bennett, stands behind the Amona residents.