Bennett touts himself as education minister for all children

Nafatali Benett said, “The department of education is leaping in infrastructure and achievements in math, physics, chemistry, English, while classroom sizes are shrinking significantly.” 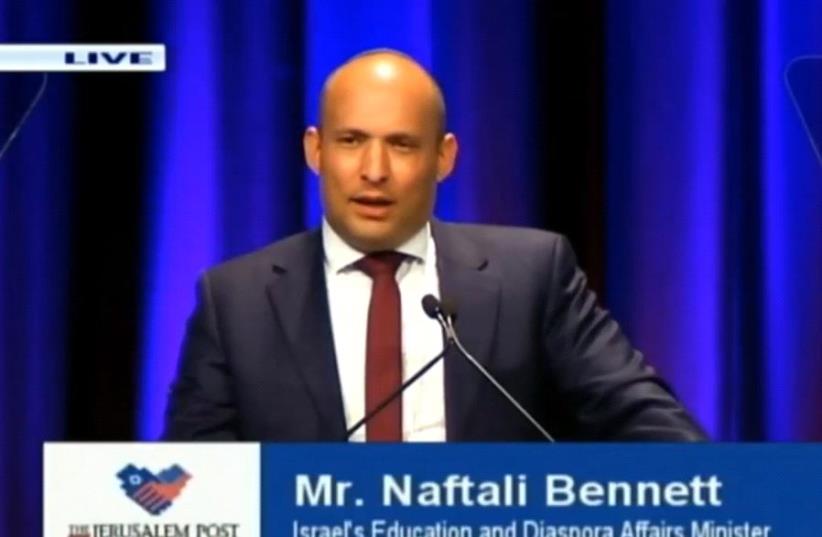 Naftali Bennett at the JPost Annual Conference 2017
(photo credit: screenshot)
Advertisement
“I am the education minister for all the children of Israel – religious, secular, haredi, Druse, Arab, Circassian, Beduin, all,” said Naftali Bennett during Wednesday’s Education, Culture and Sport committee meeting ahead of the upcoming school year.Headed by Shas MK Ya’acov Margi, head of the committee, and Bennett, the session touched on a variety of issues relevant to the education system including, hadata (“religionization”), classroom size, parent payments, special education and the initiative, “Transparency in Education.”“The department of education is leaping,” Bennett added, “in infrastructure and achievements in math, physics, chemistry, English, while classroom sizes are shrinking significantly.”He praised the state of Israeli education, adding, “Education is our real national security.” He explained the need to build more classrooms, recruit better teachers and change the model of preschools.“It’s a lot of hard work; I want to start the school year drama-free. The department should be for the students, not for theatrics.”Bennett praised the newly launched “Transparency in Education” website, saying: “It’s the first of its kind in Israel which allows transparency in all aspects of the educational systems including details on institutions, budgets, educational climate, classroom violence and how many graduates go to the army or national service. Now, everything is open and on the table. I invite you to look. This will help us deal with questions in the future.”He also emphasized putting more effort in teaching English, promising that this year, the level of English will increase, “It is 2017 and there are kids who can’t write a email or have a conversation [in English]; we will fix this.”During his presentation, he unveiled a program called “Israeli Judaism.” “I am proud of this program. “There’s talk of religionization; there is no religionization, which is to give every child in the State of Israel a chance to get to know the ways of our people, to know what kiddush is, to know who Tchernichovsky is and who is the Rambam, and who is Moses; to know what havdala is. “It’s not a sin to open a siddur. We are proud of this. I am proud of this program and I invite all the members of the Knesset, everyone, to open the book and stop with the media spinning.” Bennett also explained that this program gives teachers the ability to teach “why we need a state and why not move to Australia. We need answers for these things.”On the issue of haredim in the school system, Bennett said: “I am not at war with the them. I don’t want a war, I want to work.”Addressing the issue of parent payments, he promised to reduce such payments by 2019, noting his connection with the Finance Ministry.He concluded with special education, describing that when he arrived at his current post, problems abounded as the system was on “autopilot.” He explained the budget was sufficient but wasn’t reaching enough. “With my political power, I procured a quarter of a billion shekels and 100% is going toward special education.”His comment was met with angry outbursts from a mother who, while holding up a photograph on her phone of her son, claimed her son was being neglected and that there was no place in the school system for him. She was then physically removed from the meeting.Next Friday, some 2.2 million students from preschools to high school will begin the school year.