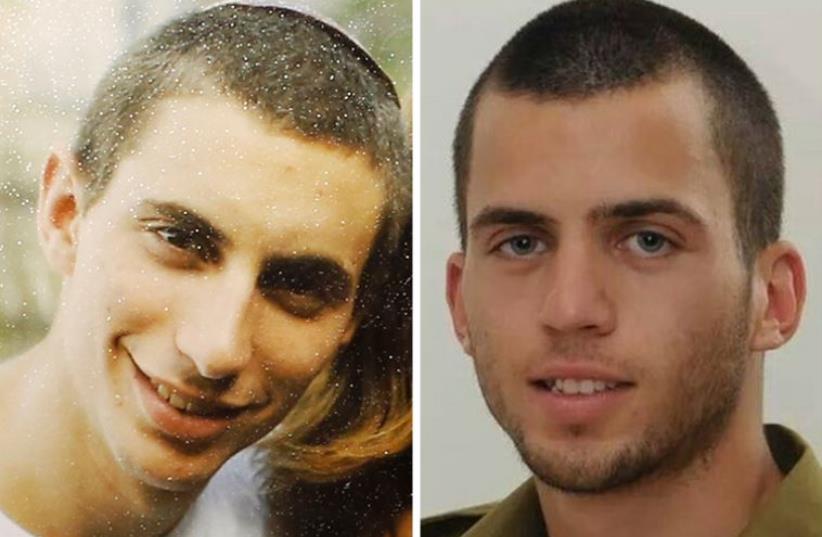 Oron Shaul and Hadar Goldin
(photo credit: REUTERS,Courtesy)
Advertisement
Parents who lost a child in the 2014 Gaza war weighed in on the State Comptroller Report that criticized political leaders’ handling and preparation for the war.The family of fallen soldier St.-Sgt. Oron Shaul, whose body remains in Hamas hands, blasted Prime Minister Benjamin Netanyahu and former defense minister Moshe Ya’alon, stating that the report proves mismanagement of the conflict by Israel’s political leadership.“The State Comptroller’s Report confirms our cries for the past two and a half years, which sometimes seemed surreal and unrealistic – Israel’s prime minister and former defense minister abandoned, concealed and whitewashed,” the family said. “This was the conduct of the war in Gaza that lasted more than 50 days and this was the hasty determination, contrary to Jewish law, that left Oron’s burial place unknown,” the family remarked.The family of Lt. Hadar Goldin, however, who was killed in the same conflict and whose body is also still being held by Hamas, urged against political mudslinging.“As a bereaved family who lost our most precious [child] to a Hamas terrorist tunnel in Rafah, it is sad for us to see the political tussle over the report,” the family said, urging Israel’s past and present political leadership “to fulfill their mission to lead the people of Israel and use their energy to advance the return of Hadar and Oron to Israel.”A group of bereaved parents chastised Israel’s military and political leaders for failing to take responsibility for the report’s findings regarding a lack of preparedness in dealing with the threat of Hamas tunnels from Gaza.“We demand the full implementation of the conclusions of the report and call for those who participated in Operation Protective Edge to take responsibility. We demand a military and political plan be presented to the public to change practices and priorities and to resolve the security situation before the threat becomes the next war,” the letter sent to Knesset Speaker Yuli Edelstein stated.“We deserve a leadership that takes responsibility,” the families added.