The State Comptroller's report, released on Wednesday shortly before Holocaust Memorial Day, indicated that Holocaust survivors in the country were not getting the rights they deserve. 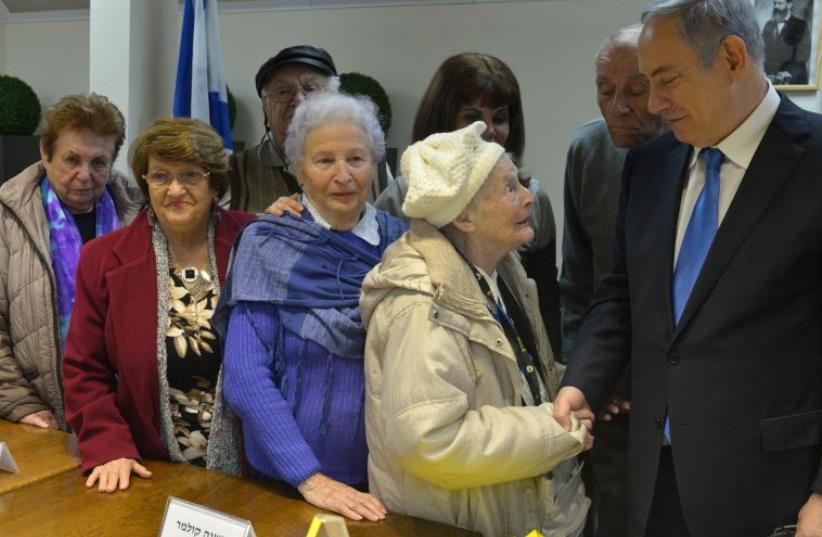 Netanyahu meets holocaust survivors, members of the "Yad Ezer Lachaver"
(photo credit: KOBI GIDEON/GPO)
Advertisement
Whether it is the failure to allocate financial, housing or medical assistance, failure to have a central authority stand up for Holocaust survivors, or failure on other issues, a newly published State Comptroller’s Report clearly said the government has failed to preserve those rights.State Comptroller Joseph Shapira’s report cautioned, “The state’s attitude toward survivors may affect the memory of the Holocaust for future generations.”Shapira warned that time is running out and the government must work to make improvements for survivors, whose average age is 85.The report, which was published Wednesday, ahead of Holocaust Remembrance Day this Sunday, said 16,000 survivors are waiting, some for years, to receive subsidized housing for which their eligibility has already been approved.That represents 90% of all who are waiting for housing assistance from the Absorption Ministry.The ministry itself noted that it allocates only 1,000 units each year to those on its list.Shapira wrote: “The long wait of survivors for proper public housing demands a general, system-wide perspective regarding those survivors who need this kind of housing,” to ensure the delays cease.Next, the report said, too many of the country’s roughly 214,000 survivors or World War II victims of antisemitism – around 1,000 of whom die each month – depend on non-governmental organizations in the absence of a government- sponsored body to oversee their welfare.The state’s Holocaust Survivors’ Rights Authority might be the logical organization on the issue, but it has not been granted overarching authority under the law. With more authority it could press various ministries to prioritize survivors’ rights.The lack of clarity in the state’s laws on the issue at times also leaves survivors ignorant about their rights, or leads to multiple ministries performing the same functions, said the report.In addition, the report found that in 2014 and 2015, NIS 60 million earmarked as aid to elderly survivors was never used for that purpose due to lack of oversight and plans by the Social Equality Ministry to use the funds.Likewise in 2016, the ministry used only NIS 4.3m. out of an NIS 40m. budgeted for survivors.While medical experts focused on survivors’ issues have recommended expanded services for assisting with their emotional issues, the report said that the expansion to date has been minimal. Also, Shapira said that NGOs have handled payments for survivors’ many dental needs, highlighting another lapse in state assistance.Further, no state entity has mapped out the needs of survivors at a meta-level to better address their needs, stated the report. This is all the more critical, noted Shapira, when so many of survivors’ benefits have been approved, but are not being realized.The Center for Organizations for Holocaust Survivors, an umbrella body which helps Holocaust survivors, said that it hopes the report’s findings are taken seriously and its recommendations adopted.“Even though improvements were made since the publication of the previous report, a high percentage of holocaust survivors still live in poverty because of inconceivable bureaucracy, patchwork legislation, deficiencies in health services and insufficient resources,” the organization said in a statement.Jerusalem Post Staff contributed to this report.