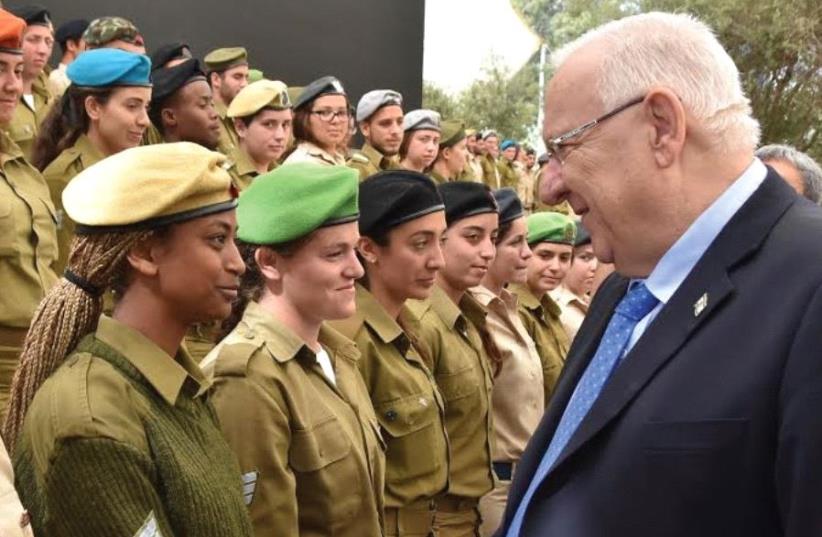 Reuven Rivlin tells IDF soldiers they are ‘the glory of Israel’ on April 27, 2017 at the President’s Residence in Jerusalem
(photo credit: Mark Neiman/GPO)
Advertisement
President Reuven Rivlin praised and expressed support for visiting city and local authorities managers on Wednesday.The meeting in Jerusalem of some one hundred plus members of the 180-member Forum of CEOs and Secretaries of Local Authorities was in the framework of celebrations of the 50th anniversary of the city’s reunification and the 70th anniversary of the establishment of the state.“Sometimes it brings you into the line of fire, to the point of confrontation. But the inner faith of these linked words – public servant – is stronger than anything else,” Rivlin told the group.He voiced the hope that this strength would continue to accompany the CEOs in all their endeavors.In greeting his colleagues, Amnon Merhav, the CEO of the Jerusalem Municipality, said that Jerusalem with 900,000 residents was a microcosm of the country reflecting true pluralism. Jerusalem has the largest Arab population and the largest haredi (ultra-Orthodox) population and the most diverse demography in which communities that are vastly different from one another work together for the benefit and well-being of the city, he said.Detailing the day’s program, Merhav said, “We are traveling from the ancient past to the promising future.”This entailed a visit to the tunnels under the Western Wall, an inspection of Ammunition Hill and its renovated facilities, and meeting with Mayor Nir Barkat to hear from him about the new commercial entrance to the city being built, prompted by the near completion of the rail line that will enable an express train to run between Jerusalem and Tel Aviv.Rivlin, 78, recalled that when he was a small boy before the establishment of the state, there was an Arab hawker by the name of Abdullah, who lived in Sur Bahir, an Arab neighborhood on the southeastern outskirts of Jerusalem, who used to come riding on his donkey to the Jewish neighborhoods. When he came to Rehavia, he spoke fluent Yiddish to the residents, and when he went to Mea She’arim, which bordered an Arab neighborhood, the residents spoke fluent Arabic with Abdullah.There was a sense of cultural and interpersonal unity that proved that people of different backgrounds could live together in harmony. There was a specials kind of DNA in Jerusalem in those days, said Rivlin, and today’s challenge is to revive the DNA that was.Rivlin also talked about his vision for integrating what he calls the four tribes into the workforce and into joint social and cultural activities. Secular, haredi, Arab and National Religious communities are each growing minorities, but are distancing themselves from each other, Rivlin contended. There is no reason why they cannot work together while maintaining their own traditions and beliefs.As a seventh generation Jerusalemite and former opposition leader in the Jerusalem City Council, Rivlin is thoroughly familiar with Jerusalem which he said is “the most riveting and most complex city in the world with the greatest potential.”It is a city in which Palestinian residents can live in harmony with Israelis, he said.“If people can live together in Jerusalem, there is great hope for the whole country.”Merhav said that Rivlin is the No. 1 citizen of Jerusalem and the city’s chief advocate.Forum chairman Doron Milberg, who is the CEO of the Rehovot Municipality, added that even when what Rivlin says is unpopular, he has the courage to say what needs to be said. “Continue to be who you are,” Milberg urged the president.Interior Ministry director-general Mordechai Cohen, who shares Rivlin’s four tribes vision, said that Rivlin is not only a man of words, but a man of deeds. The rift that exists is not only between the four tribes, he said, but also between the government and the citizenry, and between citizens and local authorities.“The local authority must be in daily contact with the citizens,” Cohen said.“The local authority is not the problem of society, it is the security of society,” he insisted. “The local authority is not just the provider of services; it is the main factor in Israeli resilience.”