49-year-old Aziz Awisat was also accused of aiding the enemy in wartime. 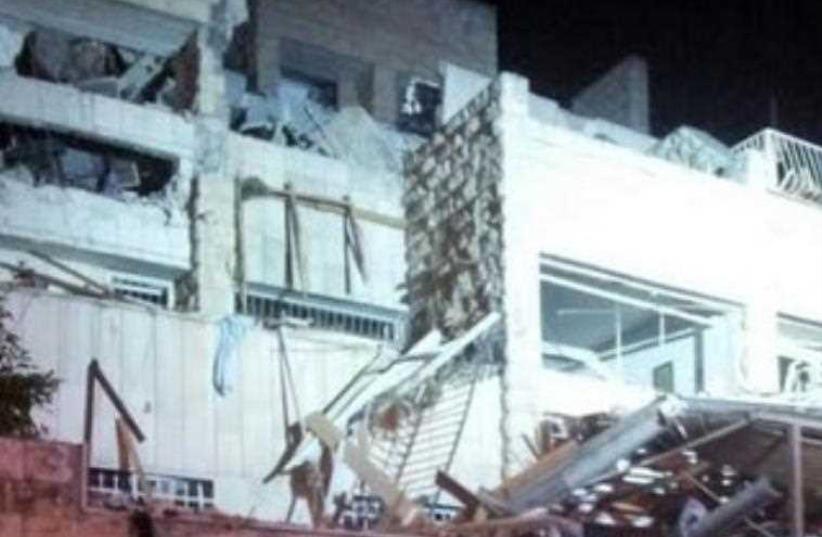 Jerusalem gas explosion, January 20, 2014.
(photo credit: MAGEN DAVID ADOM)
Advertisement
A three-judge panel from the Jerusalem District Court on Wednesday sentenced the man who caused nine gas leaks with the intention to cause explosions to 30 years in prison.Deputy Court President Jacob Zavan wrote that “the actions of the accused, including the nationalist motivations, at their core harm the fundamental values of: The sacredness of human life and the wholeness of the human body, public order and the sovereignty of the State of Israel.”He added that Aziz Awisat wanted to “cut off the life of a human being with the purpose of aiding terrorist organizations in their war” against the state.He was convicted of nine attempted murder crimes by his signature attempted gas leak attacks and one additional attempted murder crime from when he attacked a haredi man with an ax in 2012, seriously wounding him.The Jerusalem District Attorney’s Office submitted an indictment against Awisat, a 49-year-old resident of the capital’s southeastern Jebl Mukaber neighborhood, regarding his terrorist activities in March 2014.He was also convicted of aiding the enemy in wartime.The court arrived at the 30-year sentence as a midpoint of 20-40 years that he could have faced after adding up multiple seven-15 year sentences for various separate crimes.He first considered carrying out terrorist operations and assisting Israeli enemies in 2012.Awisat was motivated to perpetrate the attacks as “revenge for Israeli acts against al-Aksa Mosque, IDF operations against Gaza and harm to Islam.”The ax attack occurred first, on April 2, 2012.On January 23, 2014, Awisat was at a National Insurance Institute office in Jerusalem in order to request certain payments when he heard the security guards talking about the gas canister that had exploded in the Gilo neighborhood three days earlier, killing three people and injuring 11.Two weeks later, Awisat decided to perpetrate a similar gas explosion.