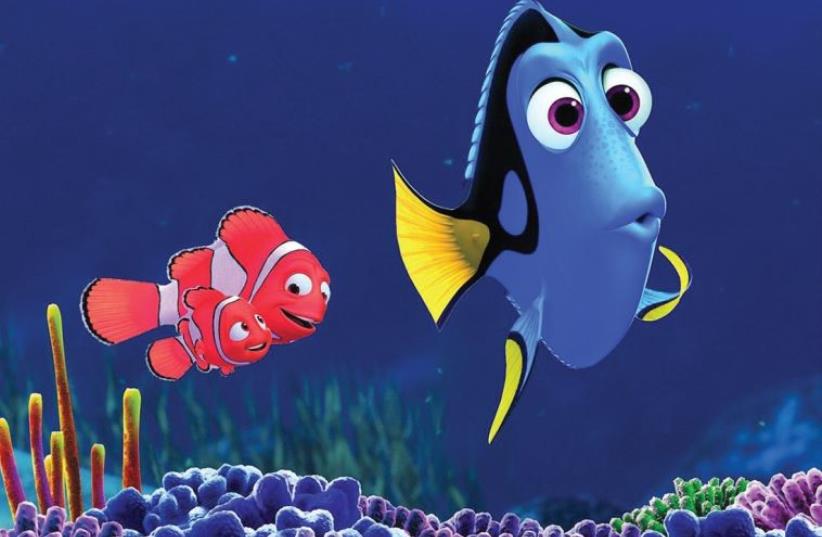 ‘Finding Dory’
(photo credit: PR)
Advertisement
Show business legend to the contrary, it’s not every supporting player who can go out there and become a star. Determined Dory, the crowd-pleasing forgetful sidekick in the fish tale Finding Nemo, is now front and center in Finding Dory and the results are only sporadically encouraging.Because no one compensates for a thin concept like the people at Pixar, there is a lot to admire in the animated Dory, including stunning undersea visuals and an ocean full of eccentric and engaging aquatic creatures. But, as the 13-year gap between Nemo and Dory indicates, this was not a concept that cried out to be made.As Nemo fanciers will remember, Dory is a blue tang with short-term memory problems. Pixar veteran and Nemo director Andrew Stanton (who co-wrote here with Victoria Strouse) decided to take these issues a bit more seriously, the result being something oddly reminiscent of a kiddie version of Christopher Nolan’s Memento.Unlike that film, however, Finding Dory struggles with making its protagonist’s memory problems involving. Even Ellen DeGeneres’ patented likability goes only so far with a character who spends the first part of the film either monotonously repeating “Hi, I’m Dory, I suffer from short term memory loss” or getting hysterical over things unremembered. You are supposed to find this deficiency endearing, but it also might make you, well, crabby.The filmmakers themselves might have worried about this, because they’ve made Dory’s plotting and dialogue overly frantic as if to compensate. More than that, they’ve arranged things so that Dory’s memory gradually comes back. Not surprisingly, the more she remembers, the more involving the film with her name on it gets.Finding Dory begins with Dory's back story and her two parents, Charlie (Eugene Levy) and Jenny (Diane Keaton), both infinitely caring and loving individuals.The story proper begins about a year after the events of Finding Nemo, with Dory hanging out at the Great Barrier Reef with young Nemo (12-year-old Hayden Rolence) and his worrywart father, Marlin (a returning Albert Brooks).Suddenly, without warning, Dory has glimmers of memory of her parents and their past life together in a place called the Marine Life Institute in Morro Bay. Never mind that California means yet another trip across the ocean, nothing will do but that Dory, Nemo and Marlin (aided as before by massive sea turtle Crush, voiced once again by Stanton) brave the journey to follow Dory’s vague hunch.The Institute (modeled on places like the Monterey Bay Aquarium and the California Academy of Science in San Francisco) turns out to be a place specializing in “rescue, rehabilitation and release.” The establishment uses the voice of Sigourney Weaver for its public service messages, which invariably leads to amusing moments.Also fun, and the saving grace of the picture in fact, are the other sea creatures Dory encounters as she tries to figure out where in the institute her parents might be.Easily the most prominent of these is Hank (Modern Family’s Ed O’Neill), a mimic octopus adroit at blending into the background who wants nothing more than to spend his days in an aquarium in Cleveland, far from the perils of the actual ocean.Equally entertaining are Rudder and Fluke, a pair of rowdy British-accented sea lions who call everyone “mate” and are voiced, in an unexpected The Wire reunion, by Dominic West and Idris Elba.Also key to the plot, which gets unfortunately frenetic with all manner of fishy misadventures as time goes on, are yet two more creatures, near-sighted whale shark Destiny (Kaitlin Olson) and Bailey (Ty Burrell), a beluga whale who needs help with his sonar.As noted, the computer-generated undersea look of Dory is quite lovely, filled with gorgeous colors and unexpected textures. When someone looks around and says “there are a lot of fish here,” they are speaking the literal truth.Yet, try its hardest though it does, Finding Dory remains a mid-range effort, not a game changer like Wall-E (still Stanton’s best film), Up or Inside Out. No one can be a genius every time out, not even Pixar. – LA Times/TNS.FINDING DORY
Written and directed by Andrew Stanton
With Ellen DeGeneres, Albert Brooks, Ed O’Neill
Running time: 97 min.
Advertisement
Subscribe for our daily newsletter