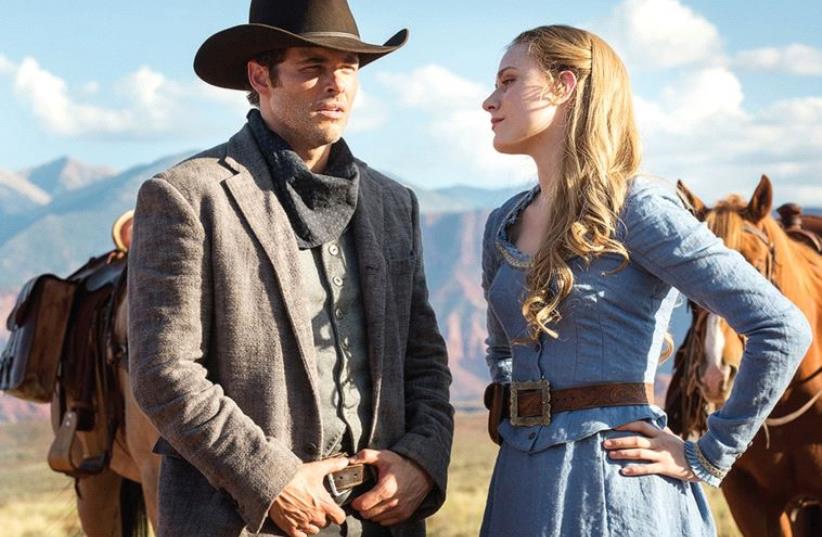 Westworld
(photo credit: PR)
Advertisement
Richard Lawson of Vanity Fair had this to say about pilot episodes of television series, in his review of Westworld: “Pilots aren’t mere introductions anymore - they’re first dates that tend to end in either marriage or nothing.”If a show doesn’t completely grab you in the pilot, why should you keep watching - unless it’s the second coming of The Wire, which required you to see at least four episodes before you could begin to keep the characters straight? Westworld, an ultra-violent reworking of the 1973 movie of the same title about robots malfunctioning at a theme park, is not the next The Wire. It is HBO’s new bigbudget series that is designed to hold onto Game of Thrones fans once that series ends. It is being shown on HOT Plus and YES Oh at 4 a.m. and 10 p.m. on Mondays, and on HOT VOD and YES VOD.Based on the early episodes, it’s a mixed bag. Here are its pros and cons: 1. It’s star studded. It features Anthony Hopkins as the subtly deranged creator of a breed of incredibly realistic robots, called hosts. Ed Harris plays a sadistic theme-park client. Evan Rachel Wood (True Blood and Mildred Pierce) is Dolores, a sweetnatured robot whose optimism makes her convincing as a non-human. Sidse Babett Knudsen, better know as the prime minister of Denmark in Borgen, is a corporate technical trouble shooter. Thandie Newton (ER, Crash) plays a gorgeous robot madam with a British accent. And even the actors who aren’t big stars are very good, particularly Louis Herthum as Dolores’ Shakespeare-quoting father.2. It looks amazing. When HBO decides to open its wallet, that’s big money. The gorgeous Western vistas that Dolores rides through on her horse contrast with the high-tech, steel-and-glass nightmare world of the laboratory where the robots are programmed. These futuristic lab scenes make The Matrix, which had a similar theme and looked so cool in 2000, seem like a stick-figure drawing by a 5-year-old.3. It’s escapism. Nothing here is likely to remind you of your life or current events, which can be good or bad, depending on how you look at it.4. It has all these cool HBO no-expenses-spared touches, like an orchestral version of the Rolling Stones’ Paint It Black.5. In the original movie, Westworld was just one of the several theme parks. There were also ones Ancient Roman and the Middle Ages themes, so presumably upcoming episodes or seasons will include those as well.Now for the cons:1. Everything that could be said about realistic robots was said in Ridley Scott’s 1982 film, Blade Runner, starring Harrison Ford and based on Philip K. Dick’s novel, Do Androids Dream of Electric Sheep? Can anyone seriously be concerned about robots having souls? A zombie apocalypse seems more likely. If it’s a metaphor for how we treat migrant workers, people in service jobs etc. it’s very heavy handed.2. The violence is intense, and will put off many. When the robots are attacked, they bleed and it looks just like a human being hurt. But the show excuses this gore fest, apparently, on the grounds that they are not human so it’s OK to watch a half-dozen or more graphic mutilations per episode. This is the reasoning behind body count on The Walking Dead as well.A few other questions raised by the show: How can the guests tell who is a robot and who is another tourist? Wouldn’t the guests kill each other all the time? Would that many people really want to spend their vacations in a Western setting? They say movies with a Western theme are hardly ever hits. A Star Wars theme park or one featuring robot Kardashians would make more money.Is this the next Game of Thrones - or is this year’s Vinyl, the supposedly surefire hit about the music business in the Seventies developed by Mick Jagger and Martin Scorsese, which was canceled after one season? The next few episodes will tell.