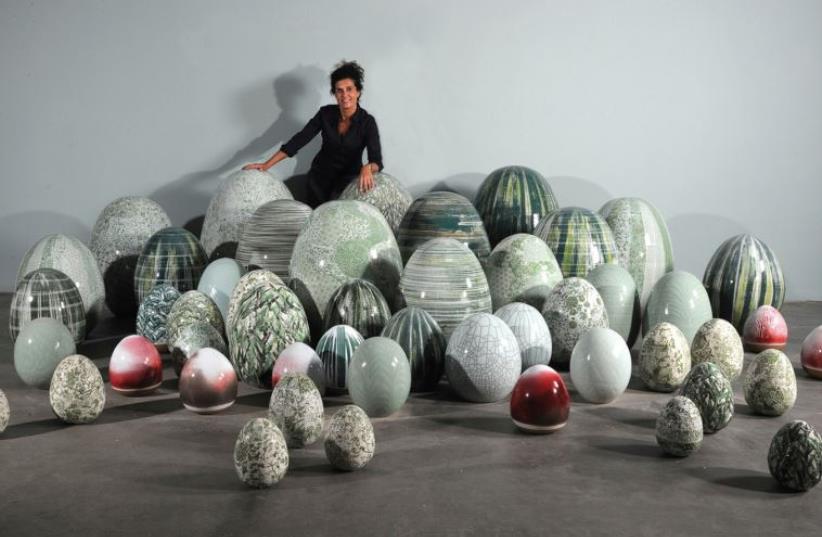 Ceramic artist Martha Rieger’s exhibition ‘Columbus’ Egg’
(photo credit: HAGIT GOREN)
Advertisement
Martha Rieger is aware of the wisdom of not putting all one’s eggs in the same basket, but she doesn’t seem to be overly concerned about breakages in general. That is evident from the works she will display at her “Columbus’ Egg” exhibition, which opens at Inga Gallery of Contemporary Art in Tel Aviv on February 12 and runs until March 19.The show occupies both rooms of the gallery and comprises two very different parts. One room will feature an impressive array of glazed and painted ceramic eggs, while the other space will host carefully arranged assemblages of porcelain fragments of varying sizes.Dimensions are clearly central to the 52-year-old Brazilian-born artist’s line of thought and creativity. The oval-shaped works range from the comfortably handful size to nigh on to gargantuan. Some of the eggs are around 1.2 meters tall.Presumably, working on an egg that is, say, 15 cm. high compared with one that is close to 10 times that presents the artist with a completely different ethos. It must be easier, for example, to get into the finer details of the larger works of art. But, in fact, the artist says that she pays the same amount of attention to the nitty gritty of her work regardless of the scale, but that using more generously proportioned substrata for her work allows her more breathing space, in more senses than one.“Working on the large eggs is a release for me, a release from having to justify my artistic technique as a ceramic artist. It takes so long to learn the technique that when you get down to applying it, you are constantly occupied with proving to yourself and the world that you are implementing it correctly,” she says.So how does working on such outsized items free her from that responsibility? “As soon as I get to such large pieces, I can’t possibly do the work myself,” explains Rieger.It is a simple matter of logistics, as well as physique.“As soon as the eggs got to be so big, I needed the help of workers. As soon as you let someone else touch your creation, you actually have to let something go. You have to relinquish this obsession we have with this thing we call ‘technique,’ and that allows you to express more emotion in the work. The big eggs require the strength of three men, and I have to be there to supervise. The men are, in fact, construction workers who know nothing about the creating art. But it is as if I am a client of my own work, looking in from the outside, so my demands of the quality of the art are much higher. That means that the work comes out with a sense of greater freedom, with more emotional content and, I think, more charm,” she explains.Letting go may be a release, but it also demands a leap of faith. Rieger says she got a confidence booster that encouraged her to go for broke from a cultural and artistic source of the highest order. The seal of approval was provided by the jurors of the 2012 edition of the International Ceramics Festival in Japan.“It is very tough to be accepted to the festival competition, let alone win it. When I won the competition, for me it was like getting a framed diploma to put up on my wall. I could let go [on the technique front], and I no longer had to prove anything to anyone that I could do the work. I knew how to do it – even the Japanese said so!” laughs Rieger.“I could take a step back and enjoy ceramic art in a different way. I am athletic and healthy, but I can’t do things now that I could at the age of 40 or 30. When I discovered I could get others to do the physical work for me, and precisely the way I want it to be done, that relaxed me,” she says.Rieger says that “Columbus’ Egg” is something of a trailblazer exhibition.“In Israel, especially, people relate to ceramics more as a craft than an art form. Here I have an opportunity, possibly for the first time in Israel, to present a ceramics exhibition par excellence. For me, this is an entry into a different sphere, a sphere which I didn’t know about. I am very excited about the exhibition,” she says.The show, says the artist, is more than the sum of its seemingly contrasting halves.“I designed the layout of the exhibition based on the design of the gallery, which has two rooms, with a low partition between the two spaces,” she explains. “As soon as I saw the two rooms and the charming plan of the gallery spaces, I decided I would do something contrasting – one thing in one room, and the ‘anti’ of that in the other room.”The official title of the show, which is curated by Irena Gordon, references the story about the Spanish explorer who, when faced with criticism that anyone could have discovered America, challenged his detractors to stand an egg on its head. After they failed, he tapped his egg on the apex to flatten it before completing the task – thereby conveying to the others that anything is easy once you have been shown how to do it.Rieger also has an unofficial moniker for the exhibition.“I call the exhibition ‘The Broken and the Complete,’ which is what you have in the two rooms. Today, I fully understand that in order to have something that is complete, you also need to have all the composite parts,” she says.

The exhibition takes place at Inga Gallery of Contemporary Art in Tel Aviv from February 12 to March 19.
Advertisement
Subscribe for our daily newsletter