The celebrity chef’s Hiro Ramen Bar is one of the stars of Sarona. 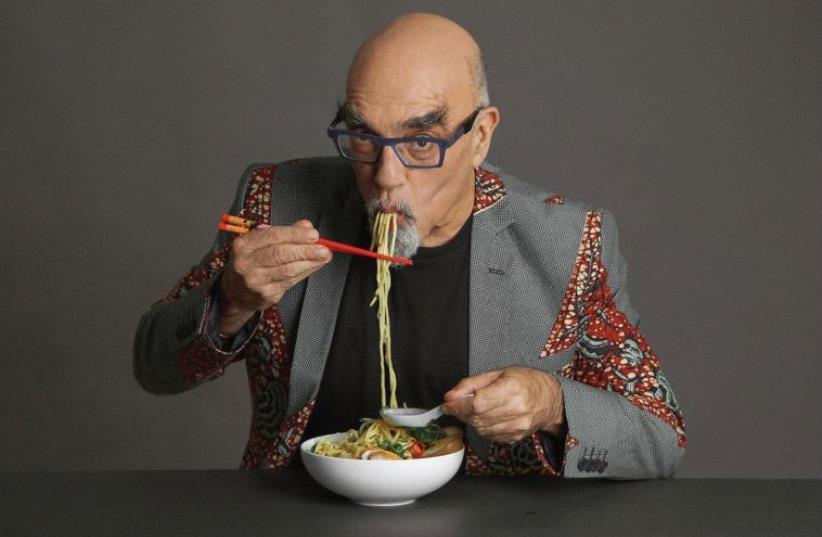 Israel Aharoni
(photo credit: HAIM YOSSEF)
Advertisement
Yisrael Aharoni was Israel’s first celebrity chef, before the concept was even on the radar of Israeli popular culture. He has always been this country’s culinary pioneer: the first Israeli chef to study in Taiwan and return to open a Chinese restaurant in Tel Aviv, followed by a French restaurant, a line of frozen Chinese meals, a series of television shows, a weekly column in Yediot Aharonot’s weekend magazine, and dozens of cookbooks. His current globetrotting TV show with entertainer Gidi Gov, now entering its sixth season, has only solidified his unique personal brand.Aharoni has not had a restaurant for well over a decade, although many proposals came his way. Finally, when he was approached to undertake a project in the emerging Sarona Market, he agreed – on the condition that it be a ramen bar.“I had been to Japan four times in recent years,” Aharoni says, “and ramen was my latest passion.”Once again, Aharoni is a trailblazer.“This is the first ramen bar in Israel,” he points out. “There are Japanese restaurants that serve ramen, but this is the only place dedicated first and foremost to serving these meals in a bowl.”I found Aharoni working the automated noodle cooker in the assembly line operation that is the Hiro Freestyle Ramen Bar by Aharoni.“When I am in town,” he says, “I am in the kitchen almost every day.”After taking me through the process of combining the precise ingredients of building the perfect bowl of noodle soup, he had me try the signature dish: gochu ramen (NIS 54) – braised brisket, Korean fermented chili paste, pak choi, shiitake mushroom, takuan, daikon radish, spring onion, nori seaweed and marinated egg.Although the menu cautions that it is spicy, I found the heat to be in exact balance with all the other ingredients, which were ideally proportioned. It was a generous portion that was gone all too quickly.One of the pleasant surprises in the ramen was the particularly tasty egg.Aharoni reveals the secret: The medium-boiled egg is marinated overnight in an exotic mixture of soy, mirin, sake, ginger and honey.Next came chicken gyoza (NIS 32) – steamed dumplings that are fried quickly on one side to create a crispy crust. The filling of white meat chicken, spring onion and shiitake was delectable. (There is also a vegan gyoza, as well as vegan and vegetarian options throughout the menu.) For the summer, Hiro has introduced something new: Asian buns.“I thought the demand for soup might lessen in the hot months,” Aharoni confides. “Interestingly, this has turned out not to be the case.”The chicken bun (NIS 22) comprises marinated chicken breast, chili honey mayonnaise, lettuce, pickled daikon, green onion and crispy shallots on a steamed white bun. Once again, I was disappointed that there was not more of it.There are a number of side salads, of which I had the green vegetable salad (NIS 19): snow peas, broccoli, peas, spring onion and pralined cashews in a delicate lemon and miso dressing. The vegetables were cooked al dente – not an easy feat, Aharoni claims, since each vegetable requires a different amount of cooking time.Aharoni is a particular fan of the dressing, largely because he considers miso “one of the wonders of the culinary world.”Noting that the fermenting process takes one to three years, Aharoni praises miso as one of the great flavor enhancers.“Try smearing a bit on a steak, and see how much better it is,” he suggests as just one of several tips.Hiro is not large enough to have a bar, but that doesn’t stop the chef from serving specialty cocktails, premixed and served in handsome glass flasks bearing the restaurant’s name and logo. One of the two cocktails, O-Saki Ni Doozo, is a tart and distinctive blend of sake, apple juice, roasted sesame syrup and yuzu juice. For NIS 20, there is enough to drink with your meal with some left over to take home in your own souvenir bottle.Hiro serves no desserts. As Aharoni notes, ramen bars in Japan do not offer desserts. Of course, there is no lack of places in the immediate vicinity where one can satisfy a craving for a sweet finale.According to Aharoni, Hiro (the Japanese name can mean “abundant” or “generous”) serves hundreds of bowls of ramen a day; it certainly gets crowded at lunchtime. Its success has prompted him to move ahead with plans for a larger ramen restaurant, which will feature a greater variety of ramen options than Hiro’s current five.We will certainly report on the second establishment when it opens.The writer was a guest of the restaurant.Hiro Freestyle Ramen Bar Not kosher Sarona Market 3 Kalman Magen, Tel Aviv Tel: (03) 558-3505