Alphabet soup: ‘GOT’ and ‘OITNB’ are returning

YES is having gay-themed films for Pride Week, which will continue to run until June 24. 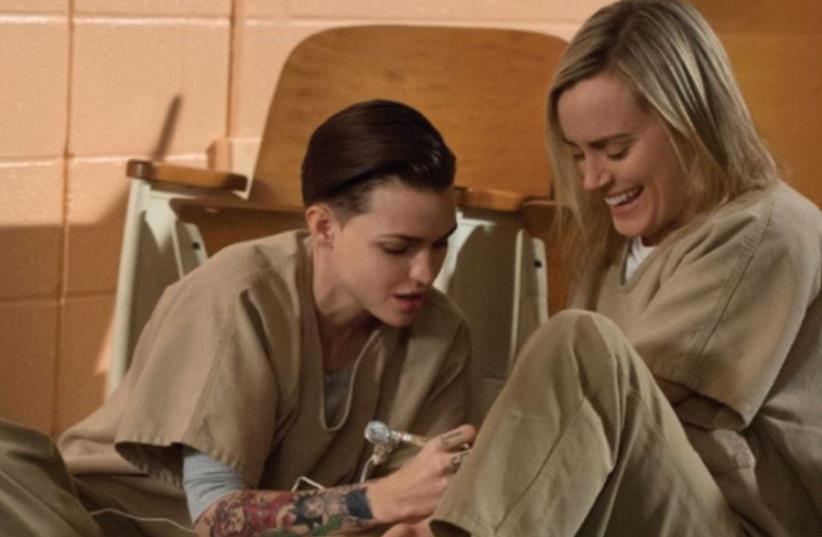 'Orange is the new black'
(photo credit: PR)
Advertisement
Once upon a time, television shows took their inspiration and plot lines from movies.Lots of shows were watered-down versions of gangster movies, Westerns, etc. But in our new Golden Age of Television, things are reversed.In that context, the new, dismally reviewed movie King of Arthur: Legend of the Sword, which is full of mind-numbing special effects and idiotic dialogue, clearly hopes to cash in on the popularity of Game of Thrones. It’s got the same period costumes, scenes of cute kids menaced and threatened with torture, people turning into zombie-esque creatures with weird eyes during battle scenes, and scruffy but hunky heroes. Writes Charlie Jane Anders in Wired, the new film “telegraphs from the beginning how desperately it wants to be Game of Thrones. . . from the Battle of Castle Black-wannabe opening skirmish to the inclusion of two Thrones stalwarts — Aidan Gillen (Petyr Baelish on Thrones) and Michael McElhatton (Roose Bolton) — [the] movie is a twohour reminder of the show you wish you were watching instead.”Soon, you won’t have to wish, though. In advance of the seventh season of Game of Thrones, YES is bringing back the GOT channel, Channel 16, which will air all the previous seasons and interviews, behind-the-scenes shows, etc., starting on June 6. It will run until the first episode of the new season is shown, on July 17, so fans can look forward to snow in July.The wait will also be over soon for lovers of Orange Is the New Black. Season 5 begins on June 10 on HOT Xtra VOD, and since it’s a Netflix series, all the episodes will be released then. One episode at a time will air on HOT HBO starting on June 11, from Sunday to Thursday at 10:50 p.m.Last season ended with the death of Poussey Washington (Samira Wiley) and the prison riot that followed. The new season picks up right then. She does appear in one episode this season, presumably in a flashback.YES is having gay-themed films for Pride Week, which will continue to run until June 24.These films will be available 24 hours a day on YES VOD and will be aired at various times throughout the month on YES 3.These films include both Israeli and international films. Among the many international movies is Moonlight, the Oscar Best Picture winner that was announced only after presenters Faye Dunaway and Warren Beatty mistakenly said La La Land had won. Directed by Barry Jenkins, Moonlight was originally based on a play. It tells the story a poor, black boy in Florida who knows from an early age he is gay and how this alienates him from most of the people around him. The movie is in three parts. The first two parts, in which the hero is a sweet kid with a drug-addict mother who is befriended by her dealer (Mahershala Ali, who won the Best Supporting Actor Oscar), and a vulnerable teenager, are excellent. The final third, in which he is an adult, doesn’t quite measure up, but it’s an impressive film.The film Barash, the story of two Israeli high school girls who fall in love, is sexy and funny. It has some narrative weaknesses, especially in the more dramatic parts, but it’s likely that it will play well on the small screen.It’s all one big show: Shots Fired, a decent but uninspiring new drama series that mixes police procedural with racial politics, airs on Mondays on YES Drama at 9:15 p.m. and on YES VOD. It’s about an FBI investigation into the killing of a white man by a black police officer in the South. That young officer is played by Tristan Mack Wilds, whom The Wire fans remember fondly as the tragic teen Michael Lee. Stephen Moyer, best known as sexy vampire Bill on True Blood, is a tough police lieutenant, while Helen Hunt, who was the charming Jamie on Mad About You in the 1990s, is the governor of the state. Her Southern accent seems to come and go, but it’s nice to see her.