All the world’s a stage for Shira Patchornik 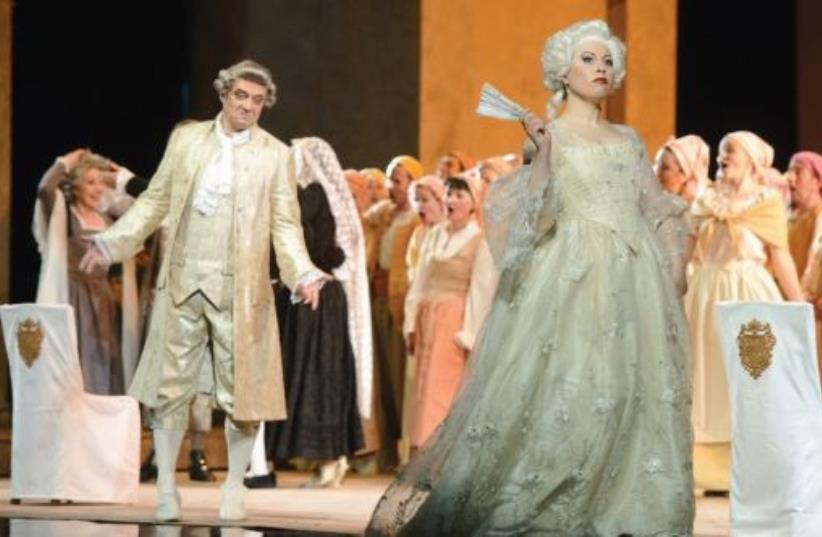 Shira Patchornik didn’t dither too long over her career choices. By the time she was nine, she had been invited by veteran actress, singer and junior show honcho Nitza Shaul to perform in a production for children at the opera. Since then, there has been no stopping her.

Now at the age of 28, she is taking on her first senior role with the Israeli Opera as Susanna in Mozart’s The Marriage of Figaro. She shares the part with fellow Israeli soprano Daniela Skorka, with 10 performances lined up between March 27 and April 9.

Patchornik may subscribe to Shakespeare’s contention regarding the global reaches of the performing confines, but she is far more focused on the actual dais, where the entertainment action ordinarily takes place. “I was never in doubt that standing on the stage was fun for me,” she smiles.

Then again, there was the odd thought about other avenues of professional pursuit. “When I finished high school, and I was about to join the army, I took a moment to consider whether I wanted to be a paramedic,” she adds. She’s paid her preparatory dues. “That was something I really enjoyed, too. When I was in high school, I volunteered with Magen David Adom. All my father’s side of the family work in the life sciences, biology and chemistry and that sort of thing.”

In the end, the IDF inductee’s medical aspirations were scuppered by temporal logistics. “It didn’t work because of my mobilization date,” she chuckles. “Paramedics’ recruitment only happens once a year, in July, and I was born in November so I wasn’t 18 years old yet in July of that year. They didn’t agree to defer my enlistment by almost a year.” The medical profession’s loss is the operatic world’s gain.

The frustrated aspiring paramedic was now free to follow her artistic path. “Fortunately, I was recognized as a distinguished musician, so I could get on with my singing, full steam ahead,” she says.

Opportunity soon came knocking at Patchornik’s door. “While I was in the army, the Israeli Opera put on a production of [Benjamin Britten’s] The Turn of the Screw, and I sang the biggest children’s role there is in opera – Flora in The Turn of the Screw.” The die was duly cast. “Everything clicked after that,” says the singer.

I noted that things had been clicking for some time. “Yes, I was with Nitza Shaul and I acted in all sorts of movies, and I sang in all kinds of choirs. And when I was 14, I sang in The Cunning Little Vixen [by Czech composer Leos Janacek] which was also with David Pountney.” The British director Pountney has worked with the Israeli Opera several times over the past two-plus decades and is at the helm of the current Mozart offering. “I did almost every part there was going for kids. I sort of took over from Einat Aronstein when she got too old to do those parts. That was such fun. And that’s an understatement,” she laughs.

Patchornik also landed a part in Puccini’s Tosca at the Opera House, and her impressively wide-ranging burgeoning operatic bio also features contributions to Mozart’s Don Giovanni, Carmen by Bizet, Puccini’s La boheme and Un ballo in maschera (A Masked Ball) by Verdi. Not bad going for one of still tender years.

“I just wanted to be in the limelight,” she exclaims. “I loved the drama and all of that.” So, I presumed, there was no stage fright. “Never,” she states. “I have never had that. It just feels natural to me to be on the stage. I can be nervous and excited beforehand, but once I am on the stage, my heartbeat slows down to something really gentle. Maybe someone should check that out, physiologically. I feel so much bigger on stage. I really light up there. My energy level shoots up 700 levels. That’s what you need on stage.”

This isn’t just about ego, although if you are going to put it out there for audiences, you have to have at least some degree of self-confidence that you can do the business. From a very early age, Patchornik has known this was what she was going to do, come what may.

Patchornik confesses to being an opera junkie. “I am so focused once I am on stage. You won’t find me concentrating too well for too long in a classroom with a bunch of other students. But, when I am on the stage, I am completely locked into what is happening - the conductor, the orchestra, the choir and even any mistake that may occur - and to take that in a positive direction. I only had that level of concentration before when I volunteered with Magen David Adom.”

By the age of 22 she was ready to up anchor and seek opportunities in wider and better monetary-oiled pastures. Like many of her compatriot musicians, she headed for Germany. She had nary a qualm about landing in a foreign culture, learning a new language and being far away from her family. “I never had that,” she states. “It was just what I had to do to take my career to the next stage. It wasn’t scary. That’s all.”

A short while later she proffered her precocious talent to the Vienna Opera Studio. She also won an opera singers’ competition in Vienna, which led her to a work contract with the Wiesbaden Opera Ensemble in Germany. She later struck gold in another contest in Austria, this time in Innsbruck, and that spawned the much-appreciated role of Anne Frank at the Turin Opera House in Italy.

It was an emotive and challenging experience for her. “I sang the [monodrama] role of The Diary of Anne Frank, on International Holocaust Day. I sang for an hour. It was very demanding.” That also allowed her to spread her musical wings somewhat. “It is modern music. But it is Russian [by Grigory Frid], not like [20th-century American avant-garde composer and music theorist] John Cage. But it was tough.”

And rewarding. The role brought Patchornik to even wider international notice. She says she would be happy to work in Israel more often, but that there simply aren’t enough opportunities for her here. Judging by the way things are going for her right now, it could soon be more a matter of finding time in her bulging itinerary to slot us in.