Shlomo Gronich is an iconic Israeli musician. However, he was recently "canceled" for a derogatory remark made about Sephardi Jews. But the small audience at this concert clearly forgave him.

The show must go on, as we all know, but what happens when the artist has been “canceled”? The answer, in the case of Shlomo Gronich, is performances in smaller, more intimate settings, such as the one I attended on June 30. Jerusalemites Micki and Gaby Pell, a couple with huge hearts and a large garden, have been hosting small musical evenings at their home over the last year, in what started as an effort to help singers and musicians during the COVID closures when halls were closed.

Last week, however, they hosted a well-known Israeli artist in different circumstances. Gronich is a versatile singer, songwriter and composer whose influence can be felt from the genre of “Shirei Eretz Yisrael-Israeli songs,” to jazz, folk, rock and classical music. His project in 1993 with the Sheba Choir of young immigrants from Ethiopia was groundbreaking. He’s the sort of artist who is justifiably described as providing the soundtrack of Israeli life. It’s hard to imagine Israeli music without Gronich’s contributions.

Recently, however, Gronich had more infamy than fame after he quipped at the annual Ein Gev Music Festival that he was glad the audience was made up of “Ashkenazim” and that “there’s not a single chakhchakh here,” using a derogatory term for Sephardi Jews. It was a tasteless and stupid comment for which he apologized at the end of the performance. In the era before social media, it would have marred that show but not nearly ruined the 73-year-old artist’s lifework.

At the time, his family explained that he was suffering from the early stage of dementia, which meant he wasn’t always aware of what he was saying. At last week’s performance, Gronich played the piano brilliantly but occasionally confused the lyrics of some of his own songs, usually covering up with a quick, self-deprecatory joke, and starting the song again.

The 80-or-so people in the audience clearly forgave him. The crowd was mixed, comprising “Anglo” friends of the Pells, young musicians and local residents, Ashkenazi, Sephardi, Yemenite and those whose backgrounds are too mixed to define. The youngest person in the audience was the baby of a couple who had played a Gronich song at their wedding ceremony, and the oldest was probably around Gronich’s age, or a bit above. 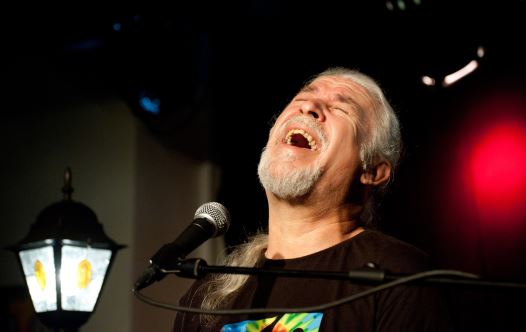 The elephant in the room

He addressed the elephant in the room (or garden) with a cheeky but apologetic song along the lines of: “I tried to make them laugh, and made a fool of myself.” It won a round of enthusiastic applause, but that wasn’t what the audience came to hear.

People came for the Gronich classics – and weren’t disappointed. Performing in private homes might be frustrating for Gronich, but the intimate setting suited his music and enabled him to encourage the audience to sing along with him. Not that we needed much encouragement.

Gronich delighted the fans with a range of compositions and songs from Bach’s “Ave Maria” to traditional Hebrew prayers, and took us from the lazy feel of “Nueba” in Sinai to the “Simpatia” for Tel Aviv, with its peeling paint and honking buses, throwing in some Beatles on the way, and the moving “Journey to Jerusalem.”

He was accompanied on the saxophone by the talented Amiram Granot, who doubled up as soundman, recording technician, driver and chaperone.

I left the evening feeling elevated by the music and the intimacy. It was a reminder that performers have to perform and the garden setting is good not only in times of pandemic.