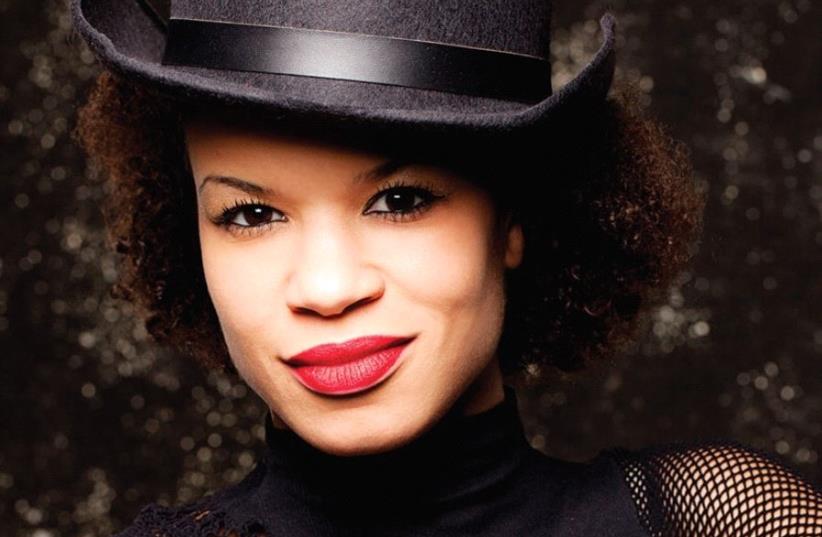 Sultry singer Nicolle Rochelle
(photo credit: JEAN MARIE MARION)
Advertisement
The Bard did say that “all the world’s a stage,” didn’t he? The next line in As You Like It reads thus: “And all the men and women merely players.” We may all be “merely” players, but some do the acting bit better than others.You could certainly place Nicolle Rochelle nearer the top of the thespian scale of excellence. The 36-year-old US-born French resident singer is one of the more animated performers to head our way in recent years. She is here now as part of the Hot Jazz series, to perform a program of numbers that feed off the material and, more importantly, the spirit of French divas of yesteryear Josephine Baker and Edith Piaf. The next show is at 9 p.m. tomorrow at Merkaz Habama Ganei Tikva in Tel Aviv, with more slots lined up between now and March 4 at Afula, the Jerusalem Theatre, Zappa Herzliya, Modi’in, Tel Aviv and Haifa.Chameleon-like would be a good epithet to attach to Rochelle, who will perform here with longtime artistic sparring partner French keyboardist Julien Brunetaud. They have a successful performing and recording synergy as Nikki & Jules. There will also be an Israeli threesome on stage during the Israeli tour, with flutist Ilan Salem, bassist Assaf Hakimi and drummer Shay Zelman completing the lineup.The singer has also done a number of acting roles and is adept at a broad swathe of dance styles.“It’s just like a change of personality, in a way, every single time,” she observes, shrugging off my suggestion that it might be confusing to dip into so many areas of the performing arts. “But everything seems related. For me, it is all a sort of passion, and I can relate to certain stories. I try to relate to each of them, whether it’s pop or jazz or blues. So for me, it seems kind of similar whether I am singing Piaf or Whitney Houston.”Rochelle’s earliest attempts at vocalizing took place in the 1980s when she was a youngster but old enough to get a handle on one of the biggest names in the female section of the pop industry of the day.“I remember trying to imitate Madonna when I was around five years old,” she recalls, “and then I tried to sing like Whitney Houston when I was about seven.”Naturally, there was other singing going on at the same time.“I was also taking singing lessons, and that was classical, soprano style,” Rochelle explains.“At the time I really wanted to sing like Whitney Houston, but the lessons really helped me in terms of technique and keeping my vocal health. That can help with all styles. I still use that soprano style in some jazz groups I perform with.”Rochelle has been based in Paris for seven years. It was the exotic and oft-skimpily attired figure of Baker, the expat African-American entertainer who was a star across Europe in the 1920s and 1930s, who drew her to the French capital.“I was doing the play Looking for Josephine in 2010, and I stayed in France because I had always loved French culture since I was 11. I had always wanted to sing in French and also do it in France,” she says.One thing led to another.“I stayed and found different groups to work with and different styles to sing in – styles I had never sung in the United States, like blues and [early jazz genre] boogie-woogie. I’d heard of them but never studied them,” she says.Considering that both are originally American art forms, the fact that the New Jersey-born artist got a handle on them in France smacks of more than just a little irony.“I’d never really come across a big demand for those styles,” Rochelle continues. “My father listened to 1950s music and folk music. When I started looking into Josephine Baker, that was jazz from the 1920s and 1930s, so I had to get into that.”Brunetaud helped Rochelle make her way along that particular learning curve.“I met him at a boogie-woogie festival, and he was very much into the blues – way more than I was. During our partnership as Nikki & Jules, he has brought so much blues into that. He got his education from his being obsessed with blues and boogiewoogie as a young French guy teaching me, an American,” Rochelle laughs.In Israel, the twosome will perform songs made famous by Baker and Piaf, plus some other jazzy material.Rochelle says that while she appreciates the celebrated cabaret singer, she prefers Baker’s style.“I got drawn to Josephine Baker straightway more than Piaf because I had more in the vocal style of Baker. She was a soprano and sang very high, in a pretty classical way. That inspired me because that was pretty much my training at the time,” she explains.Rochelle says she felt a strong affinity with Baker’s glamour and let-it-allhang- out mindset.“I was dancing and acting, and Baker did all of that and felt comfortable in her own skin, and I’ve also always been very comfortable in my own skin.”That is evident in Rochelle’s convincing performance in the role of Baker, in which she exposed more than just her soul.“In the puritan American approach, I never quite understood why they would think certain parts of the body would be shameful. So when I saw Josephine naked, that also inspired me. Pretty much everything about her inspired me, so I gravitated toward her style,” she says.Rochelle won’t be exposing too much of her skin here – comfort zone or no – but she will be wearing her heart on her sleeve and conveying some hefty emotion, no doubt in her usual irrepressible style.

For tickets and more information: (03) 573-3001 and www.hotjazz.co.il.
Advertisement
Subscribe for our daily newsletter