Joining the renowned Israeli director on location in Jerusalem during the filming of his latest movie. 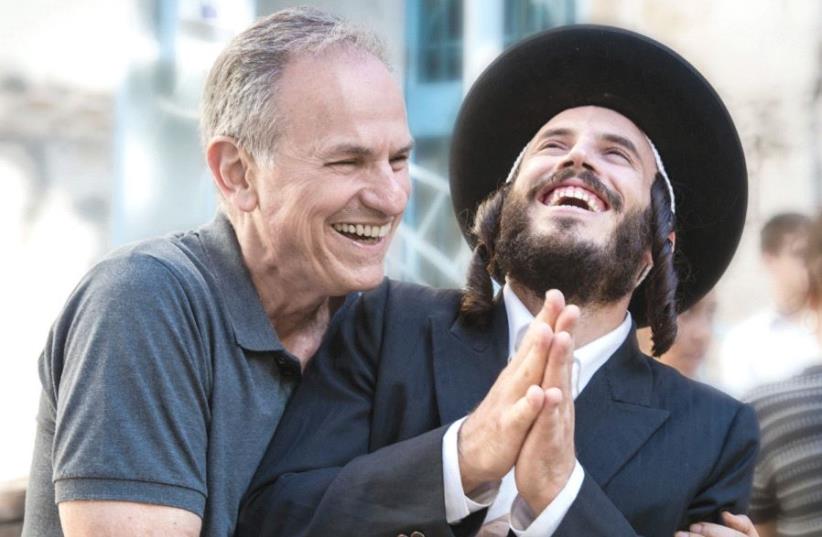 AVI NESHER appears with actors Natan Goshen and Joy Rieger on the set of his upcoming film ‘Pilgrim’
(photo credit: MICHAL FATTAL)
Advertisement
On a quiet street in the mostly religious Jerusalem neighborhood of Givat Mordechai one night last week, there was no sign that Avi Nesher was shooting a new movie anywhere nearby, until a guy with dreadlocks down to his waist pushed a dolly loaded with a concrete block into a yeshiva compound.I followed the dreadlocks guy onto the set and stayed until the wee hours watching the cast and crew shoot a scene from Pilgrim, Nesher’s third movie in a row set in Jerusalem, and the second part of a proposed trilogy.As I arrived, actress Maya Dagan burst into loud sobs as she faced a yeshiva cafeteria set up for a party to celebrate the engagement of her fictional daughter, played by Joy Rieger. Dagan and Rieger have acted for Nesher before, Dagan as the blonde bombshell with a tragic past in the 2010 film The Matchmaker, and Rieger as a young musician in Past Life, which was released last year in Israel to great critical acclaim and popular success, and which is now playing throughout the US.The complex screenplay for Pilgrim (a working title that may be changed) is based on a true story. It examines themes of estrangement, reconciliation and redemption through the lens of the religious/secular divide in modern Israel, a quintessentially Israeli look at universal themes. Rieger’s character is a young woman who has recently become ultra-Orthodox, much to the dismay of her secular, divorced parents, who reunite to discourage her from marrying her fiancé, a musician played by Natan Goshen. Goshen, a real-life music star who is making his film debut, has recently become observant in real life (although not ultra-Orthodox) and wrote eight original songs for the film.Yuval Segal, who starred in Eitan Green’s Indoors and who has appeared in many movies and television shows, among them Fauda and Zero Motivation, plays Rieger’s father, a psychologist who returns to Israel after many years in the US to talk his daughter out of her upcoming marriage. As he spends time in Jerusalem, he reconnects with his father, played by European Film Award Best Actor winner Sasson Gabai, who starred in The Band’s Visit. Segal’s character also gets involved in a custody battle between a man (Ma’ayan Bloom) who suspects his estranged wife (Avigail Harari) has joined a cult and may be endangering the life of their son.The scene I watched being filmed was the celebration of Rieger and Goshen’s characters’ engagement, which ends with a musical performance by Goshen. At two tables, men and women celebrating sat separately, and among the extras were some real ultra-Orthodox Jerusalemites. It was past 10 p.m. when I arrived and the cast and crew had been at work six hours already, but the energy level was high.As Dagan – now a brunette who I wouldn’t have recognized as the glamorous Clara in The Matchmaker – finished sobbing, Nesher hugged her. Talking about the character’s crying jag, which had an unexpected comic undertone, he noted, “Billy Wilder said, ‘Comedy is tragedy that happens to someone else.’” Next, he arranged the actors and the extras around each table, with Rieger and Dagan side by side at the women’s table, and Segal and Goshen at the men’s table.Rieger, Nesher’s latest discovery and Israel’s newest female star, sat inconspicuously, dressed in black from head to toe, biting her nails. Watching her fiancé as he sang a soft, sweet melody about spirituality that was also a love song for her, she kept turning nervously to gauge her skeptical mother’s reaction.Goshen cooled himself off with a flowered fan between takes – he was wearing a heavy black jacket – and Dagan gave Rieger a back rub. But as soon as the cameras rolled, they were right back in character. Goshen was particularly impressive, singing his song from start to finish seven or eight times. There were variations in every take, but he sang each time with great emotion, and I would have happily listened to the song a ninth time.After each shot, the crew worked like lightning to get ready for the next one. All Israeli movies are low budget by American standards, and on a film set, time is money, so people move fast. To insure that everything goes smoothly, Nesher has a trusted group of crew members he has worked with many times.Michel Abramowicz, the director of photography, who collaborated with him on his four previous films, conferred with Nesher after each shot, changing angles and moving actors and lights. Isaac Sehayek, an editor/ producer, is also part of the Pilgrim crew. Sehayek has worked with Nesher on almost all his movies, going back to The Troupe (Ha Lahaka), the 1978 classic that jump-started Nesher’s career.It was after 1 a.m. when I left, but the production wasn’t done for the night. As Nesher moved bottles on the table a fraction of an inch, checked camera placement with Abramowicz and spoke to his actors, he glided across the floor, quick as a cat in basketball sneakers.