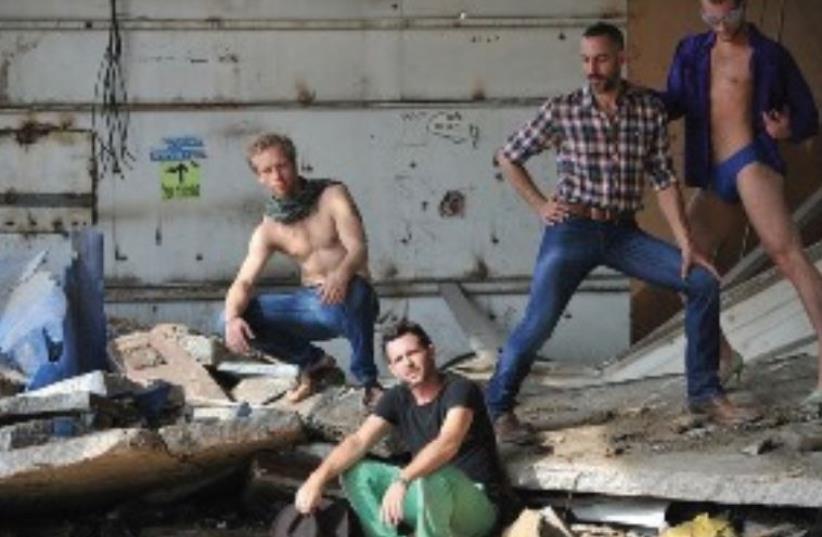 Niv Shenfeld and Oren Laor’s new dance 'Cowboy'
(photo credit: GADI DAGON)
Advertisement
Sitting on an AstroTurf-covered chair at the front of Noa Dar’s studio, about to witness a rehearsal of Niv Shenfeld and Oren Laor’s new work Cowboy, Chekhov’s gun came to mind.“One must never place a loaded rifle on the stage if it isn’t going to go off. It’s wrong to make promises you don’t mean to keep,” the Russian author wrote.Judging by the various props littering the blue floor, including ballet shoes, a plastic sword, knee pads and a live dog, it seems a lot is about to happen.Shenfeld and Laor, partners in life and work, will reveal Cowboy next week at Tmuna Theater. The work, which is performed by Shenfeld, Laor, Joel Bray and Gilad Jerushalmi, is the newest in a long line of pieces. Their previous works include Ship of Fools, Big Mouth and Post Martha.Most recently, Shenfeld and Laor took the international festival circuit by storm with their duet Two-Room Apartment.Cowboy, which is still subject to change, is as enjoyable as it is moving. Harnessing the energy of play, the four dancers explore various expressions of maleness and masculinity.“We really wanted to allow for freedom and playing to enter the work, not just in the studio but in the performance as well,” says Laor.“I think that art is the place where fantasy and reality meet,” adds Shenfeld. “This piece brings together a lot of different elements that we experience in life and work.”The process for Cowboy began many months ago, with an idea that was stuck in Laor’s head.“I saw Brokeback Mountain years ago, and it really stayed with me. It wasn’t so much a story about homosexuality for me as it was about missed opportunity and missing out,” he says.Laor, who hails from the theater world, didn’t know how but knew he wanted to draw on that notion in a future work.“We began working about eight months ago with a different cast,” explains Shenfeld.“Incidentally, that cast also included one Israeli and one foreigner. Somehow the foreignness became a part of the piece.”Those two dancers couldn’t continue the piece, so Shenfeld and Laor brought Bray and Jerushalmi into their Western world. “As a foreigner, Joel connected to a lot of the ideas we had already been working with,” says Laor.Throughout the 70-minute work, each flannel and denim-clad performer receives his own spotlight. Laor, the tallest and sturdiest of the pack, takes on a kind of bouncer/bodyguard role, carrying his peers on and off stage, organizing them and observing their actions from behind a ten-gallon hat. His presence evokes the best moments from Midnight Cowboy – surly, rough and tough with a hint of a smirk.Jerushalmi, the youngest of the four, shines brightly in this piece.He is the narrator, the diva and the loose cannon. Jerushalmi’s cowboy is cheeky, sexual and all over the place in the best way possible. To Jerushalmi’s Lolita, Bray brings unbridled honesty, exposing all parts of his body and soul. The Aussie of the pack, Bray lets the audience in on his real-life struggles here in Israel, being an outsider, a non-Jew, a non-citizen.Finally Shenfeld, whose role is the trickiest to pin down in words, brings humor and neurotics to the team. Skipping around in a pair of pink ballet slippers and gray men’s socks, expertly playing the flute, Shenfeld ties in a world all his own, one that is engaging, silly, moving and new.Together, the four make up a fabulously motley crew. Their group work is beautifully in sync.It is clear that the meeting has been meaningful for all and that there is a lot of respect and love among them.“It’s been very special to work with these men, being four queer, male performers,” says Bray. “I’ve never been in a process like this one before, and it’s been incredible.”

Cowboy will run at Tmuna Theater on August 27, 28 and 29. For more information, visit www.tmu-na.org.il.
Advertisement
Subscribe for our daily newsletter