Vazanna placed the dancers in pools of light at our feet, their bodies covered head to toe by some gooey material mixed with colored powder which flaked as it dried. 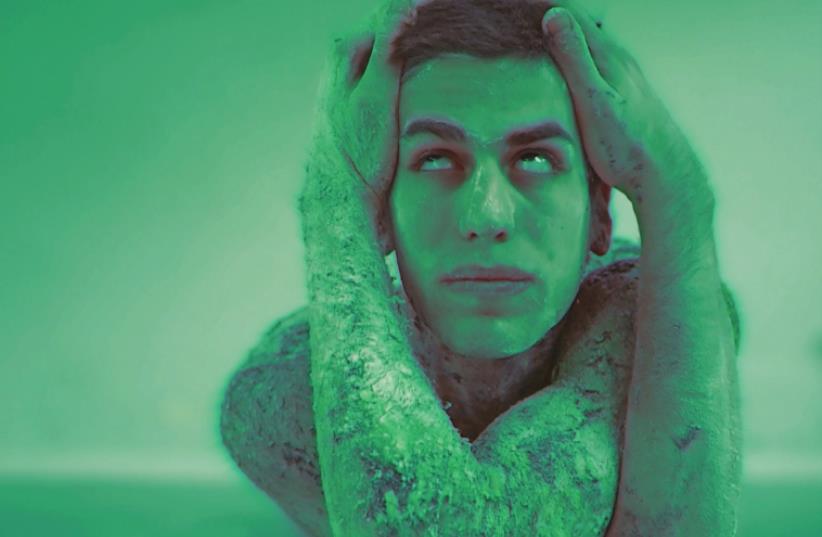 'Bodies'
(photo credit: IDAN GLIKZELIG)
Advertisement
Joining several of her choreographer colleagues, for her latest piece, Bodies, Sharon Vazanna recently chose to seat her audience right on stage, creating a more intimate environment with a greater measure of eye contact.Vazanna placed the dancers in pools of light at our feet, their bodies covered head to toe by some gooey material mixed with colored powder which flaked as it dried.In the opening scene they recline, exposed, and breathe heavily, looking like Stone Age creatures thrown up on the beach. They seemed to be wounded, moving and flexing their bodies but unable to move.Vazanna cooperated with visual artist Tomer Sapir, who is responsible for the dancers’ unique look. This second layer of skin which looked so alien has a powerful visual effect which in itself imposed new reflections on the dance. Obviously Vazanna encouraged the audience to consider the bodies’ sexuality, manipulation, objectification, attraction versus rejection and more, as natural forces. She uses an intriguing movement lexicon, taking into account the new viewing angle from the stage. Dancers Tamar Sonn, Nimrod Poles, Bar Gonen and Shira Ben-Uriel were utterly committed, with convincing showmanship.Their luscious and sensuous movement made for a slight contradiction to their ominous faces, rolled eyes and baring teeth. Later, they convulsed as if nearly vomiting; perhaps their manipulated skin had poisoned them.Eventually, the more they moved and slid, the faster they shed most of their skin. With a sharp twist of the creation’s mood, they danced a lovely samba to Brazilian popular tunes, forgot the remnants of mud in their hair and traces of color all over their bodies and enjoyed the relief. Perhaps this could have been a good time to stop the hallucinogenic journey into the subconscious, with a wink, but Vazanna ended Bodies with a duet which placed the female dancer in a role of a will-less rag doll on her man’s shoulders, as if to say: depressing as it is, nothing has really changed.In terms of structure or dramaturgical progression, the dance opened with all the ammunition it had, and left too little for later.BODIESSharon VazannaWarehouse 2, Jaffa Port, December 26