Dance your age away

For her latest project, veteran Israeli dancer Dalia Chaimsky performs with 28 participants between the ages of 80 and 101 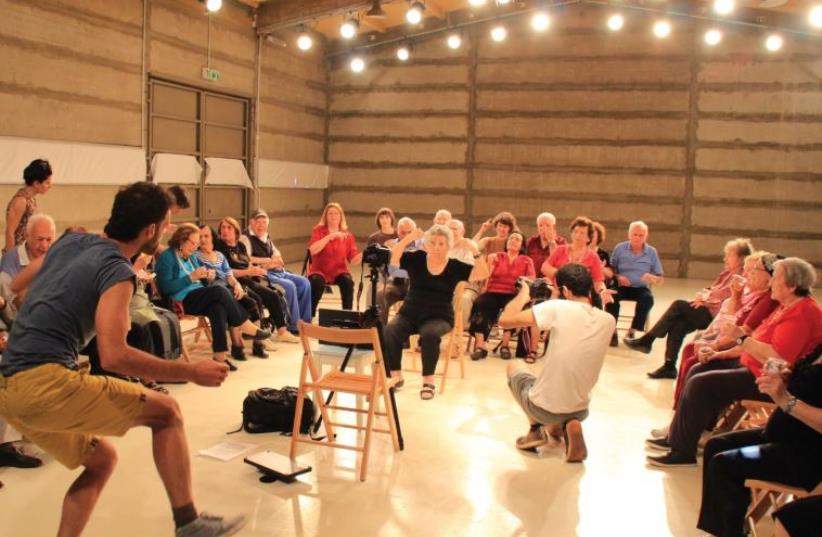 Senior Citizens together with professional dancers take part in the Ma’ase Gil project at the Kelim Choreography Center in Bat Yam
(photo credit: BOAZ SHAUL)
Advertisement
As the saying goes, age is just a number. But age can be described in many ways, in stories, in legacy and in offspring. As one part of the Ma’ase Gil (Enacting Age) project, founded and directed by veteran performer Dalia Chaimsky in collaboration with the Kelim Choreography Center in Bat Yam, 28 participants between the ages of 80 and 101 were asked to count from one to 100.As they went along, they called out associations with each number.“I got married when I was 16. I have 17 grandkids. I made aliya in ’48. 1949 was the year they took my baby,” recalled Chaimsky of the exercise. She discovered that while the young may slough off numbers, the elderly cherish and collect them.“Their memories tell the story of Israel, of the different aliyot [immigrations], of the wars and of the people.”On the day that we met, Chaimsky had just returned from the dress rehearsal of the culmination of Ma’ase Gil’s second annual cycle, two performances at Kelim entitled Tribe. Though Chaimsky is used to the stage, having performed for the past two decades in works by Yasmeen Godder among others, Ma’ase Gil has pushed her to new extremes. The project, which was initiated nearly three years ago, is part of a broader line at Kelim: art in the community.In addition to organizing the event, Chaimsky and her co-choreographers Shira Eviatar, Laura Kirshenbaum and Yuli Kovbasnian will perform together with the 28 participants.Chaimsky arrived to Café Lizolette in central Tel Aviv charged, if not a hair frazzled.“It was a hectic day. This meeting is as important to me.... The show is a celebration of the project, of our joy in being together, which was so significant for all of us.”The group met once a week for the past year at the Lustiger Day Center in Bat Yam.As part of Social Security benefits, the participants could choose between spending two days a week at the center or having an aide at their homes. The group was comprised of those that opted to come to the center, specifically on Wednesday mornings.“Our cast was put together by chance. As the project went on, we got to know each...of them well and they got to know one another,” said Chaimsky.They opened each session with a series of movements.“It is a simple movement ritual that we do together. At the beginning we taught them movements, but as we went on we took more and more movements from them and it became theirs,” said Chaimsky.Listening to the group and honoring their needs and requests and wishes was at the heart of Chaimsky’s initiative.“We didn’t want to choreograph a dance for these people. We embarked upon a very slow process; we listened to what they wanted. A lot of times we took daily movements and turned them into dance.”“A big part of the process for all of us was listening to one another’s stories. There is one woman, Yehudit, whose baby was taken from her in the hospital. A lot of us had never heard about such things and it was really shocking.”For many, dance had played a role in life before old age set in. Mazal, who is 80, dreamed as a young woman to perform with Inbal Dance Theater but was told she was too short. Ma’ase Gil gave her an opportunity to close the circle, explained Chaimsky.Beyond the joy of moving and the sense of community, Ma’ase Gil contains a deeper, more political message.“We push the elderly aside in our society.They get to a certain age and we tell them, ‘That’s it. You’re done. You have nothing left to contribute,’ and we forget about them. As lifespan increases, the elderly become a bigger part of our demographic and they shouldn’t be ignored. Executing these tasks, even if simple, brought them to life. It gave them physical, mental and emotional strength. And I saw that they felt proud to be there.”

Ma’ase Gil will perform at the Kelim Choreography Center in Bat Yam today at 6:45 p.m.
For more information, visit www.kelim.org.il.