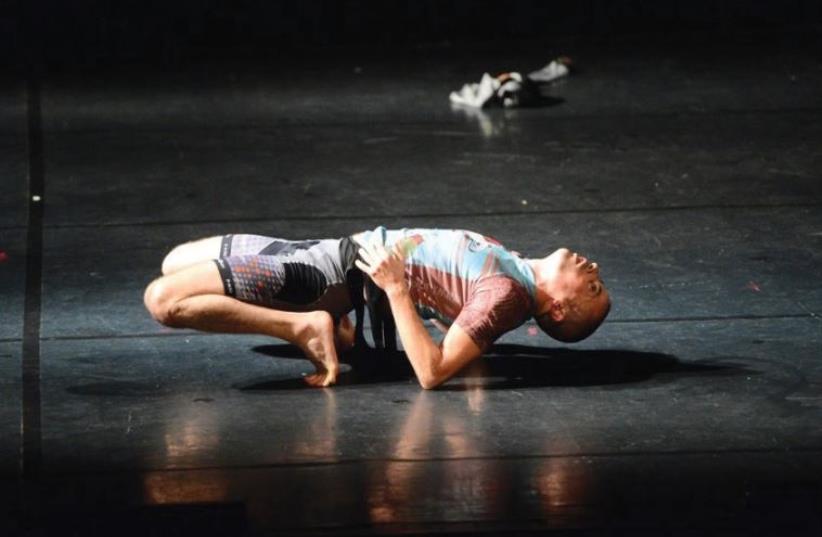 WHALE OF a tale: Choreographer and dancer Oded Ronen performs in ‘Whale Dream.’
(photo credit: REBECCA KOWALSKI)
Advertisement
Have you ever heard someone claim to be capable of unihemispheric slow-wave sleep? It would sound like this: “I sleep with one eye open.” However absurd it may sound, for various evolutionary reasons many species in fact sleep with half of their brain while the other half remains alert. This fact, particularly in regard to whales, struck a chord deep within dancer and choreographer Oded Ronen.“I am fascinated by, maybe obsessed with, the duality of fantasy and responsibility,” says Ronen. His crystal- blue eyes blaze as he speaks of this phenomenon. “Not just in dance but in life. When I am flying, dancing, it’s because I’ve been responsible with the physics of my body and the space. There is great ecstasy in that feeling.”Ronen, 36, will perform Whale Dream this weekend at Jaffa’s Warehouse 2 as part of the debut performance of his troupe Humans In Motion or HIM, a joint venture with life and work partner, Australian dancer and choreographer Joel Bray.The show will consist of three works, Whale Dream, the solo Pannacotta, choreographed and performed by Bray, and the group work Rainbow Gravity. The final piece, a quartet choreographed by Ronen and danced by Bray, Tal Benari, Ligal Melamed and Lola Irgo, was originally created for the Jerusalem Ballet.In Pannacotta, Bray finds the most complicated recipe imaginable and attempts to execute it. While channeling a 1950s housewife, he engages in the question of motivation: why do we cook for others? Is it really for someone else or for our own pleasure? Rainbow Gravity is named after a theory that disproves the Big Bang Theory.According to rainbow gravity, the universe has no beginning or end.“We worked with the poet Ido Angel, whose four poems create the score for the work. They are a succession of stories from life to death, it is a fantastical life, a short one that is comprised of flickers of images,” explains Ronen.Whale Dream, which premiered as part of the Fresco Dance Company’s Dancers Create evening, is another example of the ways in which life, particularly science, inspire Ronen. As Ronen begins the solo, lying on the floor, a voiceover informs the audience about how whales rise to the surface of the ocean while asleep to breathe.“I see it as a kind of responsible hallucination. They are resting and yet they are completely aware of their surroundings, of predators, of the need to eat and breathe.”To make the solo, Ronen engaged in a practice that he has developed over the past five years.“IM, or Imagery in Motion, is a type of guided imagery that allows dancers to cancel out the physical instruction phase of dancing. It creates a bridge between fantasy and physics. It’s like in bungee jumping; you can be completely free because you know the exact length of the chord. I think of IM as a way of taking the responsible, dangerous path. It allows us to reach a level of execution that is bigger, higher, faster than we think we are capable of while being fully integrated emotionally and physically. With IM, the dancer moves from a very emotional place.”A major part of the IM methodology is to connect to the animal inside each person.“I see the reality as being me the animal, my body, my breath and so on. The fantasy is me the person,” adds Ronen. In Whale Dream, one can clearly observe Ronen playing between his animal and human selves.On the day that we met, Bray was on tour in New Zealand, performing in Anouk Van Dijk’s Complexity of Belonging. Jet-setting, both together and apart, has become a regular part of their annual calendar.The two met in 2006 as dancers in the CeDeCe Company in Portugal.It was there that they fell in love and decided to move back to Ronen’s native Israel. As an Australian citizen and a non-Jew, receiving status in Israel was an uphill and continuous battle. The two spent three seasons working for Amir Kolben in Jerusalem before moving on to Yoram Karmi’s Fresco Dance Company.Upon leaving the company, Ronen put his energies toward choreography while Bray found himself back in Australia, dancing with internationally renowned troupes such as Chunky Move. Bray can currently be seen in Niv Shenfeld and Oren Laor’s Cowboy. Last year, the duo received an invitation to join Israel’s choreographic elite in the Choreographer’s Association, a significant step toward the dream of sustaining a dance company.“Joel and I will celebrate 10 years living and working together this August,” smiles Ronen. “We are very different.We work together very intensively, we are always present in one another’s process, we support one another and push one another. We bail each other out of tough spots and call one another out when we’re slacking. Our artistic dialogue is very intense, which helps to distill the ideas to their purest form. I think that you can tell the difference between pieces that are mine and his and I don’t think that’s something we want to change.”The name of the performance, Ronen explains, touches on an essential element of their philosophy.“All three of these works have some kind of this duality in them, living in peace together, like a hybrid car. It’s possible to be asleep and alert, to make the most delicious and difficult recipe for yourself and for a loved one, to have dreams and be responsible, to sustain a dance company in Israel and still create in Australia.”‘Hybrid’ will take place at Jaffa’s Warehouse 2 on Friday, March 25 at 3 p.m. For more info visit www.choreographers.org.il.