Dining: A concert of flavors at Oratorio

The Oratorio restaurant in Zichron Ya’acov resonates with good taste. 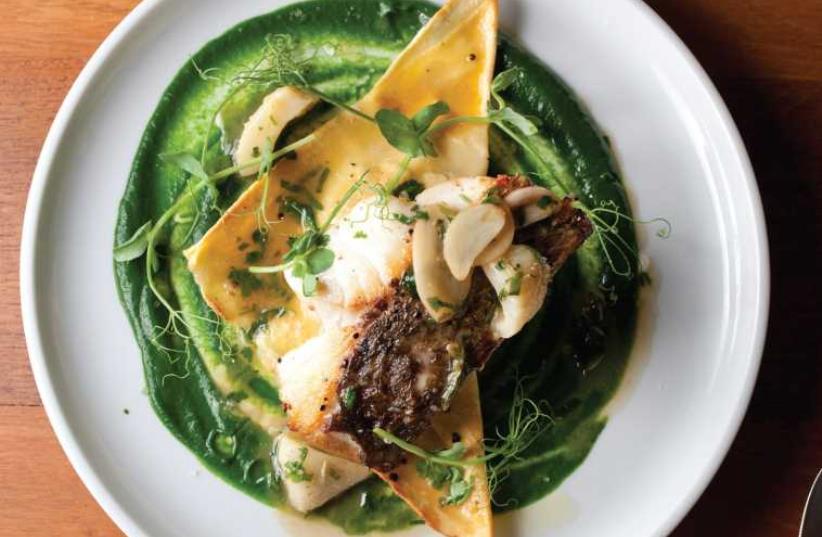 The Oratorio restaurant in Zichron Ya’acov
(photo credit: PR)
Advertisement
The recently opened Elma Arts Complex in Zichron Ya’acov is a fine example of how, with imagination and enthusiasm, a white elephant can be turned into something positive, useful and just plain beautiful. Generations of Kupat Holim workers used to holiday in the iconic building designed by Ya’akov Rechter, built at the end of the 1960s on the hills of Zichron, overlooking the Mediterranean. It was a landmark that could be seen for miles around and a great place for family holidays.The place fell into disuse and might have remained so, or even have been demolished, but for the foresight and perseverance of Lily Elstein, a Zichron resident and daughter of early pioneers. She decided to purchase it and turn it into a luxury hotel. Many years of work and vision have transformed the old place into an arts complex, with galleries, concert hall and several restaurants. Overall responsibility for the four eateries is in the hands of chef Boaz Dror, who made his mark in the Royal Beach Eilat and other prestigious eateries. It seems to have been carved out of what was the old canteen, which holds many happy memories for me and my family.The views from the Oratorio restaurant and the outside balcony are other-worldly, especially if you arrive as the sun is setting. The menu is based on local flavors and products such as olive oil, herbs, fresh fish swimming in the nearby ponds and home-grown meat. Ohad Levi is the chef presiding over the Oratorio.First of all, I liked the fact that the menu was short – just a few choices in each section so that ordering a meal was much less of a hassle than when confronted with dozens of options. Four starters were offered, all under the heading “From the Farm,” – i.e., vegetable-based: artichokes, asparagus and two salads.There were five meat choices, three pasta and six fish dishes. There were four specials on the week I visited, which presumably change all the time.My opening choice of sardines filled with green bread (NIS 44) sounded intriguing and was certainly original. It consisted of three small fish with a bright green stuffing, dipped in crumbs and fried. I found the filling a touch stodgy but liked all the accompaniments – spicy salsa, mint, dill and red onion rings. My dining companion fared better with artichoke barigoule (NIS 48), generous chunks of fresh artichoke hearts swimming in a garlicky white wine sauce.In fact, garlic seems to be the chef’s favorite flavoring, as it appeared in every dish. We consumed copious amounts of the tantalizing herb, well cooked and hopefully having its pungent after-effects emasculated.For the main course, I chose drum fish fillet on a fire-roasted potato ravioli (NIS 112). This was very good.A crispy piece of tasty fresh fish perched on a giant triangular ravioli (or raviolo, as there was only one) flavored with plenty of garlic. My companion enjoyed his dish of lamb chops (NIS 148) – four meaty cutlets served with a rice-stuffed cabbage leaf. Pine nuts were added to the garlic for this dish. We also ordered a green salad (NIS 42), which had the usual leaves plus endive, very crispy with a subtle vinaigrette that didn’t overpower the salad.Desserts consisted of a bowl of fruit salad with berries and three kinds of sorbet, all excellent; and a plate of petits fours, which gave a taste of chocolate, almonds, fruit and cream – all as good as they were esthetic.The restaurant has a fine collection of wines as one would expect in Zichron Ya’acov. We sampled two – Dalton Fumé Blanc (a dry refreshing white wine) at the start of the meal and Resin Recanati, 2012, a rich velvety red wine throughout the rest of the meal (NIS 179 a bottle but available in a carafe or by the glass – NIS 39).To turn what was a Kupat Holim canteen into an upmarket restaurant by just changing the décor is quite an achievement. Now perhaps the owners could concentrate on correcting some of the howlers on the English-language wine list (e.g.,”dinners” for “diners”), and the place would be near perfect.
The writer was a guest of the restaurant.