Aluma in the capital is classy, comfortable and kosher. 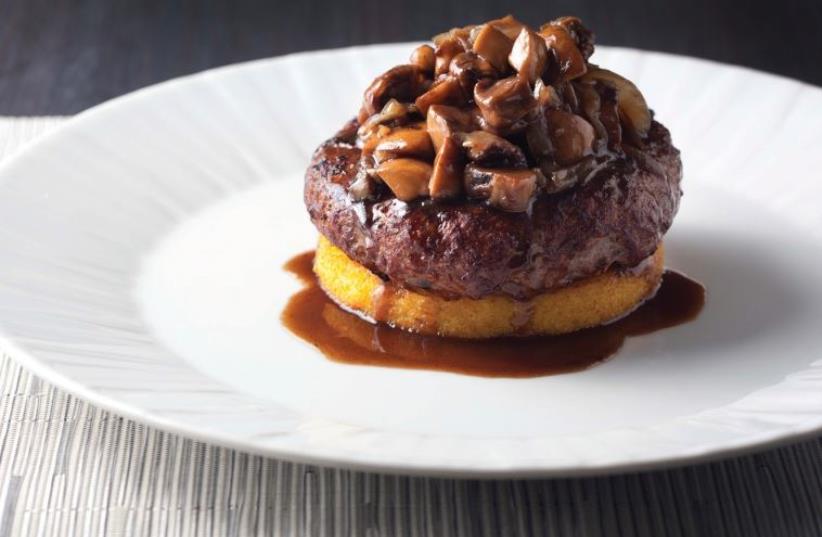 Aluma restaurant
(photo credit: PR)
Advertisement
A longtime staple on the Jerusalem culinary scene, the Kohinoor Indian restaurant at the venerable Crowne Plaza Hotel is no more. Over the last few months, more than NIS 3 million has been invested in transforming the 200-meter space into Aluma, an elegantly comfortable kosher chef’s restaurant that opened its doors just before Passover.Upscale but warm and welcoming, the 180-seat venue is hoping to establish itself as the go-to restaurant for those that seek strict kashrut standards but want a gourmet experience.To achieve that goal, chef Michael Katz was recruited from his home at the Haba Trattoria in the Mahaneh Yehuda market to create a sumptuous meat and fish-laden menu at Aluma (under the Mahfout hechsher).Katz, who has trained in Michelin-star restaurants, taught at Cordon Bleu in London and is a member of the Belgian association of Master Chefs, has applied the same care, attention to detail and expertise that he invested for three years in Haba’s dairy menu to Aluma’s array of appealing creations.The chef sees his mission of providing world-class cuisine within the parameters of kashrut as more of a challenge than a restriction. A recent sampling of some of his dishes confirmed that he not only met the challenge but surpassed expectations of what can be accomplished with inspired recipes, creativity and finesse.Katz and his staff, which includes Australian-born chef Scott Charles, experimented with ingredients and recipes until they were satisfied that their fare wasn’t “great for kosher food” but simply “great.”All the dishes were a sight to behold, with Katz focusing on the visual appeal, not just the taste quotient. Some of the items were so dazzling to look at, that it was almost a shame to dig into them.Almost….Our repast, selected by Katz, began with the fish soup (NIS 42), described on the menu as bouillabaisse style, with a touch of coconut cream. The thick orange broth, stocked generously with chunks of salmon and drumfish, was delicious, with the coconut tinge adding a Thai element.That was followed by crusted tuna roll (NIS 46), a tasty variation on sushi, with lettuce used instead of seaweed. The delicate breading complemented the fresh, supple tuna, which was served with a cucumber and tapioca mint salad and wasabi cream.Another starter was the cured trout Gravlax style, with beetroot and light horseradish cream (NIS 42) – Gravlax being the Nordic style of curing raw fish in salt and sugar. With a texture and taste like salmon without the smoky element, the dish was a delight, and the cream added a bright tang.The final starter brought our way was a Middle Eastern treat, the warm sabich salad (NIS 38). It consisted of roasted eggplant, tomatoes, chickpeas, tahini, harissa and a crispy poached egg that our server pierced at the table, releasing the yolk. The rich blend of tastes made this a highlight. But for those with a limited appetite, be warned that this is a filling dish.And it would be a shame to miss out on the main dishes. Katz suggested the crusted salmon with shallots, red wine sauce and sautéed mushrooms (NIS 98) – a tribute to his mentor, Belgian chef Attilo Basso. The medallions of succulent salmon were wrapped in delicate phyllo pastry. A forkful combined with the wine-soaked mushrooms was more than satisfying – subtle and not overpowering – and the rest of the forkfuls went down just as easily.Our other main dish was grilled entrecote with confit of garlic Hollandaise, crisp potatoes and green beans (NIS 138). Katz explained that in order to prepare the kosher meat in the optimal manner that results in a tender, juicy cut, he heats it on a very low heat for 13 hours before grilling it for a few minutes.The reverse searing method worked marvelously, as the sliced steak was soft and flavorful. The oversized fries and the string beans were adequate, but one would have hoped the steak had been accompanied by more adventurous side dishes.The array of desserts was impressive, with selections like tapioca in a mango cream with wild fruit marmalade, carmelized pistachios and apricot foam (NIS 36) or crepes Madeline – thin crepes filled with orange zest cream (NIS 42). But we went with our hearts and chose the chocoholic’s only possibility – the chocolate and espresso mousse served with cocoa crumble, wild berry marmalade and chocolate sorbet (NIS 36). It tasted as good as it sounds, without being too heavy or overwhelming. Almost as refreshing was the apple in salted caramel with banana and acai sorbet (NIS 38), a terrific variation on apple pie.Aluma also has an extensive wine and mixed drink menu from the amply stocked bar, as well as wonderful espresso to end the meal.Chef Katz has succeeded in his quest to create a kosher dining experience that doesn’t skimp on taste, presentation or quality.Aluma can join the ranks of topquality kosher establishments that the capital can be proud to call its own.

The writer was a guest of the restaurant.Aluma
Kosher
Crowne Plaza Hotel
1 Ha’aliya Street, Jerusalem
Tel: (02) 643-7555Sunday to Thursday, noon until last customer;
Friday, 11 a.m. to two hours before Shabbat
; Saturday, one hour after Shabbat
Advertisement
Subscribe for our daily newsletter