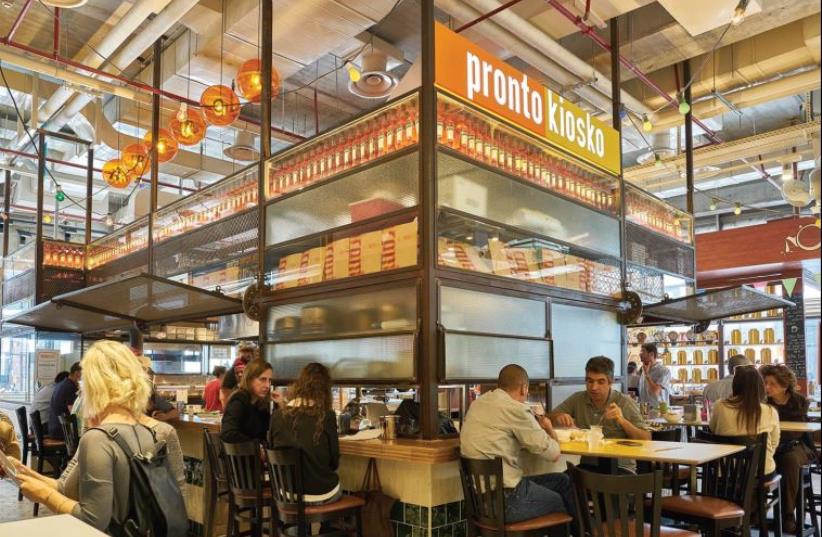 Pronto Kiosko
(photo credit: PR)
Advertisement
Following their success with Shuk Hanamal – the covered food market at the Tel Aviv Port – the entrepreneurial duo of culinary journalist Michal Ansky and architect Ro’ee Hemed have teamed up again to launch Shuk Tzafon, an upscale food mall in the northwestern Tel Aviv neighborhood of Ramat Hahayal.Comprising more than two dozen establishments, including food stalls, boutiques and specialty stores, Shuk Tzafon has also attracted two of Tel Aviv’s leading chefs to open outposts of their highly acclaimed restaurants in the new location.Chef David Frenkel may not be as well known to the public as some of his celebrity colleagues, but those who are familiar with his restaurants – Pronto and Zou Bisou – know that he is in the same league as the best of them.What Pronto has done for Italian cuisine in the fine dining category, Frenkel now plans to do for casual dining with Pronto Kiosko.Pronto Kiosko is dedicated to two foods Frenkel is obviously passionate about: pizza and pasta.The pizzas that emerge from the oven specially imported Italy are works of art, with lakes of melted cheese created by generous lumps of the freshest mozzarella cheese; none of the grated processed substitutes to which we are all too frequently subjected.The restaurant’s superior quality mozzarella is also delicious in the Caprese salad, along with cherry tomatoes and fresh basil leaves in a delicate balsamic dressing. This light salad is the ideal foil for the carb-heavy pizzas and pasta dishes.Interestingly, one of the gourmet pizzas contains no mozzarella at all. The mushroom pizza with black truffles features a rich Bechamel sauce and Parmigiano cheese on Pronto Kiosko’s trademark superb thin crust with appetizing puffed edges.Although the pasta menu (like the pizza menu) is not extensive, there are enough selections to make choosing difficult. We followed the waiter’s suggestions and had the Mafaldine chicken aglio e olio and the lamb tortellini.The former was radiator-shaped pasta with roasted white meat chicken in an olive oil and garlic sauce with tomatoes and chili. This dish was a bit spicier than you might expect from a pasta course, but we found it had just the right amount of heat.The tortellini, on the other hand, came in a basic Neapolitan sauce flavored with eggplant and kale and were filled with a lamb ragout that melted in the mouth.There were also vegan and gluten-free options, such as a delectable calzone filled with sweet potato and onion in a green salsa.Pronto Kiosko also has a house cocktail: an Aperol spritz – the Italian fruit liqueur with lime and tonic, creating a refreshing summer drink.Desserts were exactly what they should be – light and sweet. The mango panna cotta was made from a combination of sweet cream and yogurt, topped with a layer of mango gel, while the strawberry tiramisu was a nice variation on the traditional Italian confection.Shuk Tzafon also succeeded in luring no less a luminary than chef Yuval Ben-Neriah of the upscale Asian restaurant Taizu. His iteration is Miazaki, a sleek and attractive food stall that serves Japanese street food.The centerpiece of the kitchen is the imported Robata grill, an impressive double-decker contraption that is fired with Japanese oak charcoal, which imparts a distinctive smoky flavor to the foods cooked on bamboo skewers. Hence Miazaki’s slogan: Food on Fire.The skewers here covered all the bases: fish, meat, chicken and vegetarian (tofu). The meat category was represented by chicken livers, which emerged from the unique grill with the silky texture of a pâté. The skewer was accompanied by steamed white rice seasoned with furikake, a piquant sesame-seaweed mixture; homemade pickles; tasty steamed buns; and a lettuce salad dressed with a pleasant green apple, ginger and yuzu vinaigrette.Additional sides may include toro salmon, an extraordinary mélange of roasted salmon belly, cucumber salad, wakame seaweed and – surprise! – mascarpone cheese, brought together like a symphony with a touch of ponzu sauce; and roasted beets, large slices of the red root vegetable basted with a sweet and tangy honey-miso sauce, accented with nori seaweed and roasted almonds for a welcome bit of crunch.The largest section of the menu was devoted to ramen, a veritable meal in a bowl. Of the five ramen dishes, we had the spicy miso: thin wheat noodles in a colorful soup of red miso, chili paste, green onion, baby corn and roasted sesame. Two halves of an ash-cured egg floated in the bowl, while a skewer of spring chicken lay across the top, the chunks meant to be dunked in the soup. The complex fusion of flavors was truly magnificent.Miazaki sells upmarket beers and wine and offers one specialty Shochu-based cocktail, redolent with ginger, that was particularly bracing.There were three desserts on the menu, two of which were unavailable the day I visited. The yuzu tart was an enjoyable sweet and tangy custard in a black sesame crust.Both Pronto Kiosko and Miazaki have English menus and are open the same hours as Shuk Tzafon (seven days a week from noon to 11 p.m., except Fridays, when it closes at 6 p.m.).