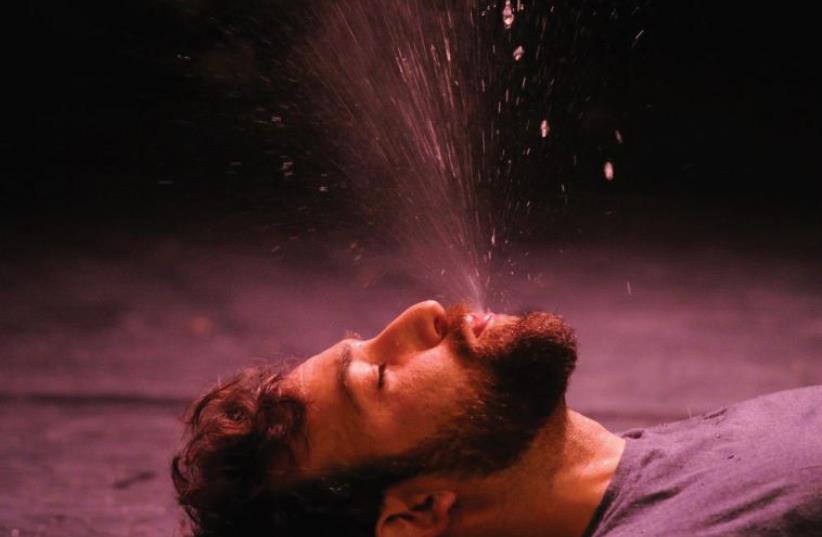 The Fringe Theater Festival
(photo credit: PR)
Advertisement
Borders mean all sorts of things to all sorts of people in various cultural milieus. Take, for example, the British. Standing in line, say, at a supermarket checkout or at an ATM in the UK is a far more relaxing experience than in this beloved Mediterranean country of ours. The Brits know how to keep their distance – for good or bad. We Israelis, on the other hand, often tend to view demarcation lines as an invitation to explore what lies on the other side. Hence, borders become an important and often all too central element of political and sociopolitical life here. All of which makes Ofir Ben-Shimon and Merav Dagan’s play Zeh Kol Hazman Boreach Li (I Can’t Hold It) an intriguing venture in artistic and philosophical terms.Ben-Shimon and Dagan, who are partners on stage and in life, will present the show at this year’s International Fringe Theater Festival, which will take place in Acre between September 27 and October 1. As usual, the festival, which has reached the venerable age of 36, will present the public with works that pertain to the left field of artistic enterprise, with plenty of drama, comedy, visual extravaganzas and downright oddball stuff.Borders come in all shapes and sizes. Until the advent of the current refugee crisis, many Western European countries did not set too much store with the matter of where their sovereign territory ended and where the neighbors’ began. Recently, however, Hungary has put up some fearsome-looking barbed war to keep the mostly Syrian refugees at bay, while Denmark closed a highway to keep them out.It was the issue of frontiers that got Ben-Shimon and Dagan thinking a year or so ago when they put on a more compact version of Zeh Kol Hazman Boreach Li at a festival at Tmuna Theater in Tel Aviv.“There was a call for proposals for the Acre festival, and the central theme of the Tmuna festival was occupation,” recalls Dagan. “We started thinking about how we mark out territory and why we have the need to do that.”Ben-Shimon and Dagan were not going to nip down to the hardware store to pick up a few reels of barbed wire, nor were they into flag-waving or erecting a security fence. They opted for a more readily accessible and constantly available element.“We went for something natural – urinating,” says Dagan.Anyone who has ever owned a dog or a cat will know that, indeed, it is the most natural way of staking a claim to a particular area of land.“We all do that, but it is also an action that can be violent; and there is the gender difference, where a woman has to get down on her haunches, while a man can do it standing up.”So there are boundaries after all.“There are borders between what is acceptable and what is not acceptable, “continues Dagan, “and between inside and outside.And, of course, it is an action that takes on a new perspective when it takes place in the public domain.”The latter is an area that the couple explored thoroughly. The largely visual, non-verbal Zeh Kol Hazman Boreach Li opens with a video of the two individually emptying their bladders in all sorts of unexpected, and generally inappropriate, places.“I urinated next to a café when there were people inside,” says Ben-Shimon. “My father filmed it.”That sounds like it may have put a few noses out of joint, not to mention putting the café patrons off their espresso and croissant.Ben-Shimon could have got himself summarily arrested and hauled off to the local cop shop. In fact, the incident passed – for want of a better word – without an appearance from the boys and girls in blue.“You know, it’s a funny thing,” observes Dagan. “If you urinate in a public place and someone films you, it becomes an artistic cultural thing, and people are generally okay with that.”Zeh Kol Hazman Boreach Li is not just about matters of a urinary nature. The central border element runs through the work in all sorts of guises.“It is about a couple, us, and the dynamics between us,” explains Ben-Shimon. “The boundaries between us and our actions are constantly shifting. It is a fascinating dynamic process.”Sounds very much like life itself.“We build a dwelling on the stage, so you have the thing of outside and inside, and also where our territory ends and the public space begins,” he says.So it is not so much the action, per se, that matters but how and where it is performed.“We look at the boundary between what is natural and hooliganism,” says Dagan. “That is sometimes a very fine line.”Presumably it is also a subjective matter. Each of us will naturally bring our own personal cultural background to any work of art. The Brits, for example, have a long tradition of lavatory humor, while someone from, say, Italy might consider a joke that has bodily emissions in the punch line as downright vulgar.Ben-Shimon and Dagan are willing to run that risk. “People might walk out in the middle, and that is their prerogative,” says Ben-Shimon. “We try to engage the audience as much as possible.” Rest assured that it does not involve the dispensing of bodily fluids up close to the spectators.Interestingly, Ben-Shimon and Dagan hail from very different areas of the arts. Zeh Kol Hazman Boreach Li marks filmmaker Ben- Shimon’s first foray onto the stage, while Dagan is a professional dancer. The couple’s individual training and disciplines also come into play in the performance. The Acre festival patrons will have several opportunities to get a handle on Ben-Shimon and Dagan’s largely fluid approach to borders with the hour-long work due to be performed no less than 10 times between September 28 and October 1.Elsewhere in the festival program there are shows by troupes from the Czech Republic, the United States, Holland, Macedonia and Britain, in addition to the best of our own homegrown fringe theater fruits.For tickets and more information: (04) 838-4777; www.accofestival.co.il and www. http://barak-tickets.co.il