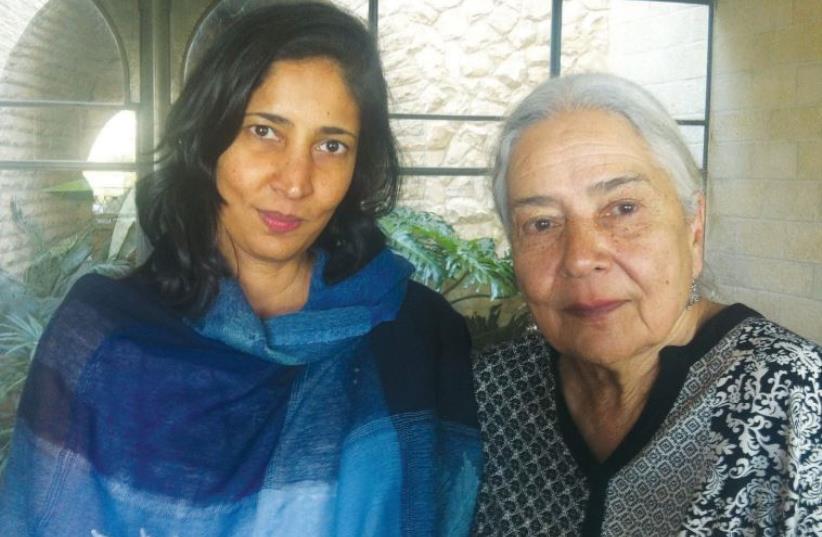 Kiran (LEFT) and Anita Desai are writers in residence at Mishkenot Sha’anim in Jerusalem for the month of May.
(photo credit: LAURA KELLY)
Advertisement
Anita and Kiran Desai are tired. The international award-winning Indian novelists – who are also mother and daughter – had just finished a marathon tour of Yad Vashem and returned to Mishkenot Sha’anim in Jerusalem just in time for the kitchen to close; it’s Remembrance Day eve.“We are just getting a collage of impressions,” says Anita, 78, summarizing both her and her daughter’s first trips to Israel. Kiran, 44, adds, “We’ve been here a few days and it’s such a complex place.”The women are spending three weeks as “writers in residence” at Mishkenot Sha’ananim as part of the Rothschild Foundation’s Marie Residency program, a tribute to the life of Italian artist and glass sculptor Marie Brandolini, who died in 2013 at age 51.The program – in the spirit of Brandolini’s love and appreciation for literature – brings accomplished writers to both Venice and Jerusalem, two special cities in the deceased artist’s life.“Marie made her home in Venice but visited Jerusalem and appreciated its importance to her and her family,” Moti Schwartz, director of Mishkeont Sha’anim, wrote via email.“It is also part of my goal to re-launch the Mishkenot legendary residency program that used to host here writers, musicians and artists like Saul Bellow, Isaac Stern, Amos Oz, Nicole Krauss and more.”The Desais will also be participating in the Jerusalem Writer’s Festival that runs from May 25-28. They will participate in two events, the first on May 25 speaking with Israeli novelist Zeruya Shalev on “literary family dynasties, the link between personal writing and national writing and relationship between love and pain,” and the second, a “living room session,” the following day at the T’mol Shilshom cafe in Jerusalem, where they will take questions from the audience.Among her many accolades, Kiran is the recipient of the 2006 Man Booker Prize for her novel The Inheritance of Loss, which explores the impact of British colonization in India on a medley of characters, to the backdrop of their own motivations, struggles and triumphs.Likewise, Anita is the author of over a dozen books, and has received almost just as many awards. The two women, both born in India and living in the US, are most revered for their weaving of memory, loss, longing and immigration.“Certainly in India and over here, I imagine,” Anita says, “perhaps you need that sense of the past... the need to explore that to arrive at your particular point in time, particular scene.”For their first time in Jerusalem and Israel in general, they said their only research was reading the greats of Israeli literature, like David Grossman, Amos Oz and Aharon Appelfeld.“They write from the point of view of settlement in Israel,” Anita says. “[They have] written from the inside and from an understanding of what it means to be an Israeli.”While waiting for the last meal from the kitchen to be delivered before the siren sounded for Remembrance Day, the women answered questions about life in the literary field, writing clichés and how to truly measure success.Anita, sometimes we hear that parents who work in the arts discourage their children from following in the same path. Did this happen between you two?
Anita: There was never a plan or discussion about it...Kiran is the youngest and we lived in a house full of books... Kiran is the only one who read widely, deeply and began to write on her own. There was no discussion of it.Kiran: It happened quite naturally, I was in college and took a class and loved it. I wrote some stories... it was the only thing that worked out, it was not like I had another option. It was a story that got me into graduate school. There was always a story that was accepted, the doors always opened in this one sphere. I was also always extremely happy writing. The rhythm of the writing life was very easy for me. I didn’t have to fight to create that habit, to deal with that sense of discipline; something about it was familiar to me. How you get up in the morning and go to your desk stubbornly every day.Anita: You already knew what the writing life would be, watching me.

Kiran: You must have been worried because it is a hard life.Would you encourage young writers to pursue this path?
Kiran: Now that I’m teaching at colleges or I am a writer in residence, I always encourage them because I think that’s my role. To encourage them that they have to fight very hard, half of it is a psychological fight to keep your spirits up, encourage them and warn them at the same time.Anita: To begin with, when you’re starting off, and you’re not really sure of yourself and you haven’t yet received any encouragement, it’s very hard to keep your belief in your writing alive.Kiran: Sometimes that happens with the second or third book.Anita: There are bound to be rejections along the way. Only someone who is utterly committed to the writing life should take it on.Do you have any ‘most hated writing cliches’?
Kiran: I can think of one: ‘Write what you know’ – I never could understand that one.I think it’s from what I don’t know that I begin to work, or from what people don’t say or what is not spoken aloud and what is unknown. Also I think that as an immigrant, because I move so much, I never know the whole story, so I can’t actually write what I know.Anita: I always tell my students, don’t write me a story saying, “And then I woke up and it was only a dream.”What are your impressions on how the literary world has changed from the move to ebooks, or [on] the virtue of a printed book?
Anita: I’m committed to the printed page, I can’t even imagine transferring it to a Kindle and finding that same private pleasure you have when you lose yourself in a book. Never made the change. I’ve never even moved away from hand-written notes.

Kiran: And then she types it out.Anita: Sometimes I cut out passages and paste them on another page... I’ve always done that so, it’s just a habit really I can’t break. I don’t feel the need to do that any other way. People keep saying there’s a way that’s so much quicker, and this is so slow, and to me that is much more important, to slow down.How does it feel to be recognized with international awards, how much importance do you put on it?
Anita: I think it’s a mistake to take them too seriously. With each book it’s a struggle to put down on paper what you’ve set out to do, to get it right; the prize is really irrelevant.I suppose it’s nice to have that prize in the sense that, it gets you a sense, a little bit of confidence, to have someone say you did it the right way, that it was the right thing do to. But you have to face that with each book.Kiran: Each book is such a struggle, that each time I had the same degree of doubt.If there was a moment of confidence it’s undone by the time you start working on another book. I think it’s hard to know how it will affect you. It does change one’s life.Things did change for me, not necessarily in good ways. It can be pretty disruptive. Both things happen at the same time, two contradictory things.And then you are read differently. In India for example, I would be read differently as a young unknown author than as a better- known author – and I would be read. Not only that, a novel is no longer a novel but it’s read as representative. So you’re not just talking about a character, a family or a place, so you’re representing that community and it becomes a completely different thing. It becomes a political matter.Anita: Writing is a very private, almost secret occupation. Once you win a prize you become more of a public figure and therefore you are more self-conscious in your writing...When I used to write before anyone knew my name, it gave me a certain freedom, I could write and write without any self-consciousness at all. Once your name is known and people expect you to write in a certain way, you become much more self-conscious and it’s bad.Kiran: That fearlessness, after you’ve been attacked enough, you become very cautious.