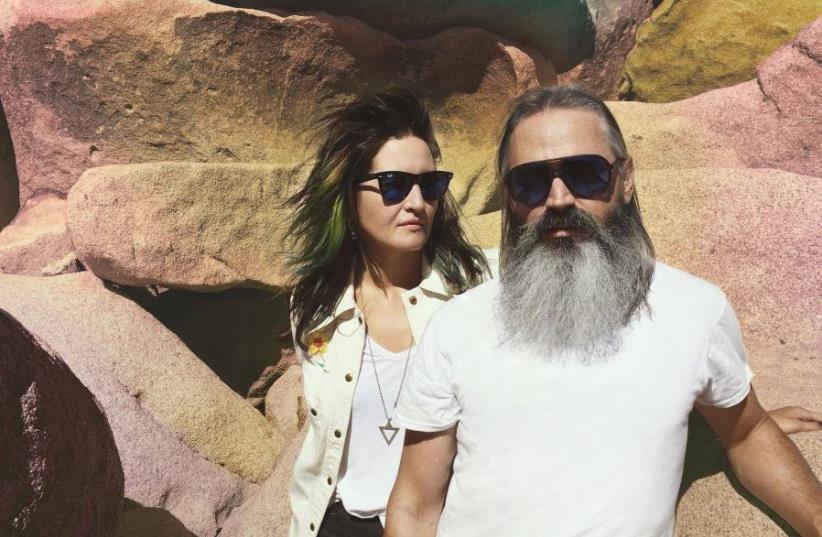 I THINK the occult is attractive to musicians because making music feels like channeling a force of unknown origin. What is music? Where does it come from? It is fundamentally mysterious, and it draws people into an exploration of mystery,’ says Moon Duo keyboardist Sanae Yamada (left) seen here wit
(photo credit: ELEONORA COLLINI)
Advertisement
Portland, Oregon-based rock band Moon Duo strive to reveal the hidden fabric of the world; the cycling rhythm and the great balancing act in which we all find ourselves. There is something both intrinsically vintage and futuristic about Moon Duo’s sound.Guitarist Ripley Johnson and keyboardist Sanae Yamada recently released their new, two-part album, Occult Architecture, and are coming to Israel to play at the Barby Club in Tel Aviv on June 21. Yamada sat down with The Jerusalem Post to discuss musical reference points, temporal cycles, and channeling the unknown forces of music.How did Moon Duo first form into a band? Ripley asked me if I was interested in starting a duo with him. He said it would be like “[American musical duo] Suicide with guitars.”I thought that sounded great, so I was in.What has your artistic journey been like over the past four albums? How has your creative process changed and how has your sound evolved? I think each person has the capacity to generate unique music, much as we all have unique fingerprints, though it takes time to find it, to know it. Our band is an ongoing process of discovering what “our” music is. We began with a loose concept based on shared reference points (Suicide, Silver Apples, Royal Trux) but as we go on the reference points have fallen away, and with each album we learn more about the nature of our shared sound.I think that comes across in the recordings; we started with a pretty primal, lo-fi, bare-bones sound and over time we’ve fleshed it out with dimension, texture and movement.What is occult architecture? Occult architecture refers to the repeating patterns, shapes and structures that compose perceived reality and nature as we know it.You released ‘Occult Architecture’ in two volumes. Can you talk about the themes it encapsulates: yin and yang, moon and sun, feminine and masculine? What do they mean to you and how are they reflected between the two of you? The two-volume release is a kind of homage to the balance of opposites.Part of the concept in the title is that an entity derives the meaning of its existence from its counterweights, or from the possibility of its absence – light is defined as light only because of the existence of darkness. They are the polar extremes of a spectrum, as are masculinity and femininity. The sun and moon are representatives of day and night, whose temporal cycle largely frames the workings of human consciousness. I’m really not sure how these ideas are reflected specifically between the two of us, though I can say that we share a desire to contemplate the nature of existence, and that that contemplation fuels the music.What was it like for you guys putting the new album together?We started recording at Tape Foundry in Portland. We did two sessions there, in February and April of 2016. We mixed the album in two sessions as well, the first at Kaiku Studios in Berlin, and the second at The Map Room in Portland.Both mixes were done with our long-time engineer Jonas Verwinjen.We planned separate sessions for each of the two volumes in the hope that it would contribute to the records having different sounds and characters.The album art for ‘Occult Architecture’ is pretty trippy, what’s the meaning behind it?The artwork is by an artist named Jay Shaw. We asked him for an image that evoked a kind of existential, cosmic journey. I absolutely love what he designed – the lone figure in the vast geometric landscape.You’re currently on tour. What has been your favorite place to play so far?I don’t have a favorite. We tour often, and it has provided us the opportunity to travel all over the world. It is a fascinating and very powerful experience to get these glimpses of life in so many different cultures. My favorite is the richness of the whole.You’re coming to Israel. Have you been here before? What can fans expect from the show? We came to Israel once before, in 2010. We were just starting out then. As far as what to expect from our show, I’m probably the wrong person to ask. I’ve never seen us play from an audience’s perspective.I think the biggest change is that we’ve added a live drummer, John Jeffrey, who brings a lot of dynamism to the show.How do you think the occult nature affects the world as it is today and the music world as you’ve experienced it? To me, the concept of the occult nature has to do with forces and mechanisms that drive the functioning of the cosmos and that flow beneath the face of material reality.I don’t think it affects the world so much as it just is the world, and everything beyond the world, and everything that composes the world, down to the most sub-microscopic level. As such, I think the occult is attractive to musicians because making music feels like channeling a force of unknown origin. What is music? Where does it come from? It is fundamentally mysterious, and it draws people into an exploration of mystery.What’s next for Moon Duo?We’ve got a full schedule of touring for the rest of this year. Beyond that, we’ll see.For more information on Moon Duo, including upcoming tour dates, visit: http://moonduo.org. For tickets to the Tel Aviv show: www.barby.co.il.