"All u haters- stop using god to hide your ugly homophobia," writes Assi Azar in bittersweet Facebook message after marrying husband in Spain. 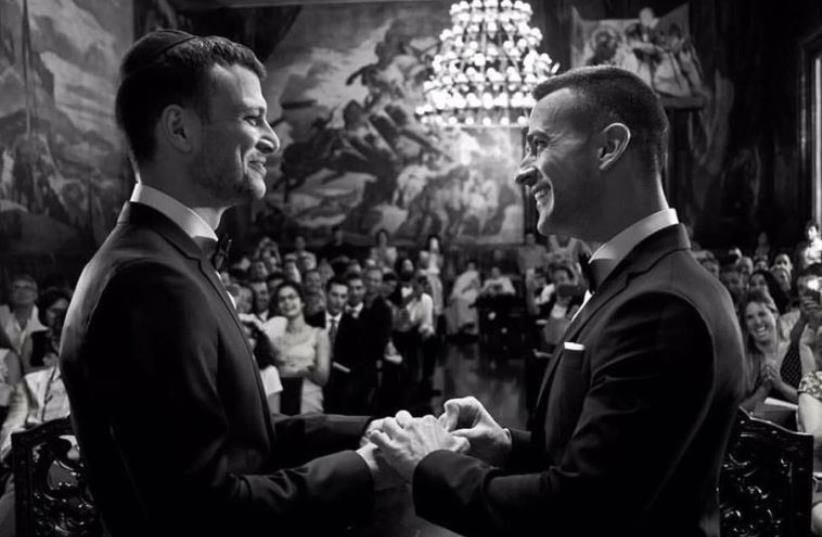 Israeli TV host Assi Azar
(photo credit: FACEBOOK)
Advertisement
Popular Israeli television personality Assi Azar married his long-time boyfriend Albert Escola over the weekend in Spain, in the shadow of the mass shooting targeting an LGBT night club in Orlando.The 37-year-old Holon native who formerly hosted Israel's Big Brother reality show described the bittersweet sentiment after finding out about the horrific shooting attack that killed 49 people following his nuptials. As one of Israel's most famous publicly gay TV hosts, Azar took to Facebook on Sunday to relay a message urging love and to express his sorrow over the brutal attack. "We send our love and prayers to our brothers and sisters in Orlando. We will keep fighting for those who no longer can," he wrote in the post accompanied by a photo from his wedding.The gunman in the shooting spree has been named as Omar Mateen, who had expressed sympathy for various Islamist extremist elements and groups, including ones in the Middle East. "All u haters- stop using god to hide your ugly homophobia," Azar wrote. "THE ONLY THING THE LGBTQ COMMUNITY BELIEVES IN IS LOVE, And LOVE will win at the end, it has to." News of America's deadliest mass shooting has rippled across the globe as masses have expressed their solidarity with the families of the victims and Orlando's LGBT community. "Yesterday was the best of my life. Me and my man stood in front of our families and friends and we all felt it- god was with us," Azar said in his post. "After hearing all my life that god hates me and hates gays, I learned yesterday that God do [sic] not stand with those who hate, Only with those who love."