Racha banks on a move to Tel Aviv to up its game. 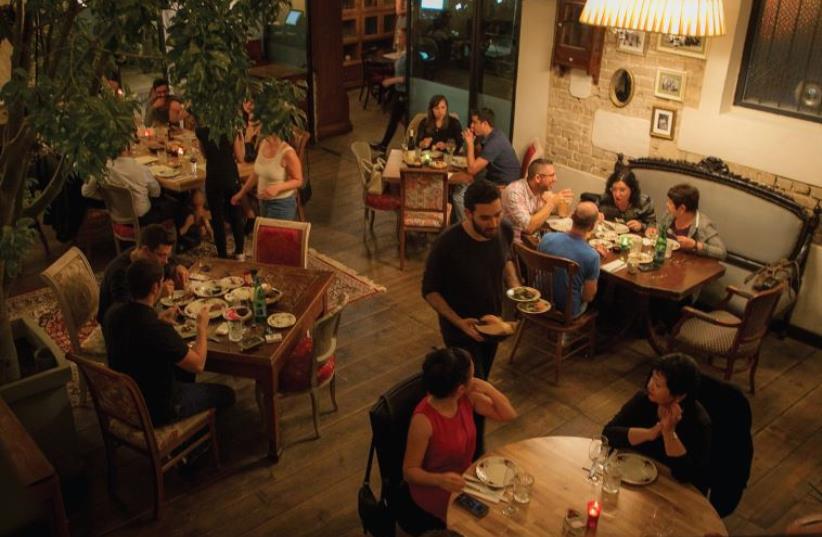 Racha restaurant
(photo credit: PR)
Advertisement
The vagaries of the security situation in Jerusalem has caused a number of restaurants in the capital to close down. One, however, has chosen to turn its crisis into an opportunity. Instead of shuttering its doors, Racha, the upscale Georgian restaurant formerly of Havatzelet Street downtown, picked up and relocated to Neveh Tzedek in Tel Aviv, where it now occupies a spacious, ornately designed main dining room, with an adjacent bar and a large room for private functions. (Fortunately for Jerusalemites, at least one other good Georgian restaurant remains in the city: Kangaroo, in Nahalat Shiva.) Presiding over the transplanted enterprise is owner-manager Lili Ben-Shalom, who views her job primarily as hostess, making sure that customers enjoy every aspect of her hospitality: a full table of food, glasses of chacha (Georgian grappa) served in special hornshaped shot glasses, and music designed to get parties of diners dancing.The chacha, which I found smoother than its Italian counterpart, is also the star of one of Racha’s six specialty cocktails: Gomarjos (NIS 44), an alternately tart and sweet blend of chacha, pomegranate syrup, sparkling wine and lemon, served in a flute glass and garnished with an amarena cherry. (Although there are English menus for the food and wine, the cocktail list is in Hebrew only.) Another interesting cocktail, with an astringent bite, is Skaipo (NIS 42): thyme-infused vodka with honey and lemon, served in a martini glass and garnished with a slice of lemon.The tables, set with elegant china, also greet diners with sotis furri (NIS 14) – crusty white rolls of Georgian bread – and kabusta, a piquant cabbage salad that perks up the taste buds in anticipation of the coming meal.Georgian meals typically begin with a spread of mezze-style salads. At Racha, they can be ordered à la carte or in grouped assortments of five (NIS 128) or 10 (NIS 230), recommended depending on the number of diners. My companion and I narrowed our favorites down to three: Tweeni (NIS 38) – beef brain in a spicy tomato sauce that had just the right amount of heat, which we mopped up with the excellent bread; Patrijiani (NIS 30) – eggplant stuffed with a zesty paste of ground walnuts, herbs and pomegranate that had the consistency of haroset; and Chirhali (NIS 28) – beet cubes with walnuts and herbs, which were as tender and sweet as you will ever taste this vegetable.A Georgian feast unfolds like an Italian meal, except that the pasta course is replaced with a second course of meat fillings encased in either fried or steamed dough. Of the four variations on the menu, our favorites were the Chiburiaki (NIS 38), crescent-shaped turnovers fried to crisp perfection and filled with nicely seasoned ground beef; and Hinkali (NIS 20/38), Chinese-style dumplings filled with a particularly succulent and juicy mixture of chopped meat.Main courses at Racha come in three categories: tavshilim (stews), grilled meats and daily specials. In each category, we relied on the staff’s recommendations.Salianka (NIS 84) – chunks of tender veal simmered with vegetables in a delectable gravy – certainly deserved to be the waiter’s first choice in the stew category.Kuppatti (NIS 88) – traditional Georgian sausage as thick as bratwurst – was Ben-Shalom’s recommendation. It turned out to be a surprising experience. At first bite, it seemed undercooked; then, slowly, it built into an explosion of flavor in the mouth.There was a long list of daily specials – as many, in fact, as the number of main courses on the printed menu.“We rotate the specials, and some become customer favorites,” says Ben-Shalom. “It would take you two weeks to taste everything on the menu.”According to shift manager Yael, the Duet (NIS 158) is the most popular special: Equal parts of rich goose liver and exquisite beef filet, accompanied by half a small pear stuffed with red onion jam and generous slices of fresh cantaloupe. Altogether an extraordinarily decadent dish.We accompanied our main courses with Georgian wine: Kindmrauli red (NIS 30) and Old Tbilisi Alzani white (NIS 32). Both were described as semi-dry and were rather on the sweet side.Desserts were also typically Georgian. The unusual churchkhela (NIS 32) – a sweet “sausage” of hazelnuts surrounded by a gelatinous wine pudding – was definitely worth a try.A large plate of assorted cookies – five different kinds – was served with Georgian black tea poured English-style from a tall, slim china teapot (NIS 48). A ceremonious finish to a memorable meal.Following Tel Aviv, the determined Ben-Shalom has her sights set on Europe. I wouldn’t count her out.The writer was a guest of the restaurant.Racha (Not kosher). 1 Ahad Ha’am St., Tel Aviv. Tel: 053-937-3366.