The veteran Israeli multidisciplinary artist speaks to the ‘Post’ about his latest album, musical improvisation and the importance of the scream. 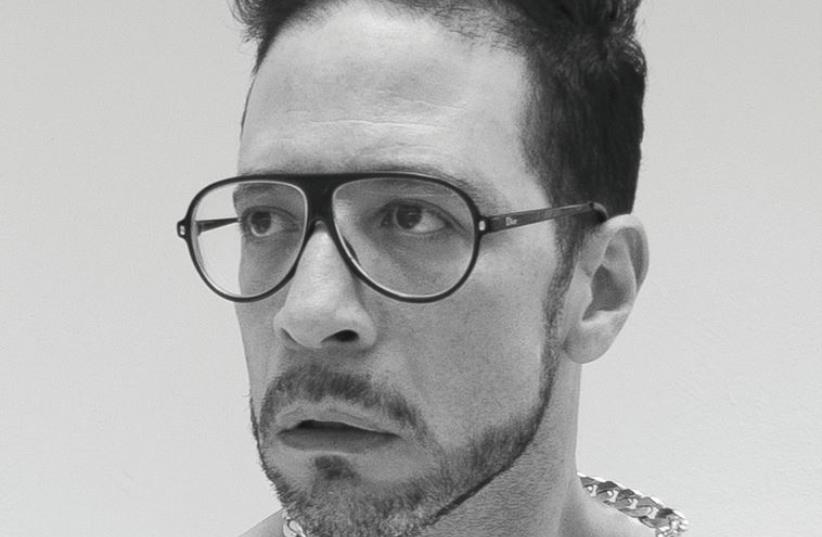 ‘WHEN YOU improvise, you have to be in the moment. If you’re not in the moment, you’re not there at all,’ says multidisciplinary artist Gilad Kahana.
(photo credit: RONEN LALENA)
Advertisement
To perform art properly you need to be disciplined, trained, talented and, no less important, relaxed. Gilad Kahana found an efficient way of releasing tension some years ago, and the rest is ongoing multidisciplinary artistic history. “I didn’t know I could sing until I screamed,” he says.“Then things began to happen.”And how! The boyish-looking 45-year-old multidisciplinary artist and former lead singer of the rock band Girafot will reference the recent release of his latest album, My Africa, with a typically grandly proportioned event which takes place this evening at the Tel Aviv Cinematheque (10 p.m.). The program takes in screenings of 10 video clips, with the directors and creators – including the likes of stellar actress, model and media personality Yael Aboukassis, actor and musician Michael Moshonov and writer-musician Shimon Addaf – on hand to talk about their work.There will also be a couple of documentaries, including a brief work about Kahana’s unlikely pairing with Shachar Ernest who wrote the words for “Tzemach Harotem” (Broom Plant), one of the tracks on My Africa, when he was just five years old. The other movie is a much longer effort, and documents the multifaceted CD launch, which took place late last year. True to his wide-roaming creative bent, Kahana oversaw a sumptuously crafted artistic enterprise which took in dance, video art, theater, performance, spoken word and animation works.The event was spread out over three nights with slots installed in 17 rooms of the Romano House building in Tel Aviv.“When the record was released I arrived at the realization, together with some other people who worked on it, that I really don’t want to do a [launch] concert,” says Kahana. “I wanted each song to be artistically represented but, in fact, to create new works inspired by the record, to represent the record in a plastic way.”“Plastic” sounds a little on the artificial side, and not particularly inspiring or emotive. Kahana begs to differ.“We took 17 rooms and created an installation in each one, each song had a room,” he explains, adding that the event was very much site specific, with the performance side feeding off the venue, and vice versa. “The idea was to devise a sort of ecosystem of the space in which the inspiration, as it were, lands.”There was a snowball effect to the artistic continuum.“The rooms started to impact on each other,” Kahana continues.“You’d hear something from one room or another. And there were 66 artists involved in the 17 rooms, and they began to pop into each other’s acts. The whole building turned into a kind of pulsating creature of creation. It was a very powerful experience.”The evolutionary wheels had been truly set in motion, and Kahana kept the sequential bandwagon rolling merrily and creatively along.“I began to do shows, and a lot of improvisation started creeping in,” he says. “Improvisation is a critical factor in all this. In fact, the whole album is the result of lots and lots of improvisation. You could say that I kept the improvisation going with the launch. The idea was to never stop creating. I wanted to keep the energies flowing, and to take off.”Some like to hear songs and watch shows they know well and trust, while others prefer the more amorphous side of the entertainment tracks. Kahana certainly belongs firmly with the latter camp.“I didn’t know anything, really, when I started working on My Africa,” he posits. “I just went with the flow.”While that may seem exciting, it all sounds a mite of the risky side.Kahana might have ended up with the little in the way of wares worthy of public consumption.“That’s the key. That’s the whole essence of this thing,” he declares.Then again, watching the captivating video clip that goes with the title track, in which Kahana takes us on an enchanting trip through what appears to be the southern neighborhoods of Tel Aviv, you get the feeling that you are viewing a highly polished product. That was clearly no flyby- night effort.“Yes, we worked on that for a year,” admits Kahana, while explaining that he takes a bifurcated approach to his work.Kahana gives the impression of incorporating a well-balanced fusion of creative laissez-faire and well-oiled intellect.“Let me explain my interior hierarchy. My brain was ousted from the central role, but it was given a very important part play – a guest role. I let the child in me to run wild and free, and do what it wants. But then the kid is told to have a rest, and do something else. Then the guest moves in and starts to make sense of everything that has gone on. Meanwhile, the kid has already moved on to the next thing. I am very connected with this thing. It’s a constant voyage of striving for the horizon.It’s a never-ending thing and that comes through in the improvisation.When you improvise, you have to be in the moment. If you’re not in the moment, you’re not there at all.”Kahana has been there and everywhere practically since the word go. He displayed a natural talent for writing at an early age, and started developing his musical consciousness through the sounds of Seventies bands such as ABBA and The Bee Gees.“I love that pop sound,” he exclaims. “When ABBA were good they were really great, and when they were bad they were terrible.”Later he got into punk rock, and found himself naturally drawn to the frowned-upon.“I loved all the singers who couldn’t really sing,” he says.Kahana’s own voice is not exactly of operatic proportions.“I loved instrumentalists who seemingly couldn’t play and I loved short numbers with biting lyrics that were full of angst.”Over the years Kahana has dipped into practically every area of artistic endeavor going, and his scream has taken on new and fresh facets. It should be fun at the cinematheque this evening.

For tickets and more information: www.giladkahana.com and www.cinema.co.il.
Advertisement
Subscribe for our daily newsletter