The artist and actor crafted an immense mural at the Peres Center for Peace on Sunday, sending a message of peace and using his craft to call for a resolution to the conflict. 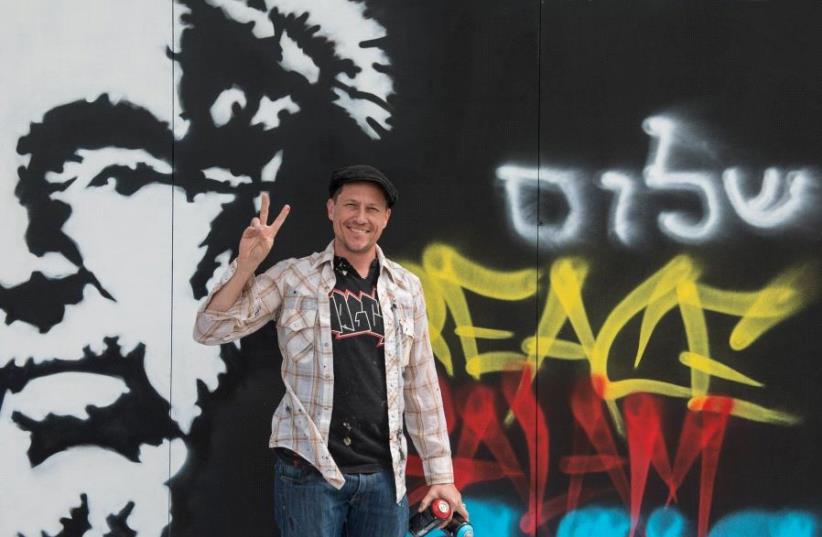 Graffiti artist and actor Corin Nemec stands by his creation at the Peres Center for Peace.
(photo credit: BENNY DOUTSH)
Advertisement
At a time when more and more international artists, actors and performers cave in to pressure applied by representatives of the Boycott, Sanctions and Divestment movement and cancel their visits to Israel, international graffiti artist and actor Corin Nemec arrived in Israel on Sunday to send out quite a different message. Nemec, who is widely recognized for playing the title character in FOX's Parker Lewis Can't Lose, arrived in Israel to show his support of the country and carry out a special artistic endeavor with the hopes of promoting regional peace. The artist, flanked by children participating in a special program at the Peres Center for Peace, created an immense graffiti mural depicting the late Shimon Peres, Israel's ninth president, and sending a moving message calling for the end of the conflict between Israelis and Palestinians.  By visiting Israel and crafting the mural that will be permanently displayed at the Peres Center for Peace, Nemec hopes to spread his faith in peace, tolerance and coexistence. "I stand by Israel, in the real world and on social media," he said on Sunday, stressing his support of the Jewish State. Speaking about his collaboration with Israeli children to produce the artwork, Nemec said that he was "happy to see that here at the Peres Center children from different backgrounds and cultures forge good friendship and moving collaborations." Nemec also said that he believes that children have an essential role in the dialogue between the two sides and could potentially help speed the peace process along. "I believe that children and adults can collaborate together through art and bridge geographical and cultural gaps," the artist shared. The visit and its artistic outcome were facilitated by Israel's Ministry of Foreign Affairs and Tel Aviv's mayor, Ron Huldai. "I am happy and excited to be here in Tel Aviv, which is one of my favorite cities in the world," Nemec said of his time in Israel. Tel Aviv Mayor Huldai echoed Nemec's sentiment, saying that Nemec's visit to the Peres Center for Peace was especially meaningful. "Today we are at the home of a man who consistently dreamed about bringing peace- Shimon Peres. I'm glad to have been given the opportunity to take part in a project that enables adults and children to connect, get closer and and lead [the process for] peace in our region." Nemec's beautiful mural and firm support of Israel stand out in particular against different artistic endeavors created by artists who have used the medium to criticize Israel. One such prominent example of a graffiti artist who through his craft sent out his own message about the Arab-Israeli conflict is that of world-known guerrilla artist Banksy. The British graffiti artist, who has used his art in the past to address the conflict, sparked a heated debate earlier this month when he opened the Walled Off Hotel, an establishment situated in the West Bank city of Bethlehem and overlooking Israel's security barrier.  While the activist did tell the press that his intention was to inspire a conversation between Israelis and Palestinians, he was also quick to note that the hotel has "the worst view in the world."