The veteran British actor takes part in Keshet’s TV conference in the capital. 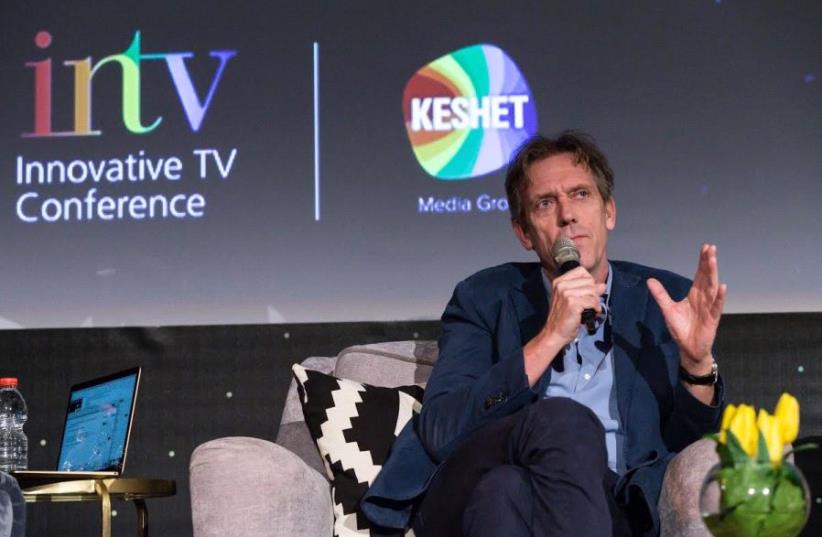 Hugh Laurie at Keshet’s Innovative TV Conference in Jerusalem
(photo credit: ODED KARNI/INTV)
Advertisement
Hugh Laurie is worried that spy films and television may be a thing of the past. After all, the current state of world affairs may have more twists and turns than fiction can keep up with.“I would say the frightening thing about the world today is that everything is precisely as it seems,” Laurie told the audience Tuesday at Keshet’s Innovative TV Conference in Jerusalem.“It’s complete f#@king mayhem.”Laurie, the veteran British actor, comedian and musician best known for his role on House, was in town to participate in a panel at the conference about his latest project, the British TV miniseries The Night Manager.The six hour-long episodes of the show, based on the book by John le Carre, follow a British hotel manager turned spy tasked with infiltrating the inner circle of a dangerous international arms dealer.Laurie discussed the show on a panel alongside its director, Susanne Bier, and its executive producer, Stephen Garrett.But Laurie isn’t sure what the future of spy thrillers like The Night Manager may be in today’s conflict-filled times.“My worry for the future of this genre,” he said, is that “essentially all spy stories and in fact all stories, depend upon sort of at least beginning from a position of stability.”“That’s what a story is, you have a normal situation, you part from it and then you return at the end with an altered normality, that’s exactly what a story is.”Laurie, without mentioning US President Donald Trump by name, alluded to his unpredictable and often volatile behavior.“And now, I just don’t know – where is the sort of stable veneer under which great conspiracies can happen?” he asked. “I mean every hour that we watch CNN was a pitch meeting for a TV show five years ago; it’s absolutely astounding.”While Laurie seemed mildly agitated discussing the state of world affairs, he was mostly casual and playful on stage, hamming it up for the audience – no surprise considering his storied comedic career.At one point, Laurie explained why he felt miniseries – as opposed to films – do particularly well in the UK.“I happen to think that the British psyche is better suited to television than to film,” he said. “Americans, I think, can conceive of their lives changing unrecognizably in 90 minutes – they meet the girl, get the promotion, win the lottery, whatever it is.”“No British life,” he added, “has ever changed in 90 minutes.”