In season: Sip a soup

Warm up in these cold winter days with a steaming bowl of one of these dishes from restaurants at Sarona Tel Aviv. 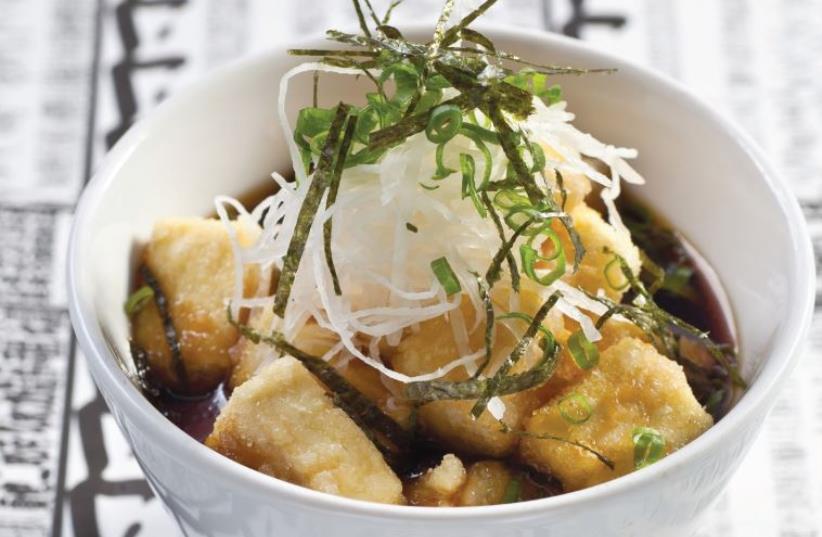 Agedashi tofu soup
(photo credit: PR)
Advertisement
Chilly temperatures have reached Israel over the past couple of weeks, so there’s no time like the present to warm up from the inside out with a steaming bowl of soup. The following soups were selected from the menus of four restaurants in the trendy Sarona Market in the heart of Tel Aviv.The Italian Piazza Rustico restaurant presents a thick and creamy pumpkin and chestnut cream soup, enriched with porcini mushrooms and white wine.From the Akiko Japanese sushi bar, we have a recipe for a traditional Agedashi tofu soup – an intense flavorful stock piled high with a mound of crispy, fried tofu cubes.Kampai, which serves Asian street food, offers a recipe for the classic Thai dish tom yam kai – a very spicy soup filled with chicken, coconut cream, tomatoes, noodles and more.And Little Italy’s Trattoria gets in the soup game with a recipe for a rich and hearty orange lentil soup topped with a dash of creme fraiche for a contrast of textures and flavors.Whatever your ideal, now is the season to get your soup on! PUMPKIN AND CHESTNUT CREAM SOUP
Courtesy of Piazza Rustico ✔ 2 kg. pumpkin, peeled and deseeded
✔ Olive oil
✔ 10 sage leaves
✔ 20 gr. butter
✔ 100 gr. diced onion
✔ A handful of celery leaves
✔ 1 garlic clove, finely diced
✔ ½ cup white wine
✔ 30 gr. dried porcini mushrooms, soaked in water
✔ 300 gr. chestnuts, diced
✔ 1 container cooking cream
✔ Salt and pepper
✔ Optional: Truffle oil Dice the pumpkin into cubes about 3x3 cm. each. Arrange the cubes on a parchment paper-lined baking sheet and brush them with olive oil, then sprinkle the sage leaves on top. Bake the pumpkin at 200º for about 40 minutes, until it is lightly browned and easily pierced with a fork. Let cool. Mash the cooled pumpkin with a fork until smooth, leaving five of the sage leaves in the mixture.In a large pot over medium heat, melt the butter together with the diced onion and the celery leaves. Cook for about 5 minutes, until lightly browned. Add the garlic and white wine to the pot, turn the heat to high and cook out the alcohol from the wine.Add the mushrooms to the pot along with the water they were soaking in, then add the mashed pumpkin, chestnuts and cream.Add salt and pepper to taste.Bring the soup to a boil, lower the heat and cook for about 20 minutes, stirring occasionally.Using a stick blender, blend the soup until it is smooth. Adjust seasoning to taste.Serve in a soup bowl with a dash of olive oil or truffle oil on top.AGEDASHI TOFU SOUP
Courtesy of Akiko ✔ 3 cups water
✔ ¾ cup mirin
✔ ¾ cup soy sauce
✔ 3 Tbsp. sugar
✔ 4 tsp. dashi fish stock powder (or other soup power)
✔ 8 dried shiitake mushrooms
✔ 800 gr. tofu
✔ Cornstarch
✔ Oil for frying In a large pot, mix together the water, mirin, sugar and dashi powder. Bring the mixture to a boil, and add the mushrooms.Boil for another 2 minutes, then turn off the heat and add the soy sauce.Cut the tofu into small cubes and toss them with the cornstarch to coat. Fry the cubes in oil until golden.Pour the soup into a deep bowl and top with the tofu cubes, then garnish with green onion, radish and seaweed.

ORANGE LENTIL SOUP
Courtesy of Little Italy’s Trattoria ✔ 6 Tbsp. olive oil
✔ 1 onion, roughly chopped
✔ 5 celery stalks, finely diced
✔ 1 carrot, grated
✔ 1 celery root, cubed
✔ 3 garlic cloves, diced
✔ 200 gr. orange lentils, rinsed
✔ Water
✔ 5 bay leaves
✔ Salt and pepper For garnish
✔ 100 gr. creme fraiche
✔ 1 bundle of chives, finely chopped
✔ 10 radishes, very thinly sliced
✔ Olive oil Heat the oil in a large pot over medium heat. Add the onion, celery, carrot, celery root and garlic. Cook, stirring regularly, for about 10 minutes, until beginning to brown. Add the lentils and cook for another 2 minutes, then add water until all the ingredients are covered.Bring the soup to a boil and lower the heat. Add the bay leaves and cook for about an hour and a half, until the lentils are completely soft. Skim the froth off the surface of the soup as necessary.Remove the bay leaves from the soup and use a stick blender to blend it until smooth.Add salt and pepper to taste.Pour into soup bowls and garnish with creme fraiche, chives, olive oil and radishes.TOM YAM KAI
Courtesy of Kampai For the stock
✔ 1.2 liters water
✔ 2 Tbsp. olive oil
✔ 4 chicken wings
✔ 1 stalk of lemongrass, diced
✔ 1 ginger root, cut into small cubes
✔ 4 kaffir lime leaves
✔ 2 garlic cloves, crushed
✔ 2 Tbsp. sugar
✔ 1 Tbsp. salt
✔ 2 shallots, diced
✔ 2 Tbsp. tom yam paste For the soup
✔ Tom yam stock
✔ 8 champignon mushrooms, quartered
✔ 8 cherry tomatoes, halved
✔ 1 stalk green onion, diced
✔ 2 shallots, diced
✔ 300 gr. chicken breast, thinly sliced
✔ 3 Tbsp. soy sauce
✔ 1 can coconut cream For garnish
✔ ½ cup cilantro leaves
✔ 1 lime, quartered
✔ 1 fresh chili pepper, finely diced
✔ 1 tsp. chili oil To prepare the stock: In a large pot, heat the oil and add the chicken wings. Fry well until the wings are golden brown. Add the shallots, ginger, lemongrass and garlic, and fry lightly. Add the water, sugar, salt and tom yam paste. Bring the mixture to a boil, lower the heat and cook for 40 to 50 minutes.Strain the stock and let cool.To prepare the soup: In a large pot, mix together the prepared stock, chicken, coconut cream, soy sauce and vegetables. Bring to a boil and cook until the chicken is completely cooked through. Add salt and pepper to taste.Pour the soup into bowls and garnish with the cilantro, chili slices, chili oil and lime for squeezing on top.
Advertisement
Subscribe for our daily newsletter