In the witching hour

Frontman Michael Charles Parks and his Nashville psych-rock band All Them Witches are looking forward to putting fans in Tel Aviv under their spell. 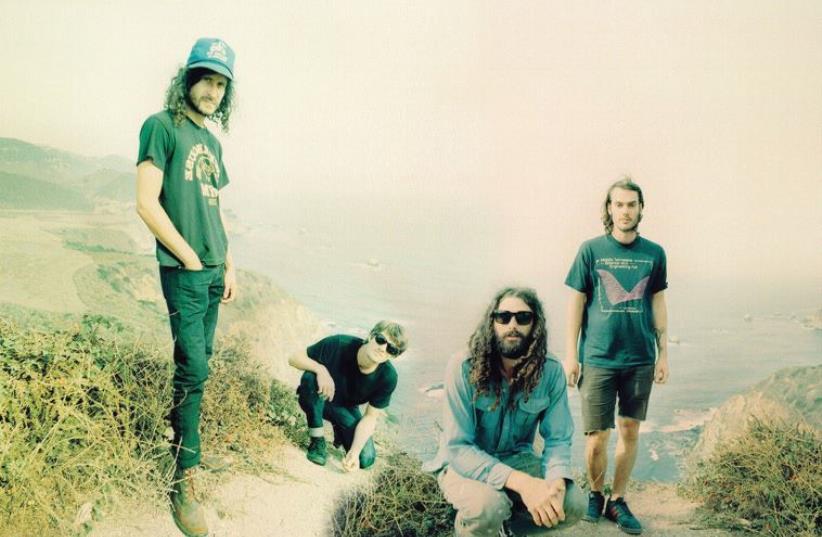 All them Witches frontman Michael Charles Parks (far right) seen here with the rest of the band
(photo credit: ROBBY STAEBLER)
Advertisement
After their show in Fullerton, California last week, the members of psychedelta band All them Witches drove straight to Joshua Tree National Park a few hours away and camped out for the night.“We wanted to wake up in the desert,” explained the Nashville-based band’s bassist and singer Michael Charles Parks, who prefers to go by his last name.That connection to the great outdoors, as well as a good dose of swampy acoustic voodoo, a grimy, pounding blues beat and backwoods folkloric lyrics, has manifested itself in the quartet’s music since their formation four years ago. Between naming their band after a line in the vintage horror film Rosemary’s Baby to recording their new cryptically titled album – Dying Surfer Meets His Maker – in a remote cabin in Tennessee for six days, it’s evident that All Them Witches aren’t aiming for the pop charts. Instead, they’re trying to find that astral sphere where The White Stripes, Pink Floyd and Led Zeppelin intersect, full of bluesy bluster, Southern swagger and eerie lightness.“I would say we are partly a southern band – part of our style being southern influenced for sure,” said Parks, who grew up in Louisiana before heading to Nashville at age 19, where he met his band mates – drummer Robby Staebler, guitarist Ben McLeod and keyboardist Allan Van – through shared day jobs.“But we all came from different places musically. I was into ZZ Top and blues, Robby and Ben loved classic heavy rock and Allan was into classical music. But we all have this Southern thing going on. We came into friendship via music as a common bond.”Through their first couple of years together of building a following and releasing their debut Our Mother Electricity and its 2013 follow up Lightning at the Door, the band members brought food to the table in a number of ways, that for Parks and Saebler included work as arborists.“I did it for a while, but Robbie did it more seriously. We both stopped because it got to be too dangerous,” said Parks. “I decided that I didn’t want to lose any fingers or throw my back out, so we decided to focus only on music. I’m staying away from tree service.”That concession to convention is one of the few that the desert-loving Parks has made. He claims that his belongings are in storage and that he doesn’t pay rent or own a house, saying “I kind of live everywhere.”The “child of the Earth” persona permeates the band’s songs, which veer from swirling jams and hard rock drums to lilting acoustic guitar passages within the same songs.“We appreciate the dynamics of music, so it’s both an intentional and organic approach in the way that it changes from heavy to soft. We try to find the balance in those things,” said Parks.Parks’ lyrics for the songs are just as diffused, but according to the writer, there’s a story they are telling.“There are cohesive themes throughout our albums in a way that is maybe impossible to understand or convey to another person,” he said. “But in my mind, the songs are more like the old school teaching songs, how cultures passed down tradition from generation to generation. It all makes sense to me and I hope it makes sense to different people in different ways.”All Them Witches will be trying to make that connection with new fans during their first tour of Europe this month, leading off with their debut show in Israel on February 24 at the Barby Club in Tel Aviv. Besides expressing anticipation at performing before audiences on the other side of the world, Parks was also psyched at the prospects of sampling some of the country’s own desert trails.“I’ve wanted to come to Israel even since I was a little kid. I can’t wait to see everything. We’re all really excited to be coming,” he said.Musically, he promised the Tel Aviv audience a unique show, not a bold prediction considering the band tends to stretch out in concert to uncharted destinations.“The improvisation and jamming happens naturally, so no two shows are alike,” he said. “The main bullet points are there, but all the stuff in between is always different.”Sort of like life itself.