The Blues Festival in Tel Aviv extends to Jerusalem 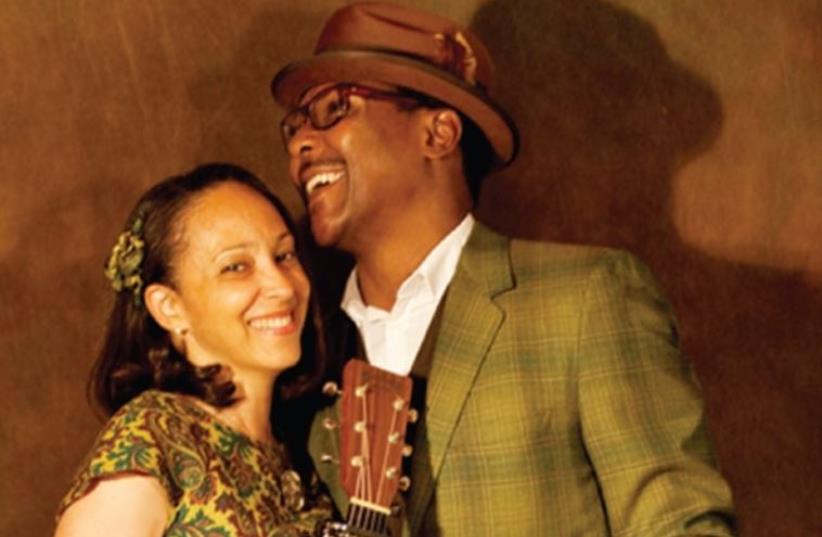 Ben and Valerie Turner
(photo credit: PR)
Advertisement
Local blues fans must be in seventh heaven. Before Yamit Hagar came on the scene three years ago, pickings were relatively slim. The Tel Aviv Blues Festival last June helped to up the ante a couple of notches. That followed Hagar’s debut offering of Mississippi bluesman Robert Belfour in 2012, with a string of other highprofile roots bluesmen thereafter playing to packed audiences.The Israeli blues market will receive another push in the desired direction when the next installment of the TA Blues Festival takes place. This time, however, the momentum churned up by four-day event (December 2-5), will be maintained by an additional seven days of shows in Jerusalem (December 6-12).The stellar imports include a return to these shores by charismatic multiinstrumentalist Jerron “Blind Boy” Paxton and 70something Louisianaborn guitarist-harmonica playervocalist Lil’ Jimmy Reed and the Piedmont Bluz Acoustic Duo.The latter twosome comprises husband and wife Ben and Valerie Turner, who will strut their stuff at both ends of Route 1 in the first week of December.Valerie says that her musical pathway evolved from a chance encounter of a more visual than sonic nature. “I stumbled upon the blues when I purchased a book which I bought because I thought the photographs in it were very interesting,” says the guitarist-singer.“They reminded me of the scenery you would see if you lived in the South, along the east coast.”The images in the book connected neatly with Valerie’s familial background. “My mother and father came from the southern part of the country, and when I saw the pictures in the book it reminded me of their childhood,” she recalls.The photographs soon drew her into a direction from which there was to be no return. “As I was reading, I was learning about this interesting [blues] music. And once I heard it, I really loved it, and I knew that I wanted to play it,” she says.The existence of blues music wasn’t entirely foreign to Valerie, but she was not into the original roots format of the genre that hailed from the Deep South. “I knew about more modern forms of blues, the electric blues, but I had not heard the acoustic version that preceded it,” she says.The rural blues book encounter took place more than 30 years ago, but it set her on a path to what she does today and what she will offer her audiences in Tel Aviv and Jerusalem, as well as Jacob’s Ladder Festival faithfuls over the preceding weekend.Once bitten by the blues bug, Valerie began digging deeper into what was essentially her family heritage, too. It was also something of a well-kept family secret. “As I started exploring that and speaking to different relatives, I found that, for example, I had grandparents and aunts and uncles who did know about that music, and they were quite surprised to learn that I had found it,” she says.In the interim, the Turners have released several live albums, performed at such venerable events as the Brooklyn Folk Festival and at the Archie Edwards Blues Heritage Foundation in Washington, DC.There was no surreptitious or premeditated reasoning in the fact that Valerie had not been told about her forebears’ musical preference, it was just a matter of letting things go.“Many people have just moved past it,” says Valerie, adding that she is not about to follow suit. “One of the reasons Ben and I enjoy playing this music is that we want to remind people where modern music came from.”She has a salient point there.Interestingly, the blues revival of the early 1960s was fueled by musicians on the other side of the Pond, principally Alexis Korner, who discovered the blues and promulgated it as far and wide as possible, even to the point of re-exporting it back to its homeland.In fact, one could go so far as to wonder what the subsequent global rock scene might have looked like – if, indeed, it had happened at all – if the likes of Mick Jagger, Keith Richards, Jimmy Page and Jack Bruce had not featured in Korner’s various lineups.Mind you, it was not as if Valerie had been starved of musical influences prior to happening upon the book with the photographs. She started playing ukulele at the age of five, followed four years later by the guitar, and there were plenty of LPs to be listened to at home, which took in her father’s preference for classical music and jazz, while her mother generally went for African and calypso music.“Anything but country blues, I guess,” chuckles Valerie, referring specifically to the subgenre from which the Turners took their professional moniker.As she got deeper into the music, Valerie began seeking out artists with the requisite experience and roots who could open her eyes and ears and widen her Piedmont blues horizons. One of the important contributors to her developing blues skills was guitarist John Cephas who, together with harmonica player Phil Wiggins, helped to keep finger picking-based Piedmont blues out there.Ben came on board at a later stage but was instrumental in getting Valerie to share her accrued skills and knowledge with blues fans. “I am an artist, and I had never played an instrument before I met Valerie,” he says. “One day, I picked up a washboard in an antique shop and brought it home as joke.”The funny side eventually took a serious turn, and Ben now plays washboard, as well as some harmonica and bones. Ben also introduced the world to his wife’s music.“She played it mostly at home” he says. “We eventually got her out to open mics and other small places, and people really enjoyed her playing. And that was even before she started singing.”The Turners say that their mission is to keep the Piedmont blues alive, although they generally throw a couple of Delta blues numbers into their shows, too.For tickets and more information about the Tel Aviv-Jerusalem Blues Festival: 054-219-5133