Israeli musician Arnold Nesis’s search for the man who sent him as a youth an electric guitar goes viral and inspires millions. 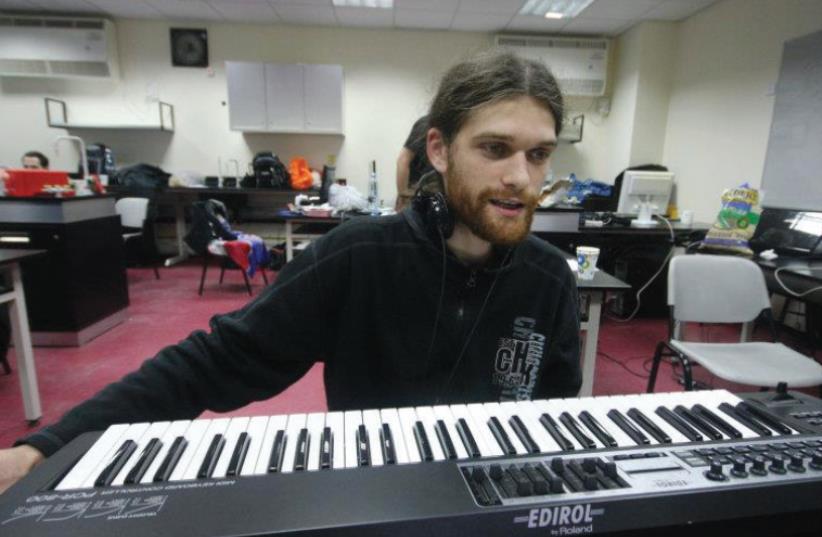 Israeli musician Arnold Nesis
(photo credit: NIR MIRETZKY)
Advertisement
Fifteen years ago, Arnold Nesis was a poor Israeli kid with big dreams. Born in Russia, he moved to Israel with his family when he was five years old. As a budding young musician he was desperate for an electric guitar, but without parental support or funds, the prospects of acquiring said guitar were slim. In a feat of bravery and some might say naivete, Arnold sent emails through Ebay, asking sellers to send him their guitars if their auctions were unsuccessful. One man responded that he was also a Jew, and that since it was around Hanukka time, he would send Arnold his electric guitar as a gift. He even paid for shipping from America. Now Arnold is trying to find this mystery benefactor, who kick-started his career as a musician. Arnold posted a video on December 27, where he told his story and asked for help to find the man. That video has now gone viral, and its message of one act of kindness making such a big difference has inspired millions.Arnold sat down with The Jerusalem Post to talk about being a naive kid, making video game soundtracks and what it’s like to read 2,000 messages.After watching the video, my first question is, have you managed to find the guy yet?No, still trying, but we’ve made some progress. We found the guy who was the first one to buy the guitar from the store and sell it to Bill Doran. This was back in 1991, so it was a long time ago and he doesn’t really know anything about Bill. We know he’s from California, so we’re going on that and hoping to find him soon.So let’s go back to the beginning of this story. What was your life like 15 years ago?I started playing, and bought myself a classical guitar after working in the summer. I decided that I wanted to move forward and start playing the electric guitar. I asked my parents and they said no. So I knew I had to find another way.It wasn’t as dramatic as it sounds now; I just went onto Ebay, asked for help, and I got it. It seemed very natural at the time, but now looking back, I understand that it isn’t.I know now that that’s not how the world works, but back then, it was as simple as I asked for a guitar and I got it. It happened really fast, on the first day. I went onto Ebay and sent about 20 emails, and one of them said yes. So at that time I thought, you go online, you ask for things, and you get them. My parents were really surprised! I don’t think at the time, I understood how awesome it was. I think I kind of took it for granted.

After receiving the guitar, did you feel a need to put in 100% effort towards becoming a great musician, since someone had done this act of kindness for you?

By the time I asked for the guitar, I was already really serious. I don’t think my friends even knew how serious I was until the moment that guitar arrived without their help, and they realized. Also from that moment on, they were really supportive because they saw that music was something that was there to stay in my life. They were all shocked about the guitar, since they knew I didn’t have the money to afford it.Do you think it was divine providence or fate that you received this guitar for free from another Jew?I don’t believe in fate or anything like that. I think I was lucky to stumble upon a really good man, who changed my life. I don’t think it was the universe saying anything.Now you’re a working musician?

I compose soundtracks for video games. For the past two years, I’ve had my own company which turns music albums into video games.We’re working on a project called The Birdcage, which is our flagship project. One of the musicians from Guns ‘n Roses as well as one of the former musicians from Evanescence are on it. The name of the company is Capricia Productions, which came from the name of my band. I was in a metal band. We signed with a label and put an album out.What has the response been like after you posted the video? I posted it at the same time on Youtube and Facebook, and the response has been amazing. I was very surprised. I posted the story with a picture of the guitar about three years ago, and 500 people shared it. So I thought I’d make a video and hopefully get a better response. I was expecting maybe 1,000 shares. But it got a lot bigger! Once I understood that it was going viral, I expected to get bad comments, but they never came.The vast majority of people who wrote to me were really positive. I got a couple thousand messages.I’ve done nothing for the past week but read these messages! I stopped working for a week and just read.People expressed that they connected with my story.Why did you expect bad responses? Because it’s the Internet; that’s how it works! I didn’t expect it to be all bad, but I did expect more sarcastic comments than what I got.How many shares did you end up getting?It’s hard to say because there are a bunch of posts; there are my posts, and then there are other sites who have downloaded the posts and then uploaded them. I guess around 100,000 shares and three million views. Somewhere in that range. It’s crazy.How has this affected your music career?

I was very careful not to mention what I’m doing in music specifically in the video because I didn’t want to self-promote. So it didn’t really help at all. I met a lot of people, so it’s hard to say where those new connections could lead. Whenever you meet a new person, it could lead to anything. My music project is on crowd funding right now, and someone gave us five bucks. If I’m being really sincere, it’s a dilemma that I was faced with because my video did go viral. There were people telling me that we could monetize the video and put commercials in it. Or we could have protected it, so that other sites wouldn’t be able to repost it. Then I was faced with the dilemma of whether I was okay making money off of this.Let’s say that you find this man who helped you so many years ago. What do you want to do?

A lot of people ask me that and I don’t really have a good answer! I just want to show him what I’m doing now. I’ve had the opportunity to work on some great projects, and to make a living off of music, and I’m really not sure that would have happened if he hadn’t sent me the guitar. I also want to pay him back. My guess is that it wasn’t so significant for him at the time, but the point is to show him that what he did really had an impact on me.
Advertisement
Subscribe for our daily newsletter