The Israeli Opera presents ‘Romeo and Juliet’ by Charles Gonoud. 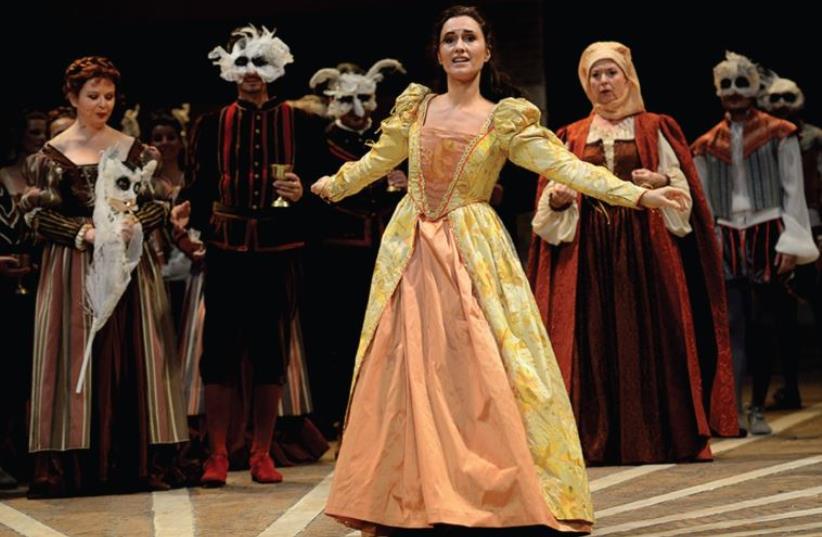 The Israeli Opera presents ‘Romeo and Juliet’ by Charles Gonoud
(photo credit: ALAIN HANEL)
Advertisement
There’s nothing like a good love story to draw in an audience.The Bard certainly knew that, and Charles Gonoud also recognized the value of a good old romance, especially if it comes complete with a tragic denouement.The latest rendition of Gonoud’s take on Shakespeare’s Romeo and Juliet will be presented at the Opera House in Tel Aviv over the next couple of weeks, with 14 performances lined up between today (1 p.m.) and May 1, with the official premier slated for Monday (8 p.m.).The Frenchman’s work was first unveiled at the Théâtre Lyrique in 1867, and did brisk business from the outset. And it is not difficult to see why. The plot has everything going for it – bitter rivalry between wealthy clans, snobbery, uncompromising love and, eventually, death.The forthcoming production is shot through with stellar contributors, including Uruguayborn tenor Gaston Rivero and Uzbekistan-born counterpart Najmiddin Mavlyanov in the role of Romeo, while the female lead role will alternate between sopranos Aurelia Florian from Romania and Israeli Hila Baggio.The non-singing team isn’t too bad either, with 37-year-old Italian Francesco Cilluffo sharing conducting duties with Karin Ben- Josef, while seasoned professional Eric Chevalier from France is the brains behind the stage aesthetics and German costume designer Carola Volles making sure all the performer are suitably enrobed.The man entrusted with making sure everything comes together seamlessly is 55-year-old Germanyborn and Monaco-based director Jean-Louis Grinda, who has already shown Israeli audiences what he is capable of.“This is my fifth opera here. I did before La Gioconda, Mefistofele and Don Carlo and Die Zauberflöte,” he states. It is also his third time at the helm of Romeo and Juliet, although his first production of the work in this part of the world.Grinda was happy to be back, although he was not underestimating the size of the task ahead of him and the rest of the team in the run-up to today’s first showing.“It is wonderful to be back at the opera in Tel Aviv, and I love your country,” he enthused. “I love this theater. It is not easy but it is always nice here. It is a very good atmosphere for work.”Having a tried and trusted favorite on your hands can, says Grinda, be something of a double-edged sword.“It is very difficult to be original with Romeo and Juliet. Everyone knows the story, and everyone knows the end of the story!” he notes. “But it is a miracle that, each time, the audience loves the ballet, the opera or the play. Romeo and Juliet is perfectly magical.”The plot and visuals are consummately supported by the score.“Gonoud’s music seems to me to be perfect,” the director continues.“He chose the right moment to express his talent with the music. He respected the plot very much, and it is very emotional and very moving for people to see it.”Grinda says his job is very much to keep the ship on course and not meddle too much with the original intent.“I try to be very honest toward the opera and to be modern with the way to produce it.”The latter involves a somewhat basic approach to the physical addons.“I didn’t want a spectacular set because you can fill the stage with lots of things, but I wanted a very beautiful but simple set, with a good invocation of the Roman architecture.”The director always keeps in mind that an opera is primarily about the story, and the way the singers perform it vocally and theatrically.“The most important thing in Romeo and Juliet is the couple, those two people. This is not a minimalist production, not at all, but it is very simple and clear, so you can focus on the plot of the story, on the two main characters.”That said, Grinda is keen to make sure we don’t miss the subplots and some of the action going on amid the drama surrounding the titular twosome.“You have people, you have fights and battles, you have a choir, you have dancers, you have everything, but with a very simple and evocative set.”In addition to the timeless storyline, Grinda says the score never fails to bring the crowds in.“It has been a success since the start because the music is very beautiful. It is beautiful all the way through, from the top till the end.”And there is no let-up in the drama either.“The last scene with the two principal characters is a masterpiece. It is so dramatic, and people are obliged to cry. My job is to be honest and to give the singers the opportunity to present themselves in the best way.”As far as Grinda is concerned, there should be no messing with the original temporal framework.“This is Romeo and Juliet during the Renaissance. It is not Romeo and Juliet with a Palestinian and an Israeli, or with black and white. It is possible to transpose the plot, but I wanted to show [it] in the original way. It is a beautiful story so we don’t need to move the time. When you do Romeo and Juliet like [Leonard Bernstein’s 1950s musical] West Side Story, that is a different thing. It is the same plot but with modern music, and with American music. But I don’t need to change Gonoud’s Romeo and Juliet.”Grinda’s quest for production perfection is being ably supported by Italian lighting designer Roberto Venturi and Venturi’s compatriot choreographer Elisabetta Acell, with the glittering singing cast including basses Petri Lindroos from Finland and Soviet-born former Israeli and now Paris-based Yuri Kissin in the role of Friar Lawrence, with mezzo-sopranos Na’ama Goldman and Anat Czarny as Romeo’s page Stephano. The Israeli Opera Chorus, as always, will be on hand to underscore the soloists, under the steady hands of chorus master Ethan Schmeisser, and The Israel Symphony Orchestra Rishon LeZion will provide the instrumental backdrop.

For tickets and more information (03) 692-7777 and www.israel-opera.co.il
Advertisement
Subscribe for our daily newsletter