Meat up at the Station

The B-12 steak restaurant lands in Tel Aviv 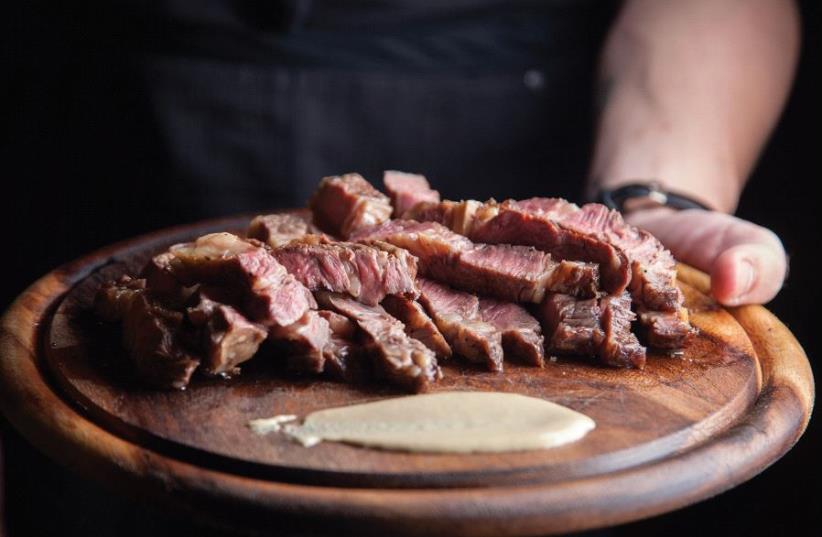 The B-12 steak restaurant
(photo credit: PR)
Advertisement
The spacious plaza sandwiched among Ha’arba’a, Karlibach and Hahashmonaim streets has become a giant combined rear al fresco seating area for quite a few restaurants fronting those thoroughfares, more than a few of which specialize in meat. One of the newer steak and hamburger emporiums is B-12 Meat Station, the first Tel Aviv outpost of a small chain from the Sharon. Open only since the summer, this compact eatery with the large backyard is already making its mark on “beef row.”There appear to be several secrets to B-12’s success: experience in sourcing good quality beef; special electric ovens with compartments that allow the fat to drip down and away from the cooking area; and affordable prices. The weekday business lunch includes a baked potato and small green salad with a main course, for the price of the main course alone.As we perused the bilingual menu, a plate of hamutzim was brought to the table: cornichons that were practically addictive, and a rather lackluster coleslaw.While B-12 does not have any specialty cocktails, the restaurant serves alcohol and has a limited wine list. Especially noteworthy, however, is the eponymous house beer (NIS 26), a private label Belgian-style ale crafted especially for the B-12 chain. The hearty brew pairs very nicely with the menu’s meat offerings.There are three starters, from which we selected the smoked meat (NIS 28/52) and veal asado (NIS 32/56). The former was a bit on the dry side; but the latter – despite being sliced extremely thin – was very moist and quite flavorful.The green salad comes in two sizes (NIS 12/27). We ordered the large version so it would accompany both meat courses. The salad was predominantly lettuce, with shards of cherry tomato and red onion and a sprinkling of tiny slivers of red chili pepper. The house dressing was a zesty vinaigrette that kept the salad tasting crisp and refreshing throughout the meal.The seven main courses are 300 grams of a variety of meats, served either on a wooden platter or in the form of a sandwich on fluffy, piping hot frena bread. There is a third option, mixed into a salad (not recommended).As soon as we saw rib-eye steak on the menu (described as entrecôte in Hebrew), we knew that would be our first choice. The second choice was a bit more difficult, given that the waiter had two recommendations: the veal picanha and something called “side strip of beef filet,” which he described as filet with a thin layer of fat for extra flavor. That explanation tipped the scales in favor of the filet plus.The platters of rib-eye steak (NIS 96) and strip of filet (NIS 68) included a generous smear of mustard spiked with horseradish; mild, coarsely chopped chimichurri; cloves of roasted garlic; and sun-dried tomato.The rib-eye, served sliced and off the bone, was grilled perfectly, with a hint of exterior crust, and a juicy, succulent interior. The Colmans-like mustard, made especially for B-12, was the ideal condiment.The strip of beef filet, meanwhile, was every bit as delicious. And given its price, it was truly extraordinary value for steak of this quality.A baked potato, with a serving of herbed butter on the side, can be ordered for NIS 12.There was only one dessert: chocolate mousse, accented with pieces of candied almond, for welcome crunch. The light and sweet confection was just the right ending to a heavy, satisfying meal.The writer was a guest of the restaurant.B-12 Karlibach Station TLV Not kosher 12 Karlibach St., Tel Aviv Tel: (03) 732-7888