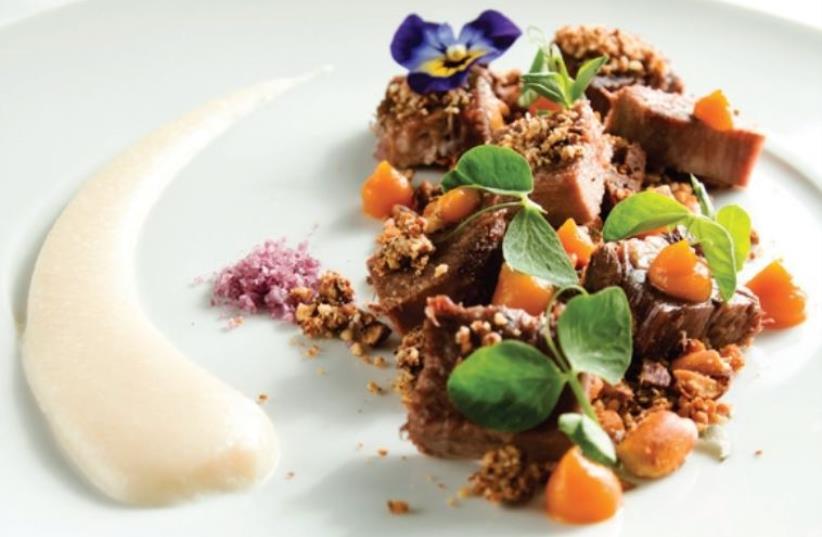 '1868' restaurant
(photo credit: PR)
Advertisement
The historic building that houses the 1868 restaurant has recently been redecorated to be more in line with the contemporary style of the cuisine. Chef and owner Yankale Turjeman is a native Jerusalemite and previously worked as head chef of the former 1868 dairy restaurant and at Kadosh. Having spent a few years working in London, he returned to Jerusalem to run 1868, bringing European style and finesse to the menu.We were delighted to try the full six course tasting menu (NIS 290), but there is also an option for a five-course (NIS 250) or a four-course tasting menu (NIS 210).The advantage of a tasting menu is that you get to eat smaller portions of rich dishes without being too overwhelmed. It was clear that an incredible amount of work went into the preparation of the elements of each dish we tried, and the presentation and service throughout the meal was excellent.Before we even started the meal, we were presented with a small potted plant with various edible additions – olives filled with almonds adorned the branches, and little nibbles of salty marzipan, umami meringues and caramelized peanuts lay at the base of the tree. It was a cute gimmick and included some unusual flavors and textures.So the feast began. While I savored the rich flavors and succulence of the confit of red tuna served with green curry, cherry tomatoes, eggplant, black sesame (NIS 58), my dining partner delighted in the caramelized onion soup with walnut cake, thyme and shallots onions (NIS 49). He found the soup to be flavorful and creamy with a delicate sweetness and unlike any onion soup he had tasted before.The beef fillet tartare with lime cream, yolk pasta and cucumber (NIS 62) was very rich tasty. The use of cucumber juice was unfamiliar – this is not a traditional steak tartare dish.The sea fish tartare with corn, tarragon, ponzo, peanuts, avocado cream (NIS 52) had a surprisingly sweet flavor profile and an interesting mix of elements in the dish.My favorite dish of the night was the seared salmon with jasmine, black garlic, lentils, papaya (NIS 58/98). The salmon was perfectly pink in the center, and the combination of spices in both the salmon and the lentils was delicious. While the other fish dishes we tried were good, none compared with the salmon.When ordering for myself in a restaurant like 1868, I would normally go for a steak or an interesting duck or veal dish but rarely chicken. The advantage of having the chef design the tasting menu is that you try dishes you would not necessarily have ordered. It is hard to describe just how much I enjoyed the boneless organic chicken wings with polenta, fennel and mushroom cream (NIS 54). The chicken was succulent and unbelievably tasty, the fennel was crispy with a slightly sweet touch, and the polenta was so creamy, it was hard to believe it was parve.I really enjoyed the playful elements of the duck breast with fennel, blueberry sauce, beets and licorice crumble (NIS 129). And the slowcooked lamb roast with green peas, lamb and cardamom sauce (NIS 146) was a nice clean spring dish that was clearly inspired by Turjeman’s time in London. But neither compared to the chicken or salmon dishes.We ended the meal with two very tasty desserts (all NIS 49), both of which included a complex combination of textures and flavors.The chocolate and mint comprised three types of chocolate mousse with the mint sorbet and various complementary elements. The rhubarb and blueberry crumble came with panna cotta with spices, caramel and cardamom ice cream and poppy seed ice cream had an interesting East meets West accent., Throughout the meal, we enjoyed the wine pairing (NIS 150 per person), which is an optional addition to the tasting menu. I was already a fan of the Flam Winery and enjoyed the Flam Blanc Unoaked 2014 with the salmon and the Flam Classico 2013 with the red meat. We also sampled the Shoresh 2013 (a blend of Cabernet Sauvignon, Syrah and Petit Verdot by Tzora vineyards) and finished our meal off with Krupnik and Julius Bitters liqueurs by Julius Distillery in the Galil. There is also the option to order from the extensive cocktail menu at Zuta, which is located at the back of the restaurant.1868 offers an interesting and diverse menu with a combination of European charm and Jerusalem history. It is a perfect location for visitors looking for a meal in an authentically Jerusalem surrounding.For those with a smaller budget, the business lunch includes a choice of starter and main course from a limited menu for NIS 88.The writer was a guest of the restaurant.